This National Geographic photo of a U.S. Marine Cpl. Gabrielle Green marching up a steep ramp while carrying a man over her shoulder hangs on the wall of Goldberg’s Washington D.C. office. 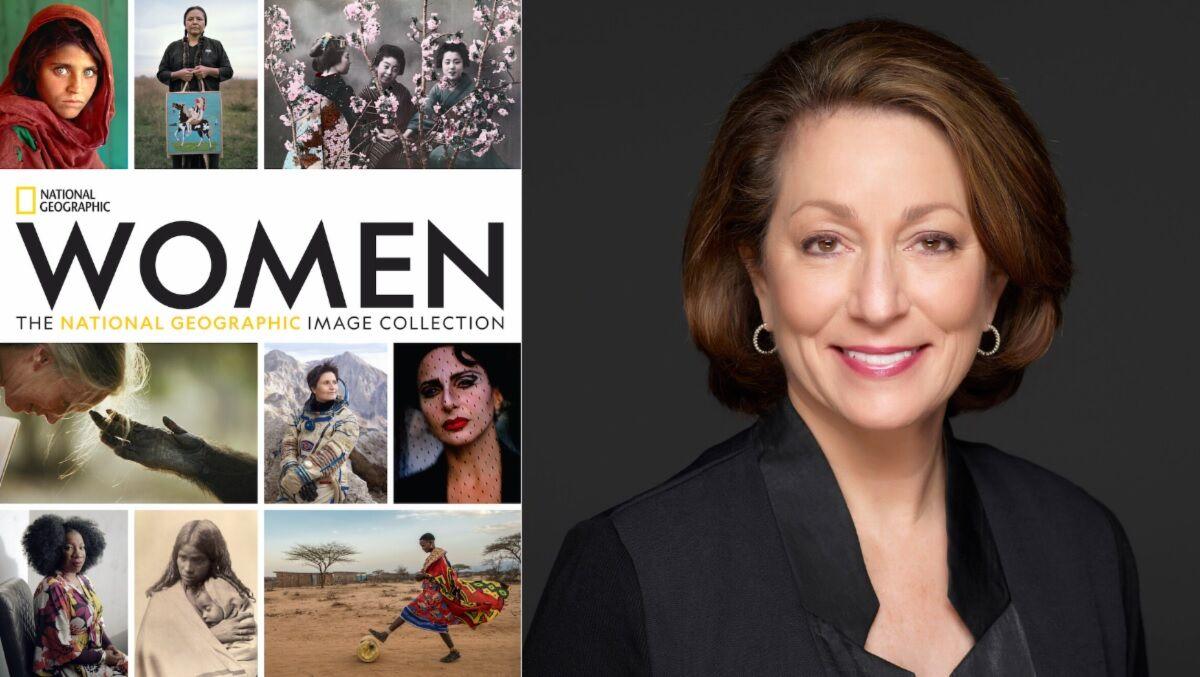 This National Geographic photo of a U.S. Marine Cpl. Gabrielle Green marching up a steep ramp while carrying a man over her shoulder hangs on the wall of Goldberg’s Washington D.C. office.

TRAVERSE CITY — It was 1896 and National Geographic had been publishing its iconic magazine for eight years without the image of a woman — any woman, anywhere in the world — appearing in its pages.

The woman appears standing next to her husband, the photographer is unknown but the image is significant, Goldberg added, because it was the first.

Since then the portrayal of women in the magazine has changed drastically, both because women are doing different things but also because of who is behind the camera, she said.

“We have a lot more women who are taking pictures at National Geographic now and I believe they can capture that story in a different way, perhaps, than male photographers can,” Goldberg said.

The Zulu woman is included in “Women: The National Geographic Image Collection” published in 2019 and edited by Goldberg.

Also in the book is one of Goldberg’s favorite photographs from among the 64 million images in the National Geographic’s extensive archive. A U.S. Marine corporal named Gabrielle Green marches up a steep ramp while carrying a man over her shoulder.

A tattoo on her thigh reads: “The fire inside me burns brighter than the fire around me.”

The photograph was taken while Green was training for a deployment, Goldberg said. An enlargement of the image is framed and on the wall of Goldberg’s Washington D.C. office.

Goldberg is National Geographic’s 10th editor-in-chief since its founding in 1888; the nine before her were men.

She also serves as editorial director of National Geographic Partners, which produces digital journalism, podcasts, maps, newsletters and an Instagram account with more than 100 million followers.

The event is a fundraiser; Goldberg will be interviewed by NWS co-founder and New York Times best-selling author Doug Stanton, and a variety of tickets, some which include entry to a virtual after-party, are available at nationalwriters.org.

“She’s taking the National Geographic in new directions and addressing a lot of the topics that we’ve talked about over the 10 years on the stage of the opera house,” like current events, politics, race and climate change, he said.

Plus, the magazine has a hugely broad appeal, and Stanton believes Goldberg’s story will as well, he said. Its readers know to expect a surprising story from anywhere around the world, and the NWS aims to bring its audience the same.

A special “Can-Demic Club” gives $250 donors a link to the event, a subscription to National Geographic, a custom NWS mask plus a bottle of sparkling wine, delivered to the donor’s front door the day of the event. Entry to the after party with Goldberg is also included.

Goldberg said she sent the pictures of the Zulu bride and the U.S. Marine to Stanton and hopes to discuss both during the event, along with her thoughts on an upcoming National Geographic issue dedicated to the Great Lakes.

Goldberg is a Michigan native, a journalism graduate of Michigan State University who worked for the Detroit Free Press and calls northern Michigan her “favorite place on the planet.”

When she was growing up in Ann Arbor, where her mother was a librarian and her father was a professor at the University of Michigan, her family subscribed to the magazine and she said it was how she first saw the world outside her community.

“It is the honor of my life to be a journalist,” she said.

“We have a lot more women who are taking pictures at National Geographic
now and I believe they can capture that story in a different way, perhaps,
than male photographers can.” Susan Goldberg, editor-in-chief of National Geographic magazine