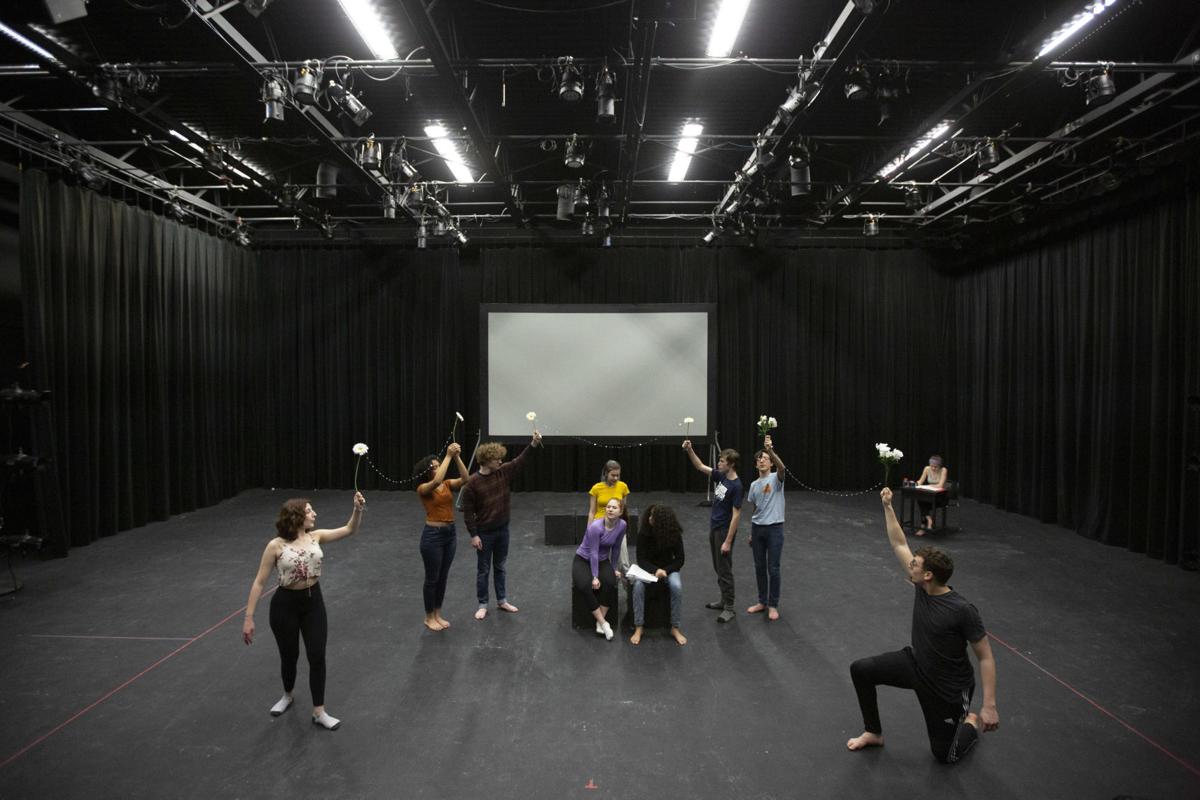 The cast of “Of Green Gables” rehearses at Interlochen Center for the Arts’ Phoenix Theatre in Acme on Tuesday. 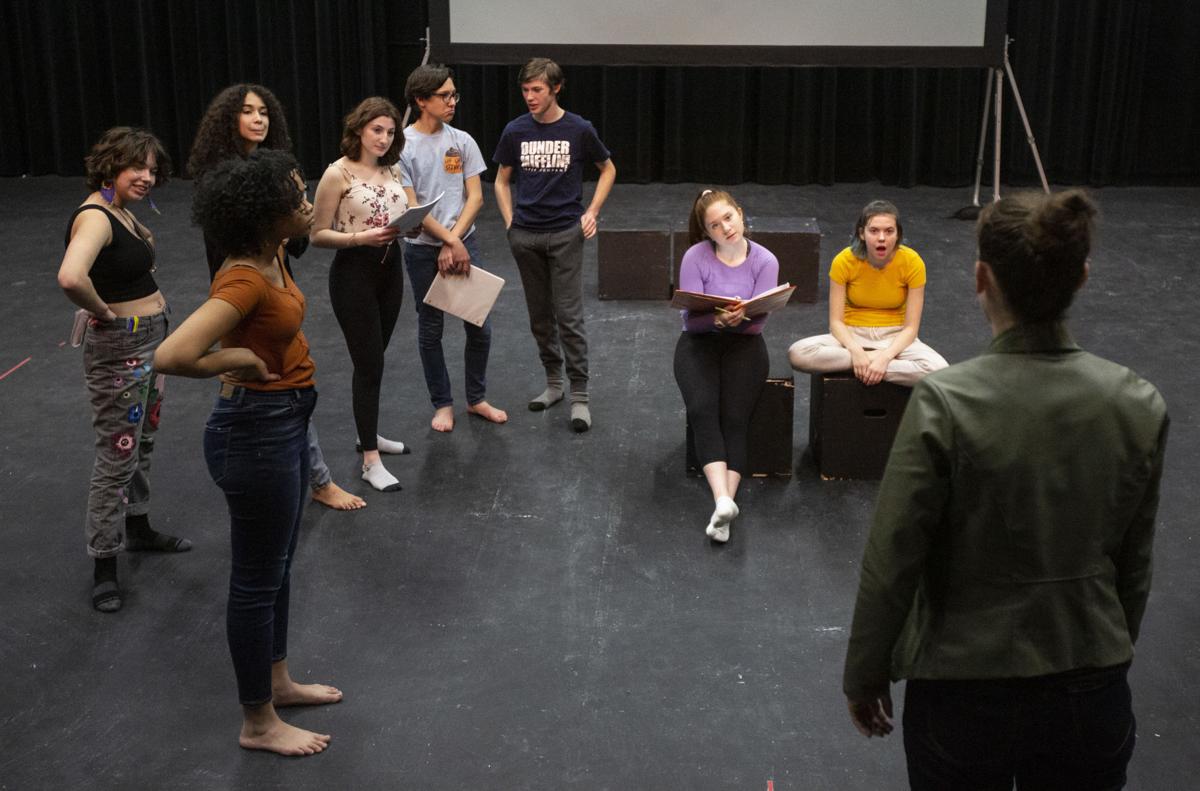 The cast of “Of Green Gables” listens to Director Shelby Lewis at Interlochen Center for the Arts’ Phoenix Theatre in Acme on Tuesday.

The cast of “Of Green Gables” rehearses at Interlochen Center for the Arts’ Phoenix Theatre in Acme on Tuesday.

The cast of “Of Green Gables” listens to Director Shelby Lewis at Interlochen Center for the Arts’ Phoenix Theatre in Acme on Tuesday.

INTERLOCHEN — It took Ivy Libby a few days to realize she wasn’t going to be told, “That’s wrong.”

Mistakes aren’t really a thing in devised shows, said Ivy, a freshman at Interlochen Center for the Arts where she studies theater.

“Everything you interact with in your scene is a new scene partner,” she said. “Nothing is wrong, it’s just a new thing that popped up and we’re going to take it as it is.”

Ivy is one of 11 cast members of “Of Green Gables” — or 11 kindred spirits, as director Shelby Lewis calls them.

“Of Green Gables” is a devised take on “Anne of Green Gables” which explores the novel, the author’s life and the connections cast members drew between what they learned and their own lives, Lewis said.

“I was interested to see if students would even connect with it in 2020,” she said. “To my very pleasant surprise, they have dived into it and couldn’t wait to create.”

Devising is a collaborative way of creating new material in which the collaborators also are the performers, according to the John F. Kennedy Center for the Performing Arts website.

Devised theater begins without a script, unlike a standard theater production, which is the product of a single playwright’s text and a director casting actors and designers to interpret that text, the website states.

“It’s really a hard thing to explain, because it is magical and happens in the room,” Ivy said of devising. Ivy plays the author, Maud — officially Lucy Maud Montgomery.

Cast members had to learn how to be vulnerable in front of each other and “put our hearts out to our work,” said Caroline Bowers, a junior playing Anne Shirley in “Of Green Gables.”

“We went from not really knowing each other to now we are more vulnerable than ever,” Caroline said.

Devising is fairly commonplace in professional theater, but it’s really only just starting to gain a strong foothold in school curriculums, Lewis said. Most of the “Of Green Gables” cast are underclassmen and this production provides an opportunity to take work into their own hands in a way others might not, she said.

It’s not something normally taught at Interlochen, which is why Lewis was brought on, said Bill Church, Interlochen’s director of theater.

Lewis, a Parallel 45 Theatre company member and 2005 graduate of Interlochen, is directing “Of Green Gables” as part of a six-week residency co-sponsored by the academy and Parallel 45, Church said.

Parallel 45 and Interlochen’s partnership — which has a few elements — officially was cemented in 2019, but came after years of working together, he said.

Along with Lewis’ residency, 2019 Interlochen graduates were able to be part of Parallel 45’s company last summer, Church said. It gave those students a chance to work alongside professional actors and actresses, he said.

Each fall, artists from all over the country seeking a place at the MITTEN Lab send in proposals which are narrowed to three- or four by a committee, he said. Those chosen then take part in a week-long residency to develop new work, which then is showcased using Interlochen theater students.

“The most important thing is giving students exposure to professional working theater artists,” Church said. “There are a lot of other high school training programs, but they tend to be in major cities where they can go down the street and see a Broadway show or meet with cast members.

“We don’t have that here,” he said. “By working directly with Parallel 45, I think we’ve really been able to expand opportunities for students.”

“I was interested to see if students would even connect with it in 2020. To my very pleasant surprise, they have dived into it and couldn’t wait to create.” Director Shelby Lewis

"Of Green Gables" runs March 12-14 at Interlochen Center for the Arts' Phoenix Theatre. Shows are scheduled at 7:30 p.m. all three days, with an additional performance March 14 at 2 p.m. Admission is free and tickets are not needed.