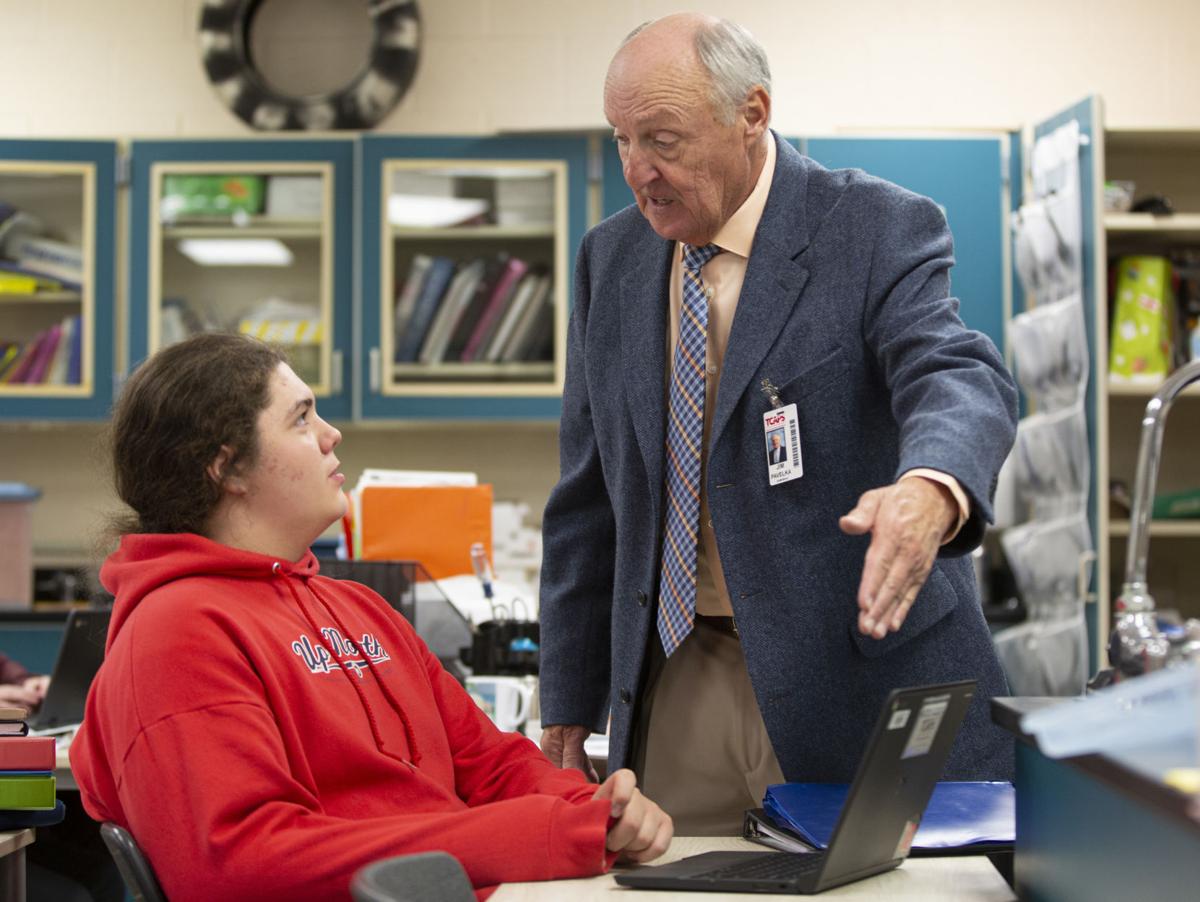 Interim Superintendent Jim Pavelka chats with Talon O’Brien, 13, at Traverse City East Middle School in Traverse City on Thursday. Pavelka was unanimously approved as interim superintendent by the TCAPS Board of Education after Ann Cardon resigned on Oct. 17. 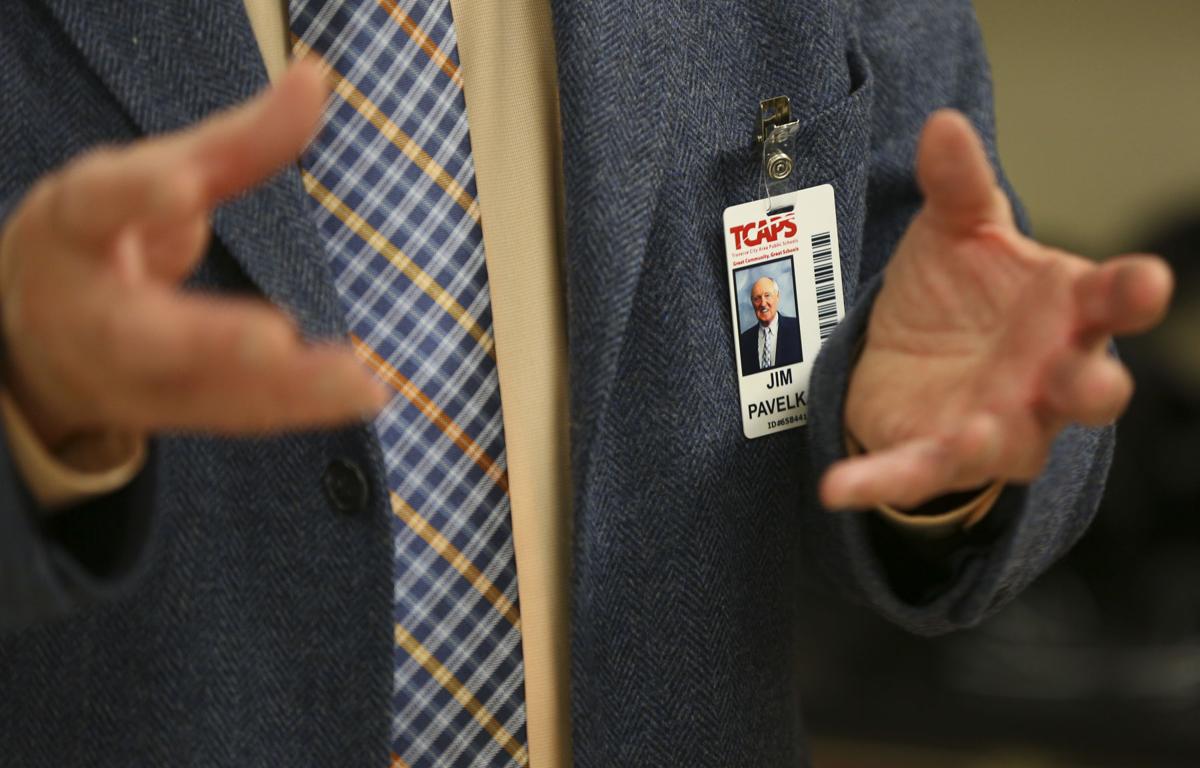 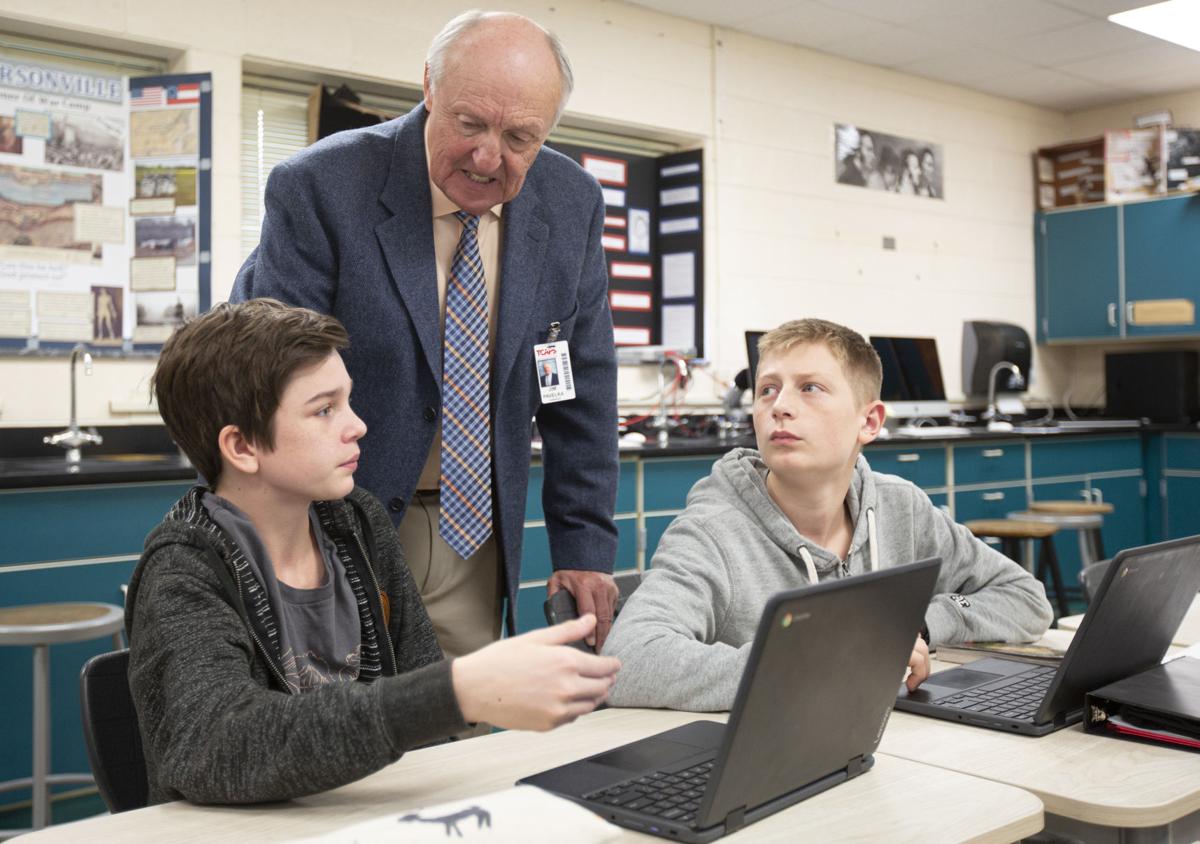 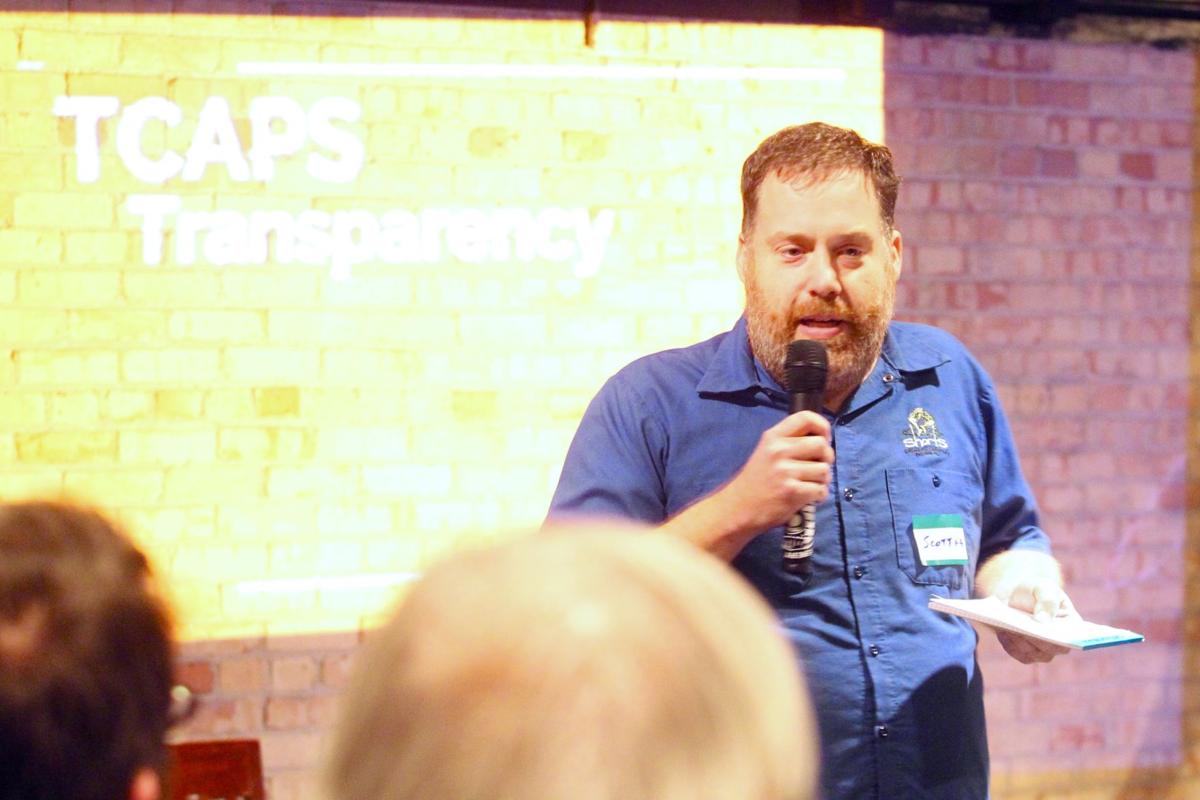 Scott Newman-Bale speaks during the first meeting of the TCAPS Transparency group at the Filling Station on Thursday. The group is calling for more information and accountability from the Traverse City Area Public Schools Board of Education. 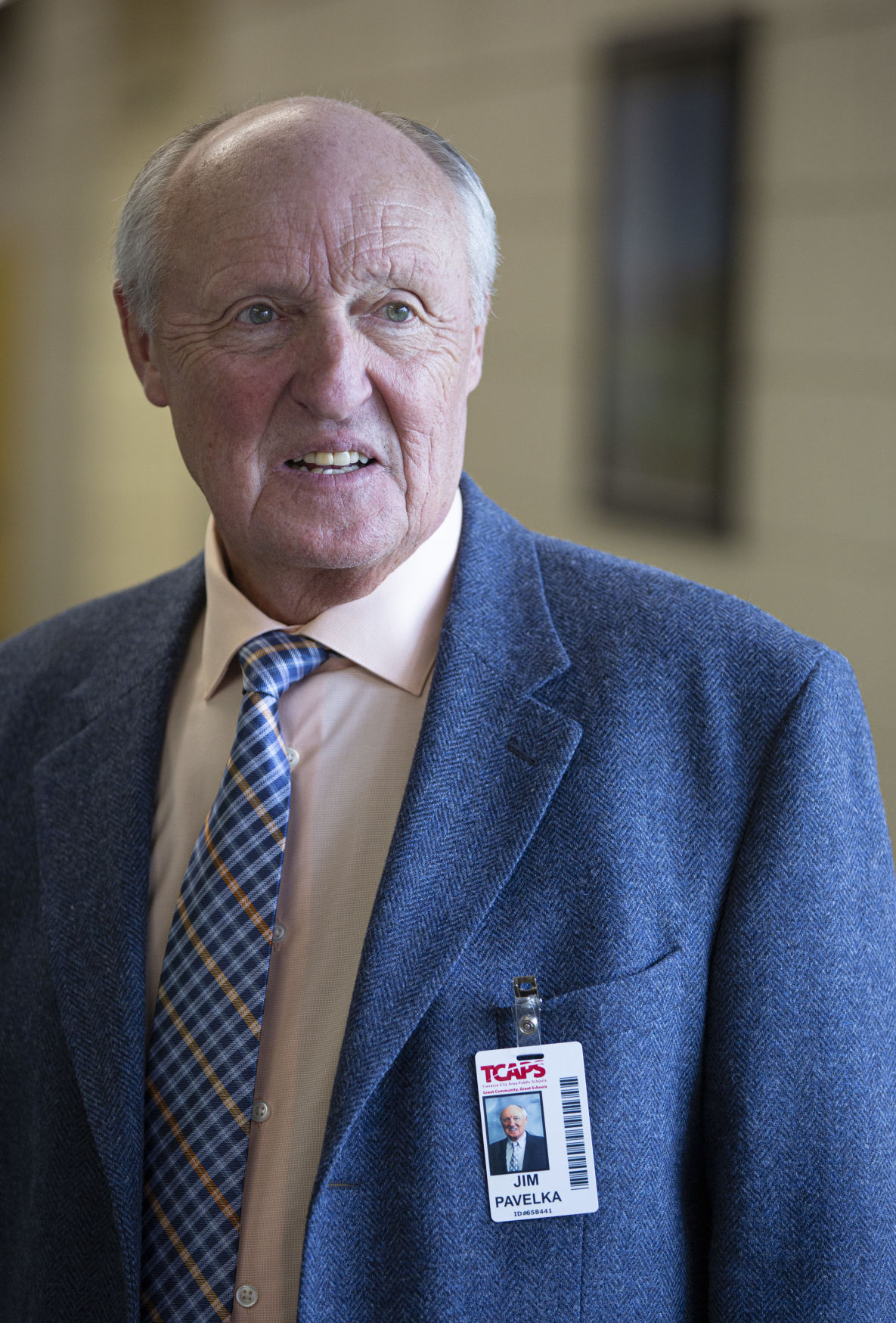 Interim Superintendent Jim Pavelka chats with Talon O’Brien, 13, at Traverse City East Middle School in Traverse City on Thursday. Pavelka was unanimously approved as interim superintendent by the TCAPS Board of Education after Ann Cardon resigned on Oct. 17.

Scott Newman-Bale speaks during the first meeting of the TCAPS Transparency group at the Filling Station on Thursday. The group is calling for more information and accountability from the Traverse City Area Public Schools Board of Education.

TRAVERSE CITY — The dust is starting to settle around Traverse City Area Public Schools after the untimely resignation of former Superintendent Ann Cardon.

But many in the community feel there is still plenty of dust obstructing the view of what is truly happening with the largest school district in northern Michigan.

Nearly 90 people packed the Studio Theater on Thursday for the first meeting of TCAPS Transparency, a coalition of groups that sprung up in the last two weeks when news broke that Cardon was on her way out after 2.5 months on the job.

Many in attendance have vehemently spoken out against TCAPS board actions and a perceived lack of transparency from district officials. Those seeking clarity on why a superintendent hired unanimously would suddenly resign feel they have had to rely on rumors and conjecture.

“All of this is a mutual interest in caring about our kids,” said Ian Ashton, parent of a TCAPS student and a forerunner of TCAPS Transparency. “Having seen the recent activities of our board, it made me angry at first and then it made me really embarrassed.”

The fracture between some in the community and the district goes back further than this latest disruption, but Scott Newman-Bale, a TCAPS parent, said the secrecy behind Cardon’s departure is what finally broke the public’s back.

Building to a boiling point

Grant Parsons, a vocal critic of TCAPS, said his concerns began with the board taking on an “us and them” policy regarding communication with the public. He said relations between the district and community have gone downhill for three years.

“It’s a cascade of events,” he said. “It’s closing the schools. It’s miscounting the students. It’s the budget problem. It’s really a communication problem. This school board has zero connectivity.”

The decision to shutter three schools — Old Mission, Interlochen and Bertha Vos — in 2016 is a wound many feel has not closed, although only two current trustees were on the board at the time.

Todd Klepper, a parent of two TCAPS students, said the division between the board and public can only mend itself with communication on all sides, which means trustees have to be engaged with the community and the community has to be open to hearing from board members.

“There isn’t always a lot of explanation. The whys need to be put out there, even if it’s not what people want to hear,” Klepper said. “Democracy should be a little messy at times, but right now people feel like they can’t trust the decisions being made.”

From 2017-18, trust continued to break down when two separate investigations into former Superintendent Paul Soma’s treatment of subordinates — one of which found Soma was combative with staff members — was met by the board with a favorable evaluation, a raise and an increased retirement package that Soma took advantage of just a week after its approval.

Soma was also front and center in a very public battle with the Michigan Department of Education over how students at the Northern Michigan Partnership, the district’s now-defunct virtual homeschool program, were counted. Soma and TCAPS lost that fight, resulting in nearly $2 million in state aid being reclaimed from the district.

Embattled state Rep. Larry Inman, who is set to stand trial for attempted extortion, solicitation of a bribe and lying to an FBI agent, secured $700,000 to cover some of the hit for TCAPS in a lameduck congressional session in December.

Questions arose about when Soma knew of the issue with NMP, when he told board members and what steps he took to keep the matter from the public eye — once again causing community members to question the transparency and ethics of those in top leadership positions at TCAPS.

A highly contentious campaign for five open board seats began weeks before area voters overwhelmingly approved a $107 million capital projects bond proposal from TCAPS in August 2018. A slate of candidates known as Team5 TCAPS were critical of how the district, specifically Soma and others on the executive team, handled its finances as well as relations with TCAPS employees and the community at large.

Only one on the slate, Erica Moon Mohr, earned a seat on the board while Sue Kelly, Matt Anderson, Pam Forton and Jeff Leonhardt breezed to victory.

Trustees then officially adopted MI Excel’s Blueprint — a strategic system used to allocate the district’s resources — in January after hearing several times from former MI Excel Executive Director Grant Chandler. Moon Mohr often questioned, both publicly and privately, the efficacy and purpose of the Blueprint, but she said she never fully received any satisfactory answers.

Chandler, who was named in February as a consultant to assist the board with the search for a new superintendent, was placed on leave by the Calhoun Intermediate School District, which runs MI Excel, in July while being investigated by the MDE for impropriety regarding Title I funds.

The Blueprint, along with the district’s fight for equitable state funding, remained primary focal points during the process of hiring a new superintendent, with some trustees expressing a candidate fit for the job had to be in line with the TCAPS view.

Trustees drew a battle line in the fight for equitable state funding in May, unanimously approving a resolution that called for all districts to be funded at the same per-pupil figure and disavowed the conclusions from a Michigan School Finance Research Collaborative study. Kelly confirmed the differences between Cardon and some board members about equitable funding and the SFRC was a cause of friction, and some believe that ultimately made the relationship with the superintendent untenable.

Former TCAPS Trustee Scott Hardy had high hopes for Cardon, saying that she had “the background and professionalism to take the district to the next level.”

Instead, board members remained mired in what Hardy said was a losing battle for equitable funding. Hardy said the resolution condemning the SFRC was “a colossal waste of goodwill at the state level.”

“It’s become a fair amount of white noise in the background,” Hardy said. “In the process of beating that drum we’ve lost some focus — and I did the same thing because I was on the same bandwagon — on instruction and on classroom performance. We need to re-energize what we are charged with, and that’s teaching kids in this district.”

Kelly said the relationship with Cardon reached a point of no return after Moon Mohr revealed information from a closed session portion of the Oct. 7 meeting. She said the community was “riled up about stuff they didn’t even know was going on.”

“The minute the information that Erica wrote was released to the media, a frenzy happened and we couldn’t even recover whatever relationship we had,” Kelly said. “Whether that was board relationships or superintendent relationship, the district was certainly compromised.”

Moon Mohr laughed off the notion, pointing to conversations with Cardon who expressed an inability to function in the district if Kelly, Leonhardt, Forton and Jane Klegman remained trustees.

Movements are now in the works to oust several of the board members who have terms that run through 2022. Klegman and Leonhardt are up for re-election in November 2020, so those with TCAPS Transparency don’t feel a recall attempt against them is prudent. Instead, they intend to focus on Kelly and Forton as they gameplan how to get the necessary 11,700 signatures and $40,000 to force a special election.

Kelly said those board members are “standing by their integrity” and not resorting to or responding to attacks against them. She questions the recall efforts and wonders what trustees have done to spur such a challenge.

“Have they failed in any of their duties? Why are they being asked?” she said. “They have yet to display any untrustworthy business. They’re holding TCAPS to the very highest level possible. They have maintained their oath of office.”

Taking the reins (for a while)

The board turned to former TCAPS Superintendent Jim Pavelka to guide the ship on an interim basis before bringing on a long-term fit. Pavelka held the district’s top post from 2000 before retiring in 2005.

Pavelka spent his first full week speaking with staff and students, but he has not had any detailed conversations with Kelly about how long his interim tenure will last. He is under the assumption that it is “not a one-year, two-year, three-year commitment,” but instead to ensure there are no breaks in services to the students.

“You have the mistrust from a situation that developed with the previous superintendent and the board. I don’t want to let this impact moving forward — and it has a potential to do that,” Pavelka said. “I don’t know what took place in the past. I can’t change the past, but I’ll do everything I can to help the community and the board learn from this.”

A community at odds with its school district is not uncommon, said Pavelka, who spent 19 years as the superintendent of the Allegheny County Intermediate School District.

He understands the public wants to know what happens behind closed doors, but he also knows some information must be kept private.

Yet he concedes that it is nearly impossible to move forward as a district without public trust and support.

“What we need to do is to look for the common good. You just look at what we have in common. I don’t think anybody wants bad for the school district. Right?” he said.

What some feel is bad for the district is for those in decision-making positions to remain there.

Newman-Bale said TCAPS Transparency is intent on turning the situation from a negative to a positive.

“Now we have the momentum to make a change,” he said. “As painful as this process is going to be, hopefully in three to five years time, this is going to be the best thing that’s happened to us — and we’re going to turn in that way. We’re already turning the tide to bring it back together.”