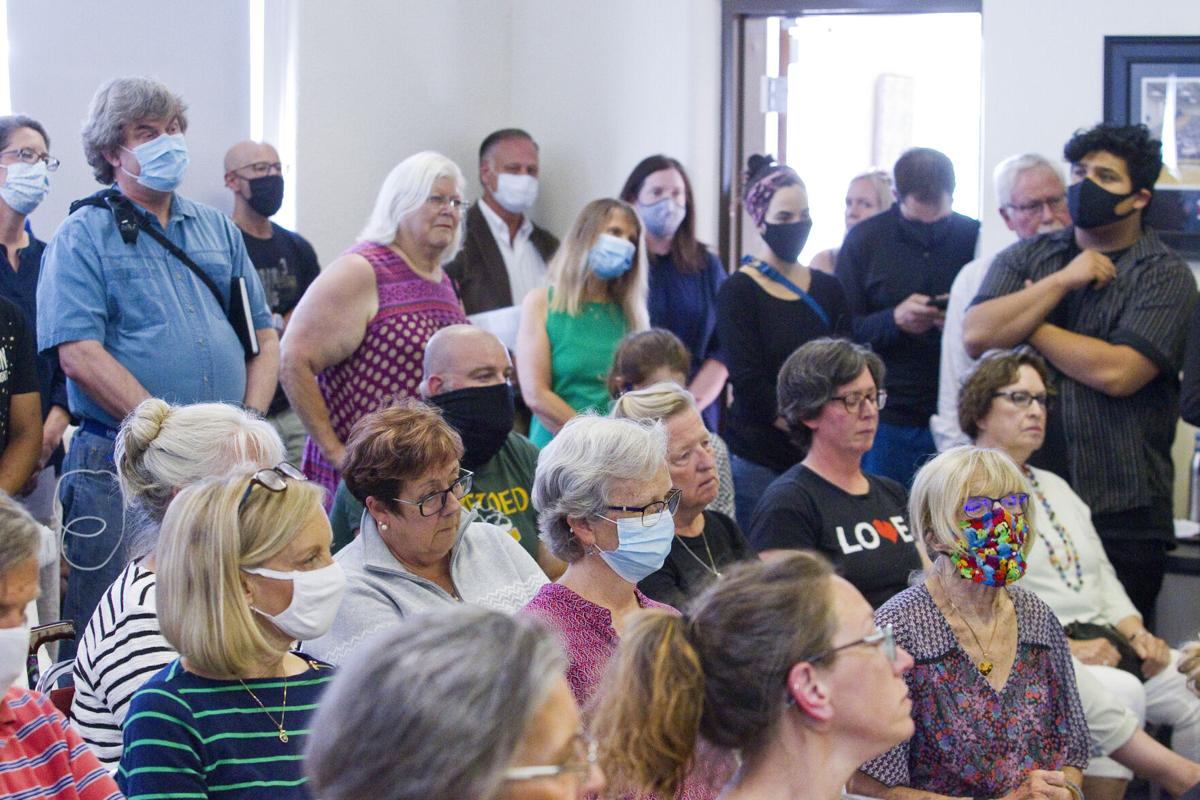 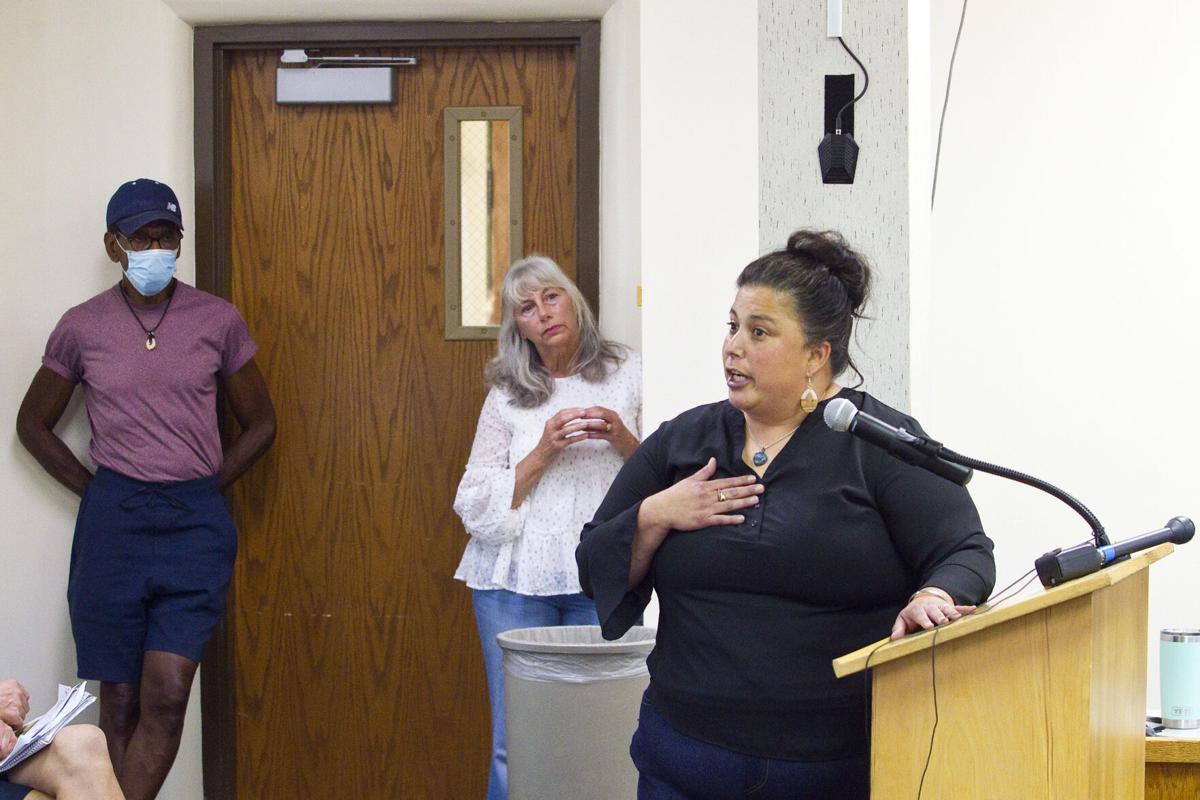 Alma Vasquez speaks during a Traverse City Area Public Schools Board of Education meeting on Monday evening in Traverse City. 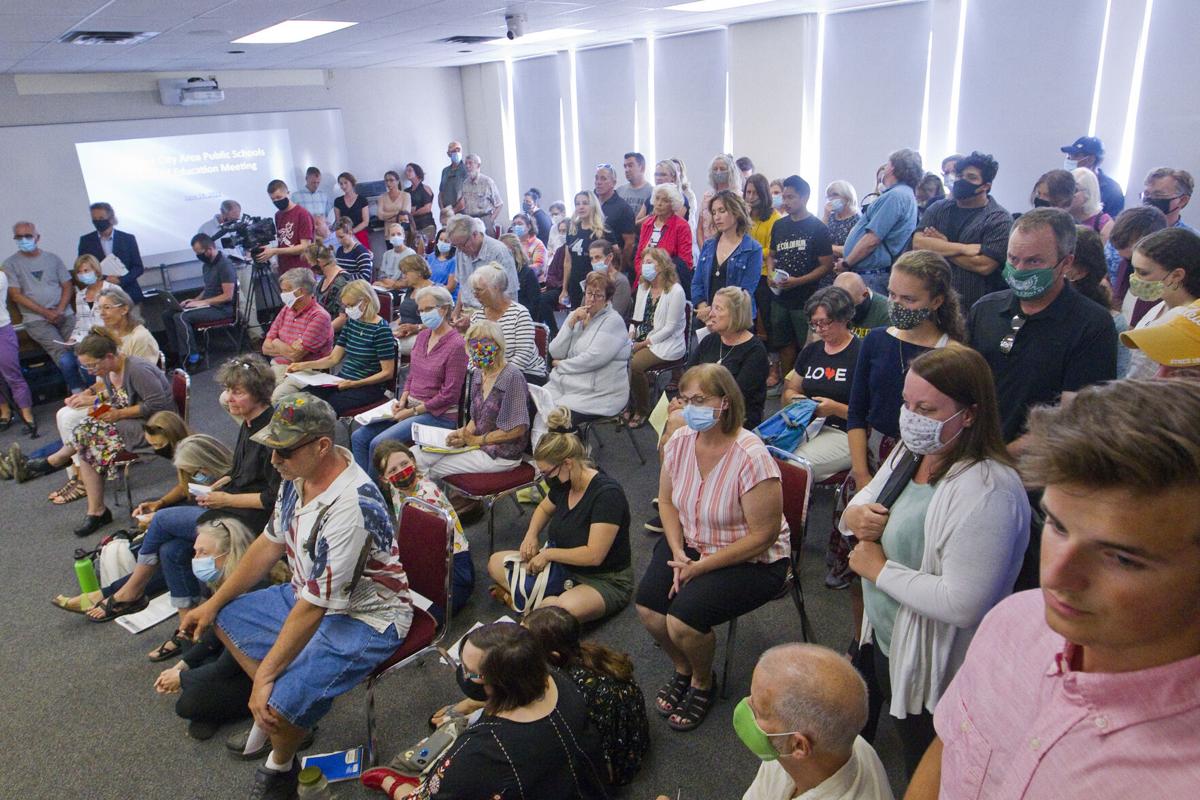 Alma Vasquez speaks during a Traverse City Area Public Schools Board of Education meeting on Monday evening in Traverse City.

TRAVERSE CITY — Marshall Collins has a simple question: What are you for?

Collins, a Black man, is part of Northern Michigan E3, a local anti-racism task force, as well as the Social Equity Task Force at Traverse City Area Public Schools. He and others — both in and out of the school district — have been instrumental in crafting an anti-racism and anti-discrimination resolution for the TCAPS Board of Education to consider and possibly adopt.

But those efforts stirred controversy in northern Michigan and created a split that led to hours of public comment either decrying the task force and the resolution or wholeheartedly supporting it.

TCAPS trustees have had some robust conversation on the proposed resolution. Although there were some disagreements over wording and content, all agreed on the passage that states TCAPS is “committed to providing a safe and inclusive learning environment that promotes equity and affirms the humanity of all members of our staff, students and community.”

Other parts of the resolution state that hate and racism have no place in TCAPS, that TCAPS must create and nurture a place where every child is respected and valued for who they are, and that TCAPS must actively prevent racial bias and discrimination.

The pushback against the resolution has Collins confused.

“If you’re against that, then what are you for?” he said. “I’m kind of getting tired of explaining that people of different backgrounds and different races are treated differently. If you’re not seeing it, then you’re trying to not see it. People really need to open their eyes.”

Much of the criticism surrounds the perception that the resolution and the task force are trying to change TCAPS curriculum. The resolution, which has not been voted on but will be discussed at the June 28 board meeting, does state the board would support opportunities to increase equity learning, elevating underrepresented voices and eliminating bias and prejudice in the curriculum.

Some believe that means wholesale changes and adoption of new curriculum. TCAPS Director of Curriculum Andy Phillips said that simply is not the case, and that officials are only assessing what can be done to make the current TCAPS curriculum more inclusive to all students.

“We want make sure that we’re representing diversity in authors, diversity in characters in the books kids are reading. We’ll be making sure there is cultural diversity in the content we’re teaching in social studies courses,” he said. “We’re not adopting a curriculum. It’s about highlighting the areas where we need to add some things in.”

Critics, however, are conflating the TCAPS effort with Critical Race Theory, a subject gaining national attention because of legislative efforts to stop it from being taught in schools.

CRT was developed in the 1970s and argues that white supremacy maintains its power in the United States through the legal system and that racism is not the acts of individuals but instead rooted in a system of oppression built on racial hierarchy that affords white people advantages and benefits people of color do not get. Phillips said CRT is not present in TCAPS curriculum nor is it being used to examine current curriculum.

But some, like Hannah Black and Darcie Pickren, remain skeptical.

“Schools have been revising their curriculums ... and basically saying we’re going to cancel math and English to bring in these social justice studies instead,” Pickren said at a recent meeting of the TCAPS curriculum committee. “It sounds like we’re going to be teaching our kids our country is founded on racism and show them that if they’re white, they’re privileged and they’re part of the problem. I find that mind-boggling.”

Black has children in the TCAPS system, and she said she would pull her kids from the district if the board passes the resolution as it is and continues the work of the equity task force without more input from the public with opposing viewpoints. She suggested hosting an open forum or a community poll to get feedback before any action is taken.

Black told the board she believes the resolution is “laced with Critical Race Theory” and questioned the need for such a resolution because the TCAPS handbook already had policies in place against discrimination.

“I find this discriminating against all peoples,” Black said. “It narrows and reduces us to our skin color. I choose not to judge by the color of their skin but the content of their character. That was (Martin Luther King). Wake up. This is the opposite of what MLK lived and died for.”

Controversy surrounding CRT continued to ramp up as the Biden administration approved making Juneteenth — June 19 — a national holiday. Juneteenth celebrates June 19, 1865, which was when the final group of enslaved Black people were told of their freedom. This came two months after the Confederacy surrendered and two and a half years after the Emancipation Proclamation freed slaves in the South.

National efforts against CRT began in September 2020 when former President Donald Trump said it and “the crusade against American history is toxic propaganda, ideological poison, that — if not removed — will dissolve the civic bonds that tie us together, and will destroy our country.” Trump supporters and some conservatives have taken up the mantle against CRT and made their presence felt at school board meetings throughout the country.

Public comment at recent TCAPS board meetings had been dominated by those speaking out against the task force, against the resolution and against any changes to the curriculum that follows CRT. One such meeting included a woman using a racial slur twice, although she did not direct it at anyone or anything.

Collins attended that meeting and the others. He was disappointed by what he heard.

“That’s racism,” he said. “People in the community now see some of the things we’ve been talking about for a long time. That right there is proof of why we need this awareness.”

More than 100 people showed up to the June 14 meeting, even though the board was not discussing the resolution. Sixty-five spoke during the two public comment sections. The overwhelming majority of speakers were in favor of the both the task force and the resolution, urging TCAPS to continue its work toward creating equity, diversity, inclusion and belonging in the district.

Retired TCAPS teacher Rhonda Busch said the opposition to the resolution was built on misinformation.

The Michigan Department of Education’s Building Mirrors and Windows initiative focuses on making sure every student sees himself or herself in the literature the school teaches. Nancy Schulte said she supported the effort to analyze the current curriculum and then work to include more diverse offerings.

“Allowing children to see themselves reflected in literature and giving them information about the culture of others does not equate to indoctrination,” Schulte said. “It informs and allows for growth and exploration, discussion and questioning. That is the essence of an education that fosters a thriving democracy.”

All of the comments — both for and against the resolution — were followed by applause. The loudest, however, came after Estelle Young stepped to the podium.

The sixth grader from Traverse City West Middle School referred to herself as a “future leader of the world.” She recounted instances of racism and other discrimination she’s seen at her school. That is why students need to be taught about those topics, she said.

“Ignoring this current problem won’t fix it,” Young said. “We need to take action and educate our youth.”

Michigan Senate Bill 0460, which was introduced by Republican state Sen. Lana Theiss, threatens to dock a school district 5 percent of its state funding if CRT or any “anti-American” and racist theories are part of the curriculum.

The ambiguity of the “any anti-American and racist theories” has some educators worried how broadly that can be applied to curriculum. Others are concerned about lawmakers introducing political arguments into an apolitical setting.

Keven Cross, a semi-retired U.S. history teacher in northern Michigan, said any such legislation — even a proposal — is a slap in the face.

Teaching about race and racism, the good and the bad of America, is a must in any history course, he said.

“You can’t avoid it,” Cross said, adding that teaching about those topics is not the same as installing Critical Race Theory into curriculum. “I don’t see any way that you can legislate it away from our history or legislate students to not learn about it. This is a huge chunk of our history, and we’d be doing a disservice to our students to not talk about it.”

The systems that are in place to limit opportunities to certain groups of people is part of American history, Cross said, be that slavery or discriminatory policies against Irish immigrants in the late 19th and early 20th centuries. Yet Cross admits that much of what is contained in U.S. history books has been sanitized to wash away some of the dirtier, more shameful parts of America’s past.

Many have pointed to the Tulsa Race Massacre of 1921 as a prime example of sanitization. Hundreds of Black people were injured or killed and Black-owned businesses and homes were destroyed by mobs of white people in the riot. Cross said he never learned about the massacre in middle or high school nor did he learn about it in his undergraduate studies.

But now, that information is a Google search away, Cross said. To gloss over that incident and other examples of institutional racism in a history class won’t go over well with today’s students, Cross said.

“The 2021 student is so much more informed,” he said, comparing the level of student activism today to the 1960s. “They’re the ones who are going to confront teachers. You’re going to be in front of the classroom, and these students are going to call you out: ‘Hey, how come you’re not talking about this?’”

Although the discussion about race and racism — as well as other forms of discrimination — is a difficult one to have, Collins said it should not be avoided just because it makes people feel uncomfortable.

Progression is the goal, he said.

“We’ve been complacent with where we’re at,” Collins said. “We have to move the needle on race relations, and we’re doing that. You have to be able to understand and look at another person’s life through a different lens — through their lens.”