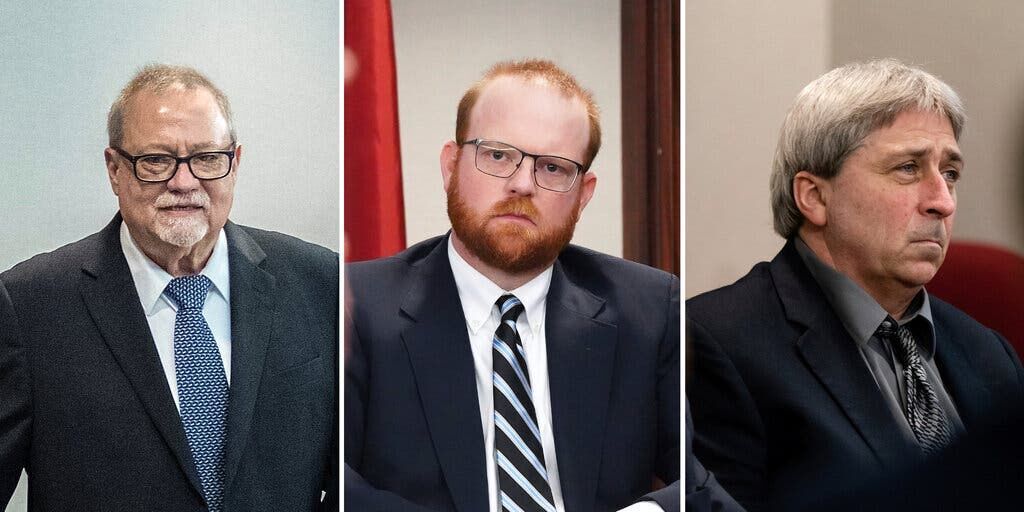 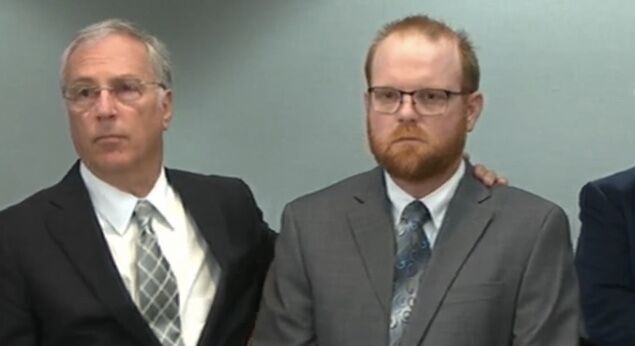 Travis McMichael, right, was found guilt of all nine charges in the murder of Ahmaud Arbery. He with one of his attorneys, Robert Rubin, as the verdict is read Wednesday.

BRUNSWICK, Ga.— After more than 11 hours of deliberation, jurors — 11 white and one Black —delivered guilty murder verdicts Wednesday on three white men accused of killing a Black man jogging in the street of their Brunswick, Georgia neighborhood.

The jury found Travis McMichael guilty on all counts in the murder of Ahmaud Arbery; one count of malice murder, four counts of felony murder, two counts of aggravated assault, one count of false imprisonment and one count of criminal attempt to commit a felony.

Greg McMichael was found guilty on all but the malice murder charge.

William Bryan received guilty verdicts in more than half of the charges—three of them for felony murder, and a guilty verdict for aggravated assault, false imprisonment and criminal attempt to commit a felony.

In Georgia, a person convicted of murder can be sentenced to life in prison with or without the possibility of parole.

Closing arguments in the trial had wrapped up Tuesday with prosecutors saying Travis McMichael, Greg McMichael and William “Roddie” Bryan were unlawfully chasing and following Arbery through the Satilla Shores neighborhood when he was ultimately shot and killed by Travis McMichael after a five minute pursuit Feb. 23, 2020.

The McMichaels argued they were attempting to perform a citizen's arrest on Arbery, who they believed was responsible for the burglaries at a home under construction; Bryan later joined the pursuit upon seeing Arbery run by his home with the McMichaels following behind in their pickup truck.

The McMichaels said they had planned to hold Arbery until police arrived; however, after five minutes of Arbery being blocked and followed throughout the neighborhood, Arbery and Travis McMichael appeared to tussle over the gun during which Arbery was shot two times and killed.

On day 12 of the trial Monday, the state and attorneys for the three defendants gave closing arguments, with the state giving a final rebuttal Tuesday.

Before jurors left the courtroom around 11:30 a.m. Tuesday, Judge Timothy Walmsley read and explained the charges against the three men— malice murder, felony murder, aggravated assault and false imprisonment. He also defined the state's citizen's arrest, self defense and use of force laws as it related to the charges.

Attorney Jason Sheffield had argued that Travis had reasonable and probable grounds of suspicion that Arbery had committed a burglary.

He mentioned Travis’s Feb. 11, 2020 call to 911 to report that a Black man—later known to be Arbery— had just run into a home under construction 220 Satilla Drive. He told the 911 operator that the man appeared to reach into his pocket before running into the doorless home, and that he could be armed.  The man was gone by the time police arrived.

The Satilla Shores neighborhood also had a Facebook page where residents often reported petty crimes or suspicious persons in the neighborhood, Sheffield said.

“It was unsettling that people were lurking and creeping around your property at night,” Sheffield said. “…This neighborhood was being covered with suspicious persons.”

English had reported some tools missing from a boat on the property but never saw anyone on surveillance taking them.

While the state argued that Arbery was a frequent jogger in the neighborhood, Sheffield said “there’s no evidence that Ahmaud Arbery ever jogged or exercised in Satilla Shores.”

Travis was inside his home a few houses down on Feb. 23 when his father Greg McMichael ran inside telling him to grab his gun because the “guy” that broke into the house the other night was running by, Sheffield said.

As he ran to his truck with his shotgun, Travis said he saw a neighbor pointing in Arbery’s direction.

In his closing arguments Monday, Sheffield led with Travis’s U.S. Coast Guard policing and rescue training where he learned how to make decisions, use of verbal commands, de-escalation techniques and when to use deadly force.

“He talked about de-escalation techniques and how that was always the goal,” said Sheffield of Travis’s testimony on the stand last week. “You have the right to stop and detain a person and hold them for the police…If Travis wanted to hurt him, he could’ve right away. Is it offensive to pull up to someone to try to talk to them?”

Travis followed beside Arbery in several attempts to ask what he was running away from, and when Travis told Arbery he had called the police, Arbery took off running in the opposite direction, Sheffield said.

The planned citizen’s arrest went left after Travis parked his truck on Holmes Street near Satilla Drive, an area Travis had testified was a good location to observe where Arbery would run. Travis and his father allegedly saw Arbery approaching a black truck—later identified as Bryan’s— and attempting to get into the driver’s side door.

After approaching the black truck, Arbery ran back to the McMichaels direction,  and Travis then pointed his shotgun at Arbery, Sheffield said.  As Arbery ran around the McMichael’s parked truck, Travis testified that he moved to the front of the truck toward Arbery to see which way he may be headed.

At that point, Arbery turns toward Travis and a tussle over the gun ensues. Two of three shots fired strike Arbery who attempts to run away before falling dead in the street.

“The only time life was in danger was when Arbery chose to cut across that truck and come at Travis,” Sheffield unsuccessfully argued.

Travis shot Arbery in self-defense, his attorneys maintained throughout the trail.

Greg McMichael was trying to be a good neighbor, attorney had argued

Defense attorney Laura Hogue inexplicably said the state was “turning Ahmaud Arbery into a victim in a situation he created.”

“A good neighborhood is policing itself,” said Hogue. “…the police can’t be everywhere. Police are helped by those neighbors.”

Hogue had argued that Greg McMichael had reasonable and probable grounds Feb. 23, 2020 to believe that Arbery was tempting to escape “yet again.”

When he saw Arbery run by his home, he was certain that Arbery was the man he had seen on video surveillance shown to him by an officer after Travis McMichael’s Feb. 11, 2020 call to 911, Hogue said.

“There’s no doubt in my mind as to who this guy was,” Hogue quoted from Greg McMichael’s interview with an officer after the shooting.

Greg’s knowledge of Arbery returning to the vacant property “night after night,” Hogue tried to say, constitutes “immediate knowledge” needed for him to perform a citizen’s arrest.  She said Greg also had reasonable grounds for suspicion of Arbery commenting burglary of the home due to things being stolen from a boat on the property.

“Ahmaud Arbery wasn’t an innocent victim when he was plundering around Mr. English’s house,” Hogue said, later inexplicably describing Arbery’s baggy shorts and “long dirty toenails.”  "There was no reason for him to be there… he was a recurring night time intruder and that is frightening and unsettling.”

Hogue said had the McMichaels not chosen to attempt to detain Arbery that day, the fear of crime in the neighborhood would have continued.

“He died because for whatever illogical reason, instead of staying where he was, he chose to fight…To run at a man wielding a shotgun,” Hogue said.

Bryan didn’t know co-defendants, could not know' that Arbery would be shot, counsel said

Attorney Kevin Gough unsuccessfully argued that Bryan’s presence was “irrelevant” to the death of Arbery and that he wasn’t aware the McMichaels had guns until the final seconds of the video he recorded from his black truck.

Gough described Bryan as a quiet man who keeps to himself, adding that even though he’d lived in the Satilla Shores neighborhood for three years, the majority of his neighbors didn’t know him.

When Arbery ran past Bryan’s house with the McMichaels following behind,  Arbery did not ask for help or to call 911, Gough said. When Bryan got into his truck that day to see what was happening, he did not bring any weapons— he only grabbed his keys and cell phone, Gough added.

“Roddie Bryan knows ‘intuitively’ when someone’s running to or away from something,” said Gough of Bryan’s decision to join the pursuit. “…Roddie Bryan acted in good faith on the day in question. Roddie wasn’t aware that Travis had intention to shoot Arbery.”

Gough said in Bryan’s attempts to follow and corner Arbery, Bryan was not speeding or driving fast, as the state presented no evidence that Bryan was “hunting him down” or aggressively driving.

“What does Mr. Bryan’s presence have to do with anything? The McMichaels were certainly capable of catching up with [Arbery] and shooting if that was there intention,” Gough said.

Prosecutor Linda Dunikoski said the trial was based on “driveway decisions and assumptions.”

The McMichaels assumed Arbery had done something because he ran by their house “fast” and they chose to arm themselves with guns, she said during the trail.

“They started it, they don’t get to claim self-defense,”  Dunikoski said.

During her rebuttal Tuesday, Dunikoski discredited Travis’s claim that he saw a neighborhood pointing in Arbery’s direction before he and his father got in their truck to pursue Arbery.

Surveillance video she showed jurors Tuesday appeared to show that neighbor pointing in Arbery’s direction after the McMichaels were already in their truck.

“Should you trust the statements of Travis McMichael?” She asked jurors.

Dunikoski said during the McMichaels’ interview with police after the shooting, neither of them mentioned that they were trying to perform a citizen’s arrest. Greg McMichael —who was in the bed of the pickup truck with his own gun — was on the phone with 911, moments before the shooting, and did not indicate what crime Arbery had committed.

“What’s your emergency? There’s a Black man running down the street?” Dunikoski said.

Dunikoski also referenced a police interview in which Greg McMcMichael recalled telling police he told Arbery to stop or he’d blow his head off.

“What right do they have to demand a fellow citizen talk to them  and cut him off with their trucks?” she said.  She also made reference to Greg McMichael telling a neighbor on the scene after the shooting, “This guy’s an ... ....(expletive).

Dunikoski said Bryan became a party to the crime with his attempt at falsely imprisoning Arbery with his truck helped lead to Arbery’s death, forcing him to run back in the direction of the McMichaels.

Greg McMichaels had told police that Arbery was “trapped like a rat,” she said.

Dunikoski said no weapons personal items or stolen items were found on Arbery at the time of his death, and that the McMichaels had no immediate knowledge if Arbery had committed a crime that day.

“This guy’s running away from them for five minutes…you can’t defend yourself after you created the situation. You can’t commit a felony against someone and claim self defense," she said.

Dunikoski said Travis McMichael’s pointing of his shotgun at Arbery, and the two trucks being used to corner and attempt to block in Arbery led to the state’s recommended aggravated assault charges.