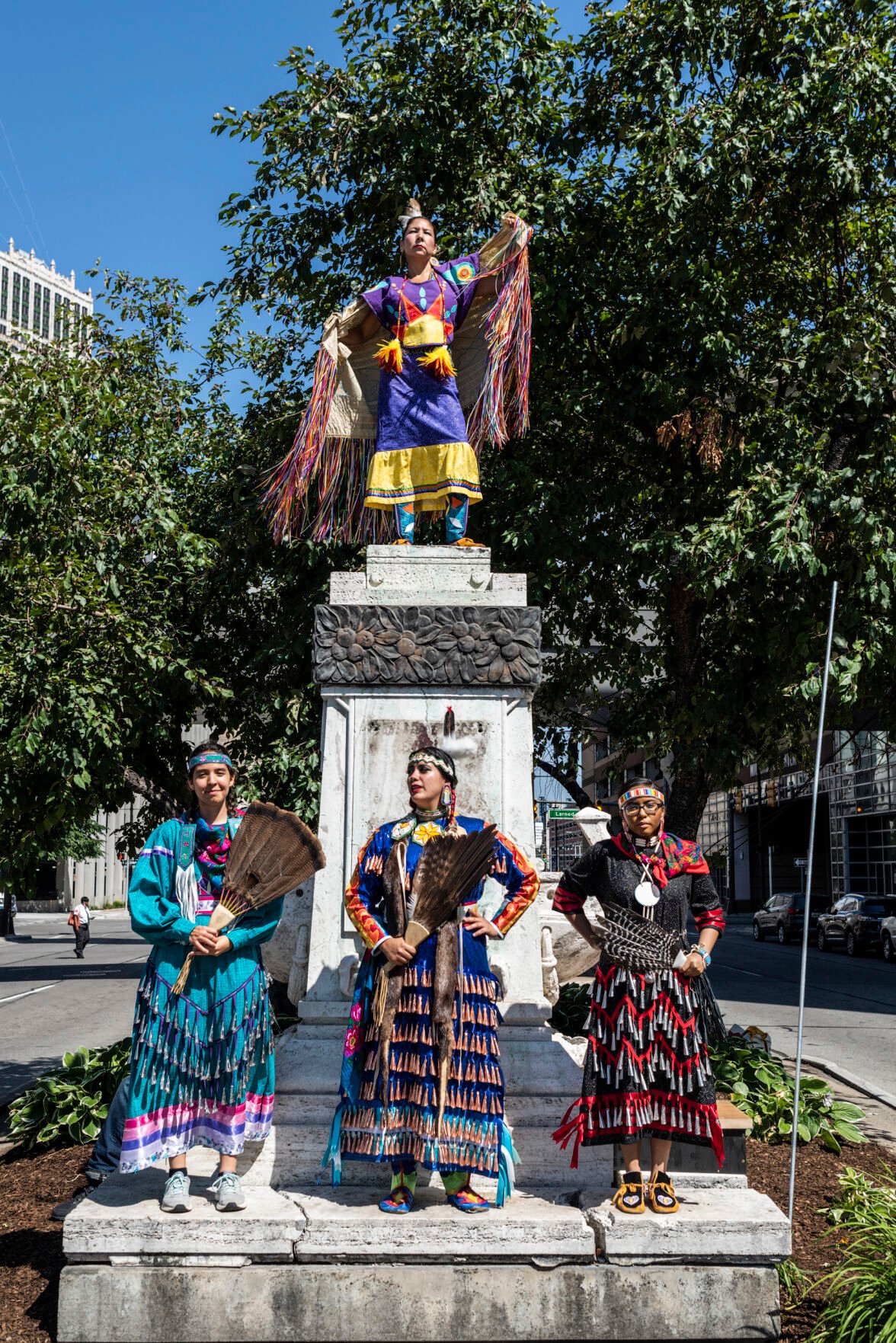 Courtney Miller in fancy dance regalia, Teia McGahey, Hadassah GreenSky (Waganakising Odawa), and Joelle Joyner (Black & Meherrin), all in jingle dress regalia stand at the site where a statue of Christopher Colombus once stood in Detroit. 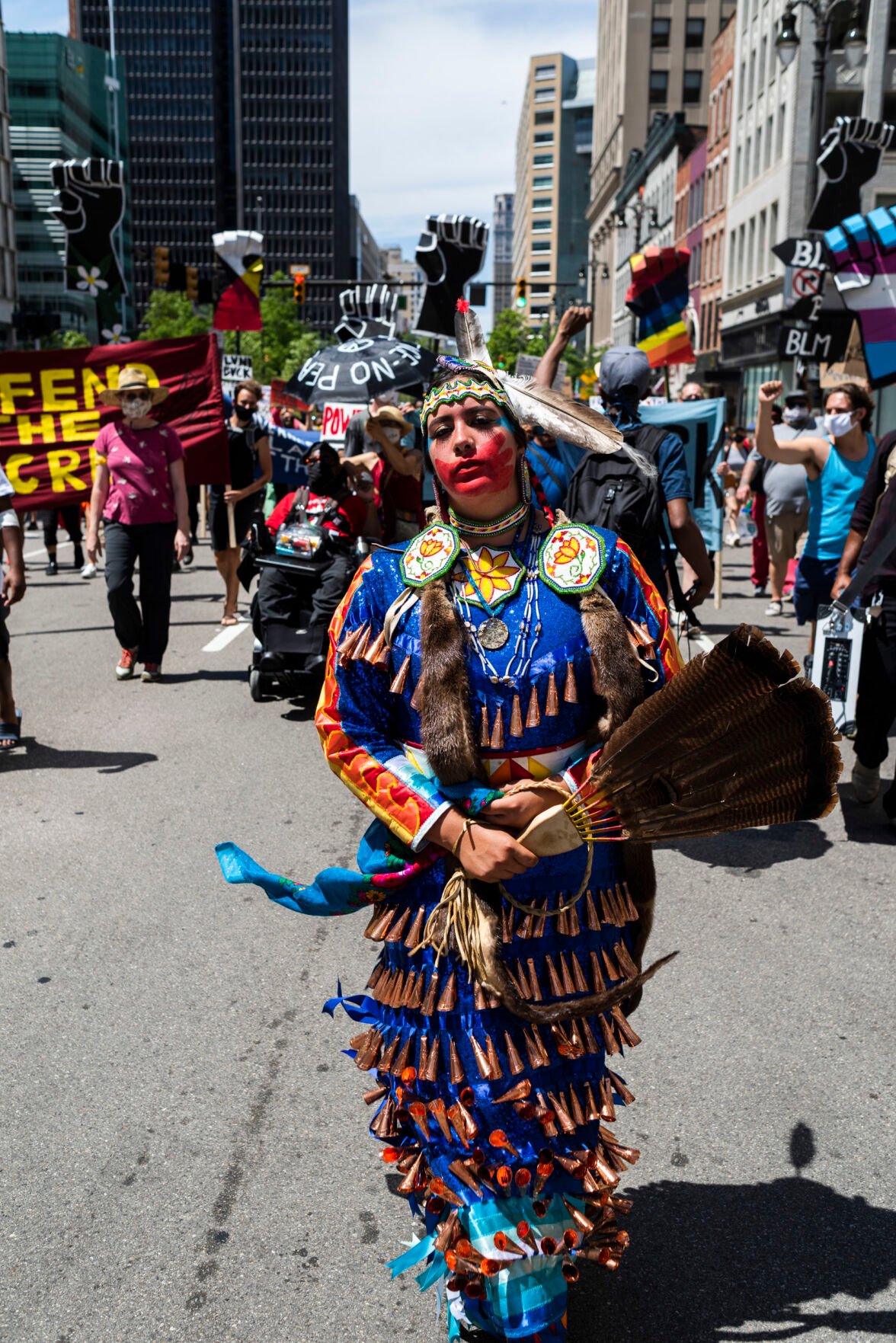 Hadassah GreenSky marches in Detroit at the head of of the LVN BVCK movement with Frontline. 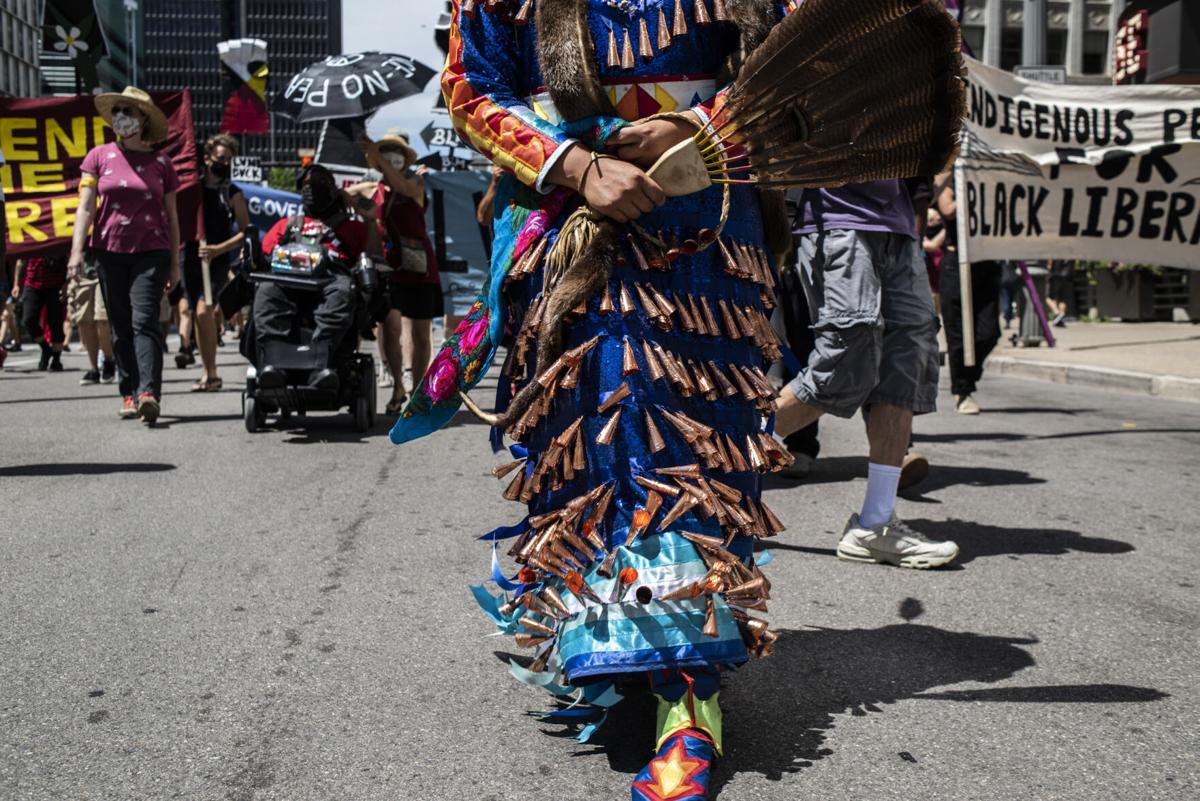 Hadassah GreenSky's jingle dress regalia has become an integral part of her appearances at decolonization movement events across the country.

Courtney Miller in fancy dance regalia, Teia McGahey, Hadassah GreenSky (Waganakising Odawa), and Joelle Joyner (Black & Meherrin), all in jingle dress regalia stand at the site where a statue of Christopher Colombus once stood in Detroit.

Hadassah GreenSky marches in Detroit at the head of of the LVN BVCK movement with Frontline.

Hadassah GreenSky's jingle dress regalia has become an integral part of her appearances at decolonization movement events across the country.

DETROIT — On July 1, four Indigenous women were photographed in downtown Waawiiyaatanong (Detroit) wearing full regalia and standing on the remains of a monument to Christopher Columbus.

That photograph, four Indigenous women donning traditional jingle dresses, and standing on the pedestal once occupied by a statue of Columbus, became the most widely circulated glimpse of a movement that brought together Indigenous activists who for decades have been advocating for equal rights and other people of color in cities and towns across the U.S.

Wearing a jingle dress is a form of resistance and a symbol of healing in the Anishinaabe Nation.

Hadassah Greensky said she has been jingle dress dancing since childhood, when she was called to healing through a dream.

Greensky and her fellow Anishinaabekwe danced during the long Fourth of July holiday weekend as part of a grassroots movement aptly named, Waawiiyaatanong Resurgence. The colonial holiday weekend coincided with Miin-Giizis (Blueberry Moon), a full-moon that is both culturally and spiritually important to Anishinaabe communities.

In this instance, the decolonization movement is not a transactional pursuit of land as “property,” said Ian Tran, Waawiiyatanong Resurgence medic and organizing member, to the Record-Eagle.

“It is about reclaiming the intrinsic relationship with the land that forms people’s existence through their geographical, cultural, and spiritual connection with place and history,” Tran said.

This means bringing Indigenous knowledge and lifeways to colonized spaces — places where Indigenous communities thrived prior being removed during European expansion.

The decolonization movement encompasses a wide spectrum of action from public acknowledgments of historical mistreatment of Indigenous communities to returning land to tribal ownership.

Kyle Whyte, Professor and Timnick Chair in Humanities at Michigan State University, described colonial ideals as a historical power structure that “dispossesses people of the relationships of interdependence they have with other people, the land and with the plant and animal communities.”

“Decolonization is land-based liberation and entails an entirely different social, economic, political, and cultural situation for Indigenous, Black, and other groups who suffer colonialism,” Whyte said.

GreenSky, who is a citizen of the Little Traverse Bay Bands of Odawa Indians, recalls life growing up in the Detroit suburbs as devoid of Indigenous culture despite the city’s history as a hub for tribes in the region.

She often felt like the “lone Indian,” in school, only able to connect to the land when visiting her ancestral territory near Petoskey and Charlevoix.

She said she’s reclaiming her identity in everyday endeavors, like putting on her jingle dress to pray and heal.

Greensky said she felt her two worlds — Indigenous and suburban — collide as the sounds of drums reverberated off nearby buildings during the holiday weekend protest.

“It was just like a war cry,” she said. “It felt like we were time traveling because the sounds and energy were not of the city ... it was like I was with her [the land] presently and in the past.”

That day, more than 350 people from Waawiiyatanong Resurgence and Frontline Detroit turned out at Campus Martius Park, a space that is argued to be linked to downtown development and gentrification. Jingle dress dancers, drummers, and singers then traveled down Woodward Avenue — a road built over one of the oldest Anishinaabe trails in the state and named for Judge Augustus Woodward, who, despite writings against slavery and progressive court decisions, was a slave owner.

Parallel to the ceremony in Detroit, hundreds of miles north in Biidasssige (Petoskey) Anishinaabe gathered to sing, drum, and heal through jingle dress as well.

Smith helped organize the event with Awaken Petoskey, and said it’s important for Indigenous people to stand up when Black people or people of color are being oppressed.

“All people of color are from an Indigenous population,” she said. “They came from somewhere and they belong to the land. As Indigenous people, we have a connection to our lands.”

Waawiiyaatanong Resurgence emphasizes Black and Indigenous communities coming together over shared experiences, inviting others beyond Detroit.

“Black people are stolen people on stolen Indigenous land,” GreenSky said. “Our narratives are not quite the same but there’s a lot of similar struggles and symptoms.”

Anishinaabe (Ojibwe, Odawa, and Bodewademi) and Chicano activist Sacramento Knoxx said the Waawiiyaatanong Resurgence was born after he awoke from a dream in late May. He said his spirit ancestors “smacked him awake to start the sacred fire.”

“Urban natives are all often left out of the picture with the discussion of decolonization and land back,” Knoxx said. “That’s something that we really wanted to put some focus on especially in the Detroit area. I feel like we really need to connect and see what we can do to uplift and support each other.”

According to Waawiitaatanong Resurgence, the movement is “rooted in Anishinaabe Meshkikiwiin” which “demands a halt to the continuous step of colonization,” and includes “honoring Black lives as our relatives.”

The movement isn’t just an Indigenous and Black movement. Instead it is an effort to change the way people act and think throughout the society and provide acknowledgement of the way the system benefits some groups and oppresses others.

Knoxx said organizers are planning more events that will interrogate Detroit’s colonial history and dream of a new future for the city’s Black and Indigenous peoples.

Meanwhile GreenSky continues to take her call for decolonization to communities outside Detroit.

She recently traveled west to Lakota Land to once again dance for all her relations.

“It’s rooted in our ancestral ways ... so these are things that we think about on a daily basis, and that’s one of the things we keep thinking about in this project,” she said.

This reporting project was produced in partnership with the Mishigamiing Journalism Project, a grant-funded effort that grants journalism fellowships to emerging Indigenous journalists.

What’s in a Name?

Anishinaabe: "the original people” is a broad term for the group of culturally-related Indigenous peoples who reside in what is now Canada and the United States. In Michigan, Anishinaabe include the Odawa, Ojibwe (Chippewa), and Bodewadmi (Potawatomi), which make up the Three Fires Confederacy.

Indigenization (Indigenize): to make Indigenous, subject to Indigenous influence. It requires for non-Indigenous to be aware and respectful of Indigenous culture and views, and to incorporate local Indigenous knowledge, and perspectives in education, policy, and law.

Hebrew name Yaakov, leapt from his body into the ethers of the great beyond on March 23, 2020. Please join Joel's daughter, Emily Magner, for a Celebration of Life from 2 to 4 p.m. on Sunday, Aug. 1, 2021 at the Historic Barns Park Pavilion, at the Grand Traverse Commons. You're invited to w…

TRAVERSE CITY [mdash] Orlin H. Benedict Jr., age 96, of Traverse City, passed away Friday, March 5, 2021 at the Grand Traverse Pavilions. He was born and raised in Milwaukee to the late Orlin and Lillian (Hanney) Benedict. He honorably served our country during WWII as a Lieutenant in the Ar…

80, of Traverse City, died July 12, 2021. He is survived by his wife, Claudia J. McBath; sons, George Michael (Kelly) McBath and Andrew Arthur (Samantha) McBath; grandchildren, Jack and Jacob; and sister, Kathy (Dave) Hentz. Memorial contributions may be made to his family to help with expen…