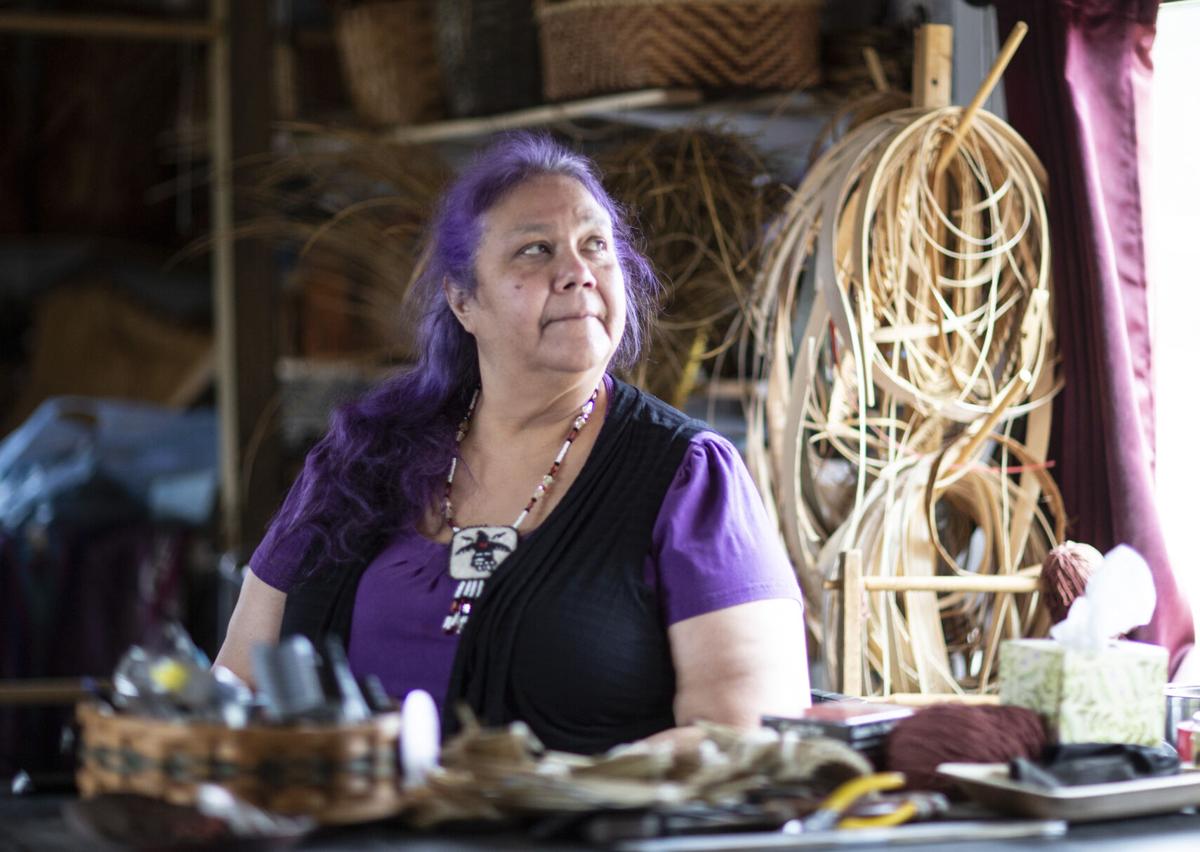 Wasson (aka Renee Dillard) poses for a portrait in her studio in Harbor Springs on Wednesday. 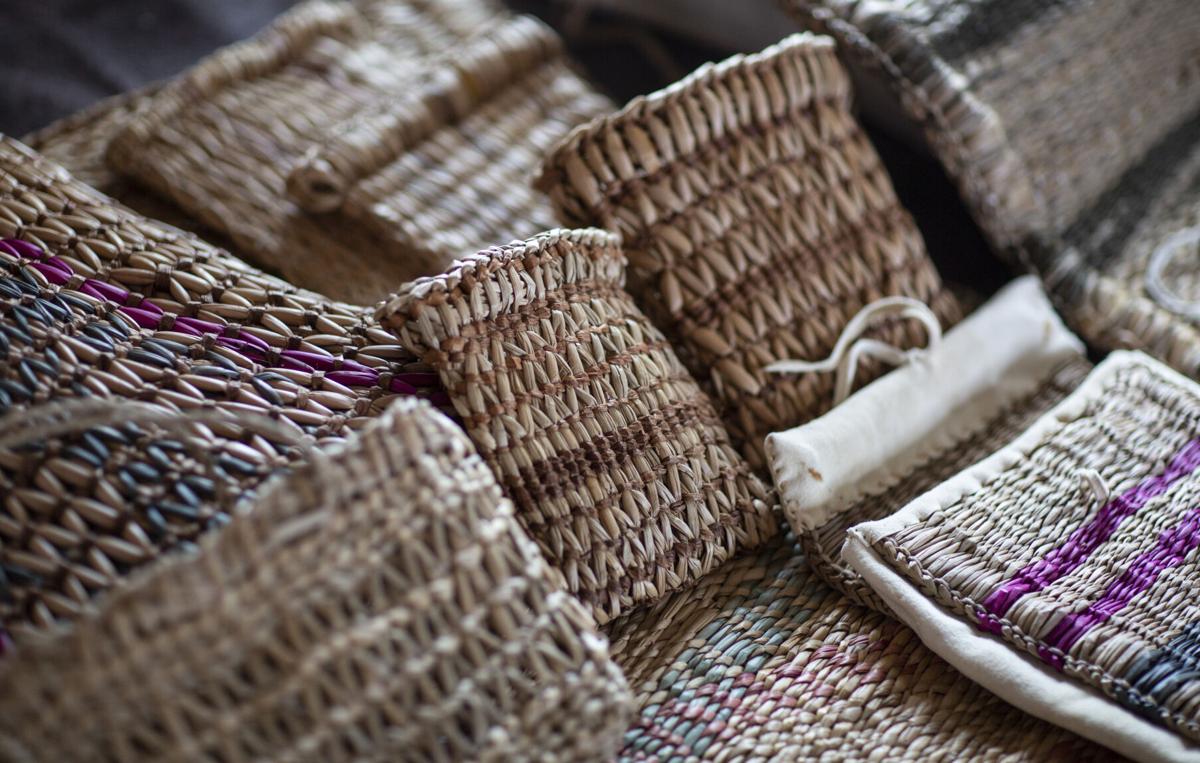 Bulrush bags and mats are displayed in Wasson’s studio in Harbor Springs. 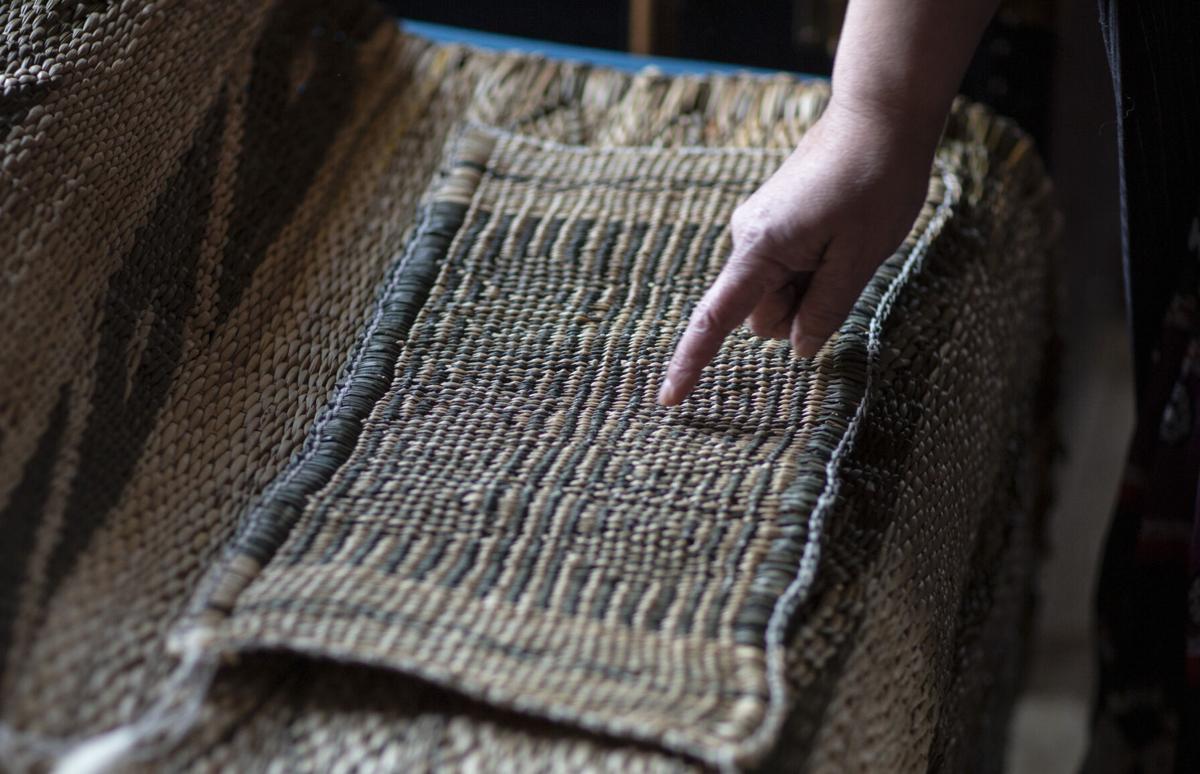 Wasson points to a bulrush mat in her studio in Harbor Springs on Wednesday. 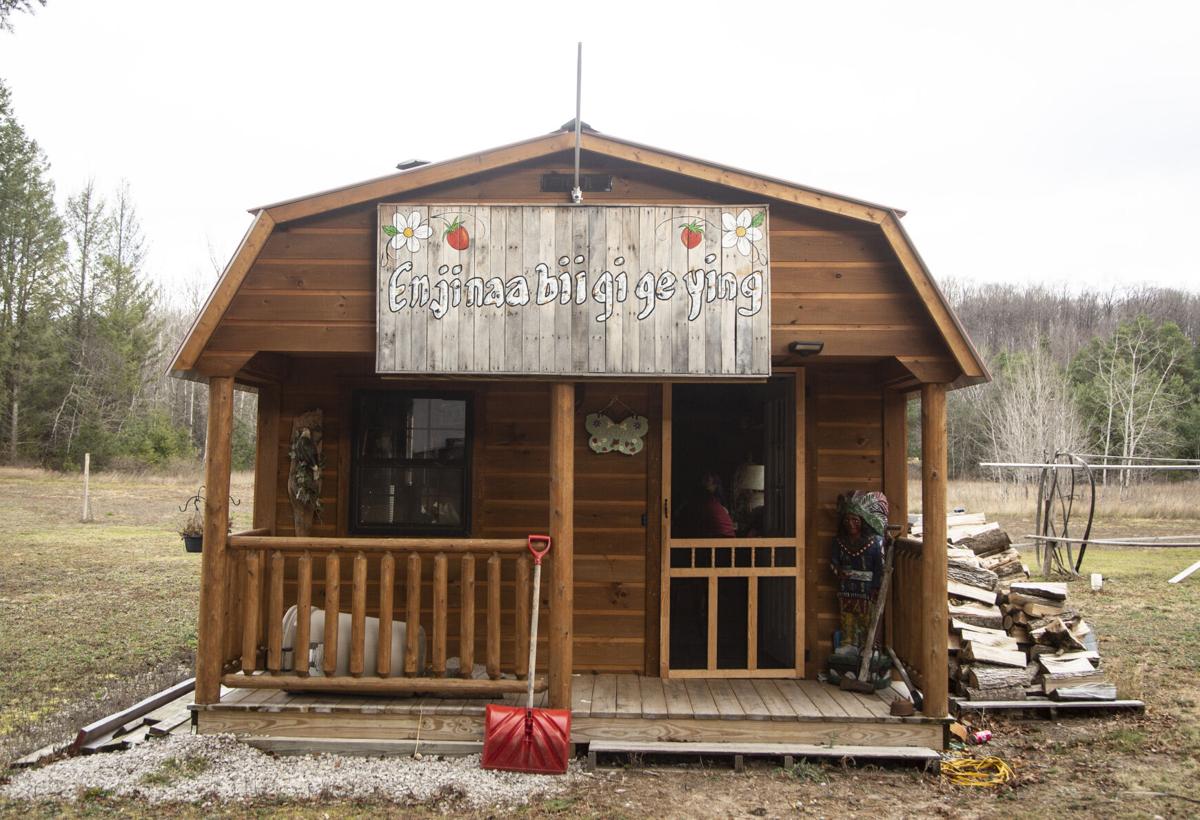 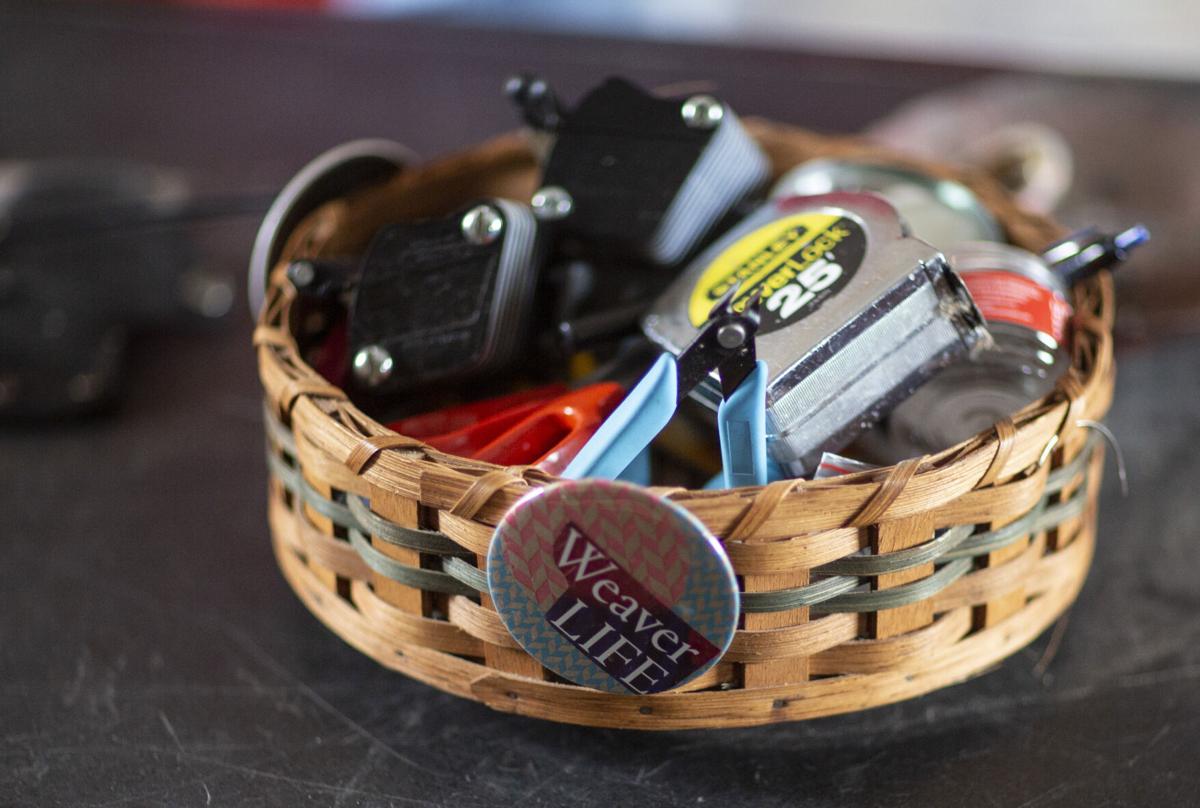 A tool basket sits on Wasson’s desk in her studio in Harbor Springs on Wednesday.

Wasson (aka Renee Dillard) poses for a portrait in her studio in Harbor Springs on Wednesday.

Bulrush bags and mats are displayed in Wasson’s studio in Harbor Springs.

Wasson points to a bulrush mat in her studio in Harbor Springs on Wednesday.

A tool basket sits on Wasson’s desk in her studio in Harbor Springs on Wednesday.

PETOSKEY — Wasson (aka Renee Dillard) stood on the shore of Lake Michigan just east of the Straits of Mackinac, directing a group of volunteers while they waded into the water toward a swath of anaakanaashkoon — known in English as softstem bulrush.

The tall, fragile plants stretched along the coast as far as the eye could see.

She normally brings about 25-30 people at a time to harvest, but today the group numbered less than 10, all Indigenous women and some children from the surrounding counties. They carefully steadied themselves to avoid being knocked over by waves.

They left the water’s edge with plants that would sustain them spiritually and physically — but according to Wasson, the practice of harvesting itself was the gift.

“It’s the time spent at the lake, listening to the surf, watching the water, seeing them dance with each other in the water,” she explained.

Anaakanashk are mostly found just off the shorelines and beaches of North America and Eurasia. They’re self-pollinators, meaning that they are both female and male.

Weaving anaakanashk into mats was an important part of the Ojibwe culture before first contact, because the mats had so many different purposes.

Some were used on the insides of the walls of traditional dwellings, or as partitions or floor coverings. Some were used in ceremonial spaces. The purpose for each was woven into the mat by the maker.

Wasson explains the anaakanaashkoon are said to be the first water protectors, because they naturally filter the water. And, in fact, they are frequently used in wetlands constructed for wastewater treatment.

The plant is robust, and is not considered threatened, but it is sensitive to changes in water levels. And, Wasson said she thinks that the anaakanashk of today are smaller than their pre-colonization counterparts, because they have to work harder to deal with pollution.

She carefully plans each year’s harvest to ensure that it’s sustainable and the area isn’t left bare. This age-old practice is sometimes known as the “Honorable Harvest” — a term coined by Indigenous ecologist Robin Wall Kimmerer — meaning only what is needed will be taken in that spot.

She tries to harvest in areas with limited human interaction, that are the most undisturbed by daily life. She visits the bulrushes intended for harvest before bringing her class with her, so that she can introduce herself, tell them what she’s going to do, and show gratitude for their sacrifice.

“You’re reconnecting with the mother, the Earth.” Wasson explains, “In the process, along with creating a relationship with that plant we have to go in and say hello, this is who I am. This is what’s going to happen to you. I want to thank you for your sacrifice.”

Before sending students into the water, Wasson demonstrates everything from how to hold the knife blade to the easiest way to squat down. Then she watches, offering gentle corrections on removing seeds from the plant, and keeping the fragile stalks from bending.

Kara Smith, a designated “cutter”, carries a sharp, curved knife and squats to cut the bulrush stalks close to the bottom. It’s her first time harvesting, and she’s trying hard not to cut herself. But, she said, she’ll definitely be coming out again.

“We’re doing something to help preserve our culture and traditions,” said Smith, “Doing things that our ancestors did ... we experience blood memory. We have different emotions and different connections to those fibers that we may not have experienced personally but maybe our ancestors did.”

Back on shore, Wasson’s Kia Sportage is stuffed full with anaakanaashkoon that are laid flat and sorted by sizes; small, medium, large and extra large. Some are so long they brush against her dashboard.

Harvesting anashkanashk is just the first step. The time-intensive process includes sorting and drying the bulrushes until they are a nice golden-tan color, boiling and drying them again. It’s usually a few months until they’re ready to be woven into beautiful mats, bags and bundles.

She learned to weave from her non-Native mother, who she said was taught by a Kickapoo woman.

When Wasson was growing up, many in her community didn’t have access to traditional weaving knowledge, the result of decades of federal policies designed to assimilate Indigenous people.

And consequently, as a white woman, her mom would not have been a trusted source for those teachings at the time. So, she told Wasson that it was her duty to teach others in her community how to weave when they were ready to learn again.

Wasson said she was stubborn and uncooperative at first, but is incredibly grateful for the lessons and knowledge that she was given.

“She made me learn these old things.” Wasson said, “Then kind of like a time warp where I’m going further and further back in time, and finding the basics of what is truly truly important. I am forever, forever grateful for my mother, forcing me to learn these things, and in turn on teaching it to our communities.”

Her goal is to reintroduce the ways to any Indigenous person that is ready to learn from her. She’s well-known around the region, the country and even some parts of Canada.

One of them, Vincent Johnson, said he didn’t know much about weaving growing up. He speaks excitedly about learning from Wasson, but is hesitant about sharing too much without her permission.

“She was very knowledgeable. You can show her a pattern and she knew where that style of weave came from just by the pattern,” Johnson explained. “She’s also the one who taught me about different types of weaves, and what the different types of materials were used for and how they had patterns on their baskets for foods and such.”

The students’ teacher, Nokamis Paiz, applied for the grant to fund their travel. She hasn’t had the opportunity to learn to weave herself, yet, but plans to do so in the future saying it’s an important part of the culture.

“It’s something that I would like to revive in our community,” Nakomis explained, “Wasson’s words keep echoing through my mind about decolonizing our sacred spaces ... replacing the disposable culture that we have and to bring those traditions back as well as all the history and the language and the songs and the harvesting.”

Wasson almost exclusively teaches the tradition to other Indigenous people, though she tries to do one lecture a year that is open to non-Natives. She feels she must guard the weaving knowledge.

“That’s what my mother was trying to warn me about, to be careful because this knowledge, this gift, can be exploited, very easily,” she said.

Re-connection Wasson’s students often describe a sense of great peace and calmness when harvesting, processing and weaving bulrushes, as well as a re-connection with their ancestors and something greater than themselves.

“With our traditional culture, back before 1492 there was no instant gratification,” Wasson said.

Learning to harvest and weave bulrushes is part of what many Anishinaabe see as a need to decolonize their ceremonies, including the materials they use for them. Bulrush mats were a fairly common practice for covering a sweat lodge.

“I think that is probably one of the most exciting things because her vision is to cover lodges in what it was originally and not have tarps,” said Maani Tall Cloud, one of Wasson’s students. “To actually have the fibers that our culture is connected to. I find that really inspiring.”

She said she’s grateful to be able to fully appreciate her childhood memories, and regain a connection to the bulrush.

Matt Davis, one of the few that conducts sweat lodges for the Little Traverse Bay Bands of Odawa Indians, has long wanted to build a lodge that’s covered with bulrush mats to knee-height with a balsam fir or cedar boughs structure and a canvas finish.

He explains that while the sweat lodge ceremony isn’t what it used to be pre-contact, it can still have the same results. For him, decolonizing ceremonies is about community preparation, as well as where materials are sourced from.

Wasson’s overall goal for her students is that they re-connect with the natural world, and learn to turn to it for their physical and spiritual needs.

“For me, as the instructor, it’s the difference between giving someone a fish or teaching them to fish ... materials are not available in hobby stores, and stuff like that. You’d have to actually go to the woods.”

This reporting project was produced in partnership with the Mishigamiing Journalism Project, a grant-funded effort that grants journalism fellowships to emerging Indigenous journalists.

Hebrew name Yaakov, leapt from his body into the ethers of the great beyond on March 23, 2020. Please join Joel's daughter, Emily Magner, for a Celebration of Life from 2 to 4 p.m. on Sunday, Aug. 1, 2021 at the Historic Barns Park Pavilion, at the Grand Traverse Commons. You're invited to w…

TRAVERSE CITY [mdash] Orlin H. Benedict Jr., age 96, of Traverse City, passed away Friday, March 5, 2021 at the Grand Traverse Pavilions. He was born and raised in Milwaukee to the late Orlin and Lillian (Hanney) Benedict. He honorably served our country during WWII as a Lieutenant in the Ar…

80, of Traverse City, died July 12, 2021. He is survived by his wife, Claudia J. McBath; sons, George Michael (Kelly) McBath and Andrew Arthur (Samantha) McBath; grandchildren, Jack and Jacob; and sister, Kathy (Dave) Hentz. Memorial contributions may be made to his family to help with expen…