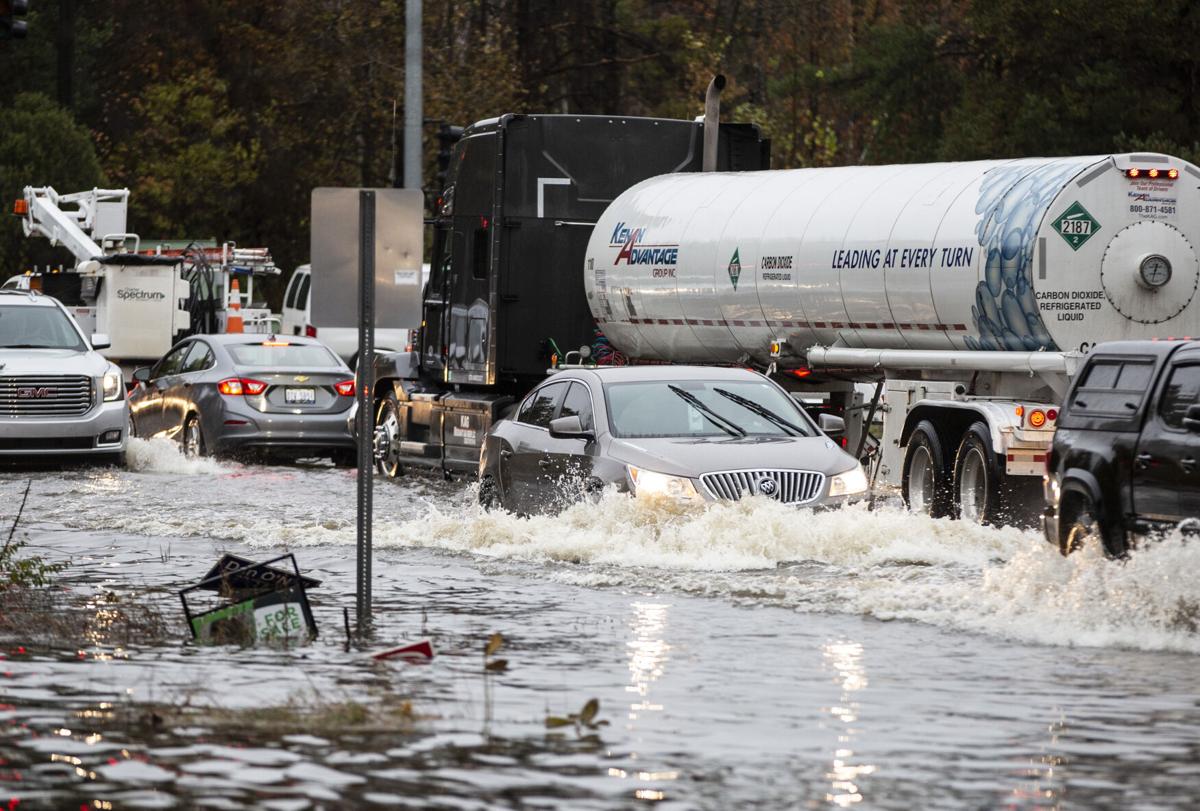 Motorists pass through a flooded section of South Airport Road in Traverse City on Friday. 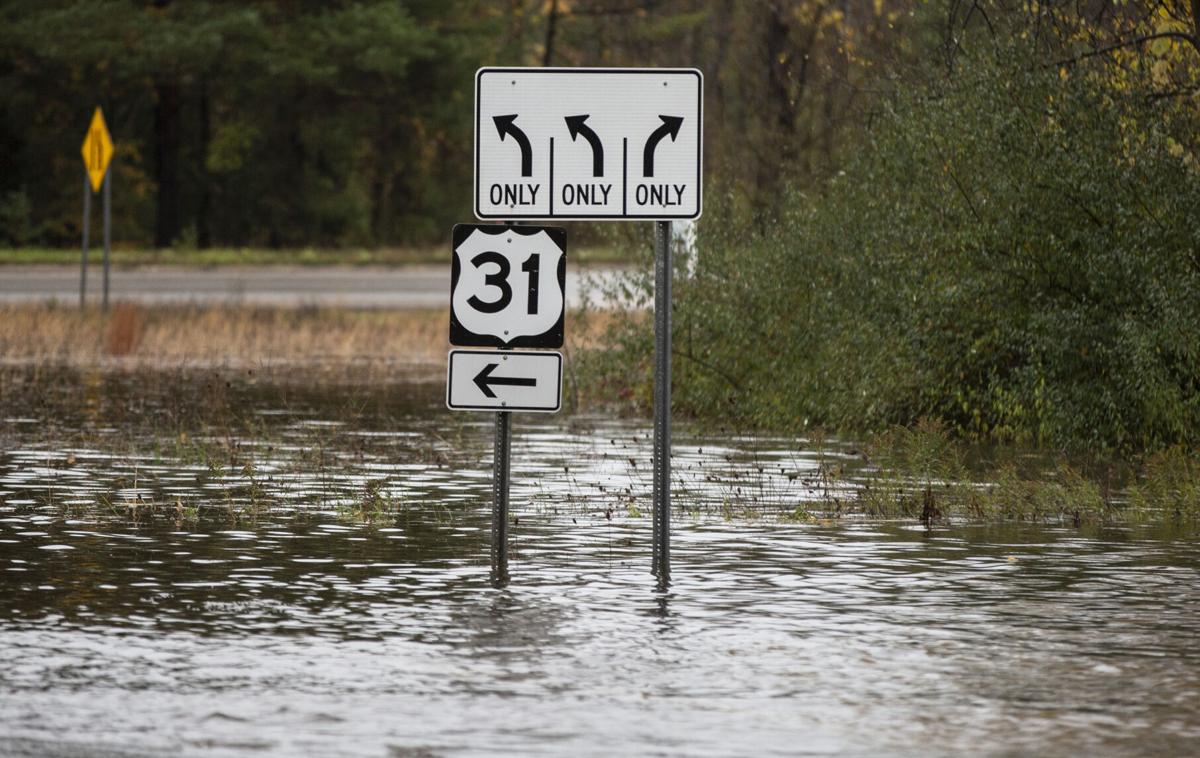 Flood water gathers under a sign near the intersection of South Airport Road and Three Mile Road in Traverse City on Friday. 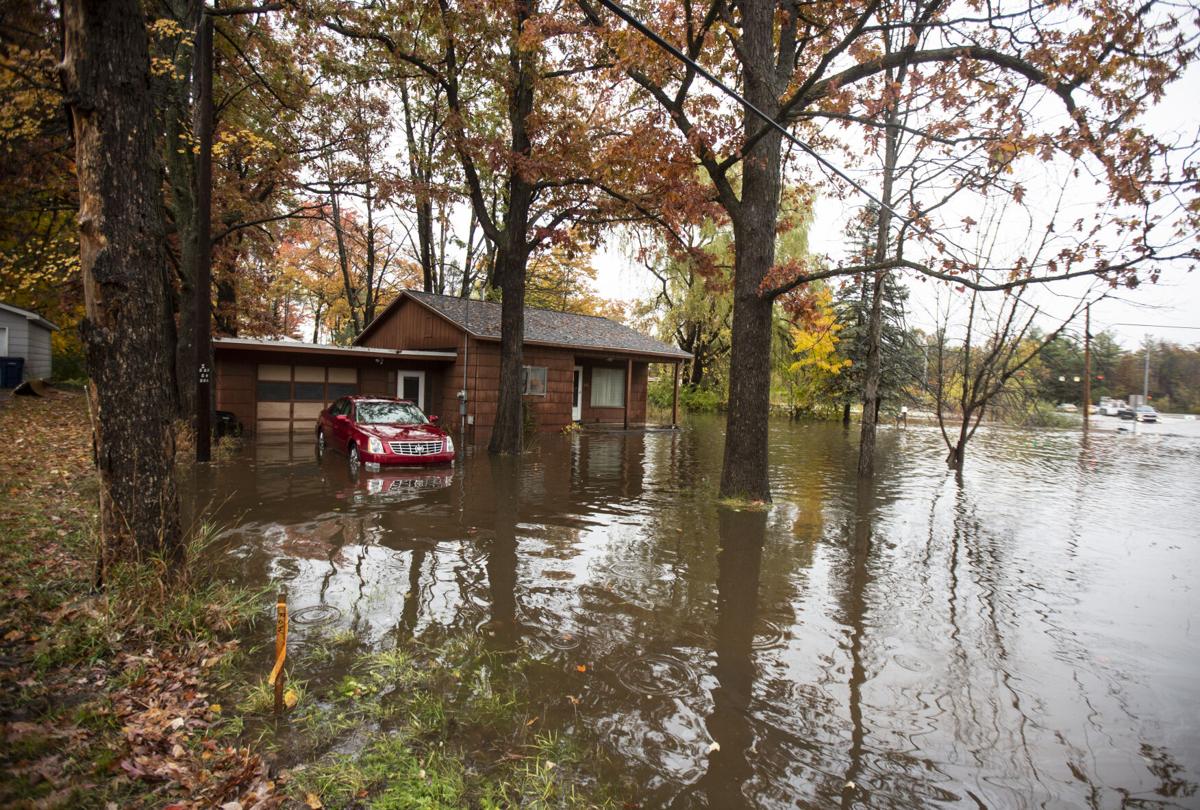 Flood water surrounds a house near the intersection of South Airport Road and Three Mile Road in Traverse City on Friday. 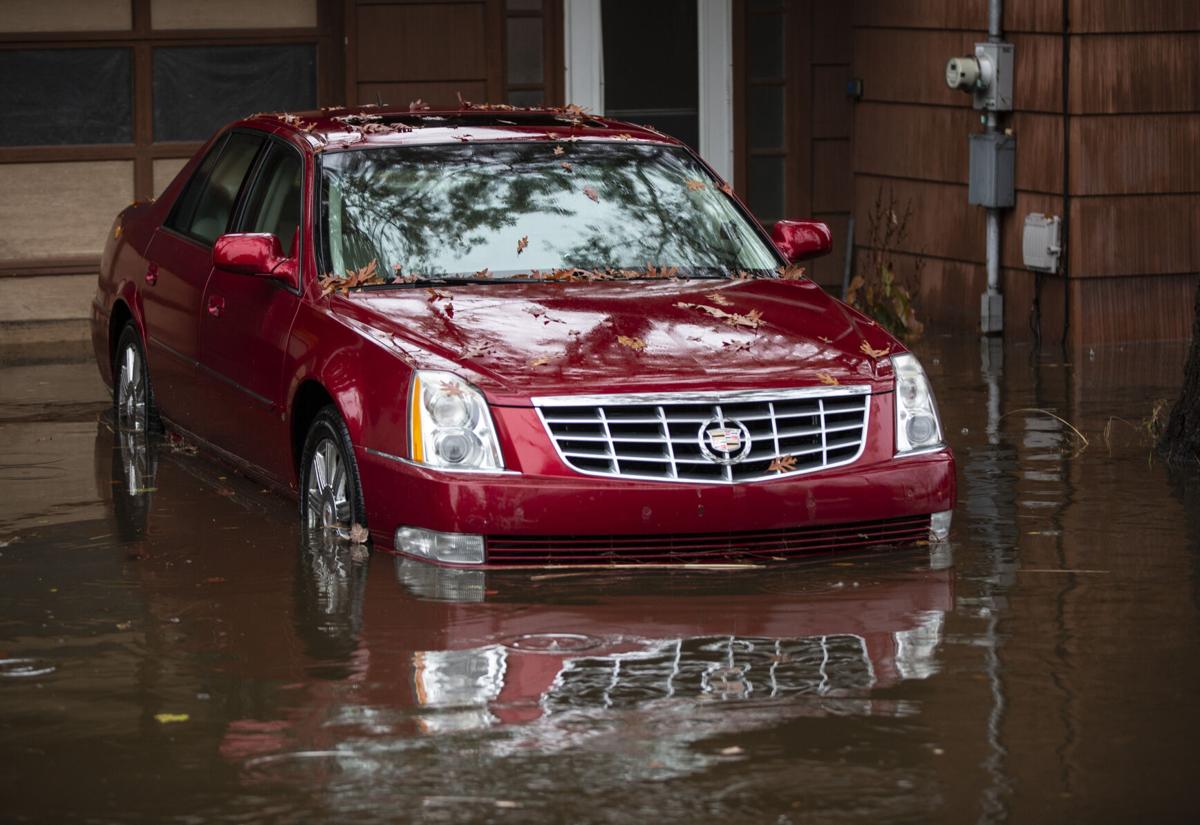 Flood water surrounds a car near the intersection of South Airport Road and Three Mile Road in Traverse City on Friday. 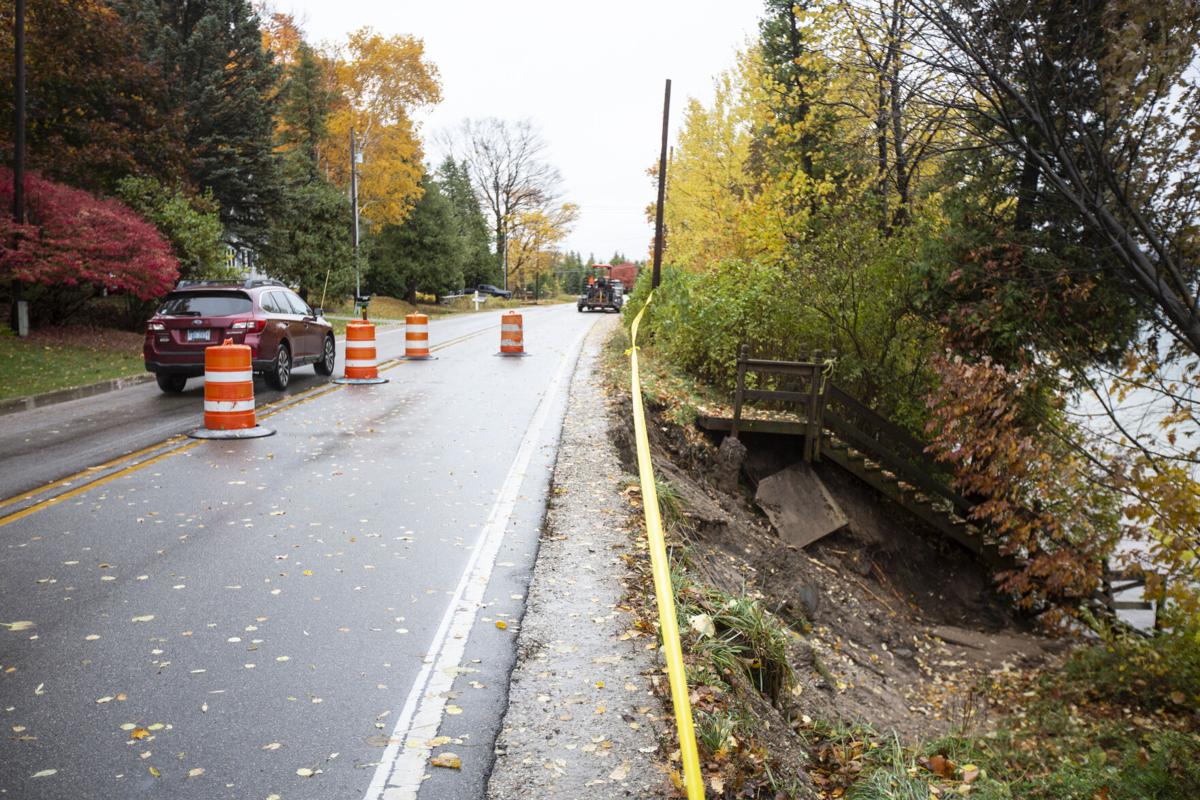 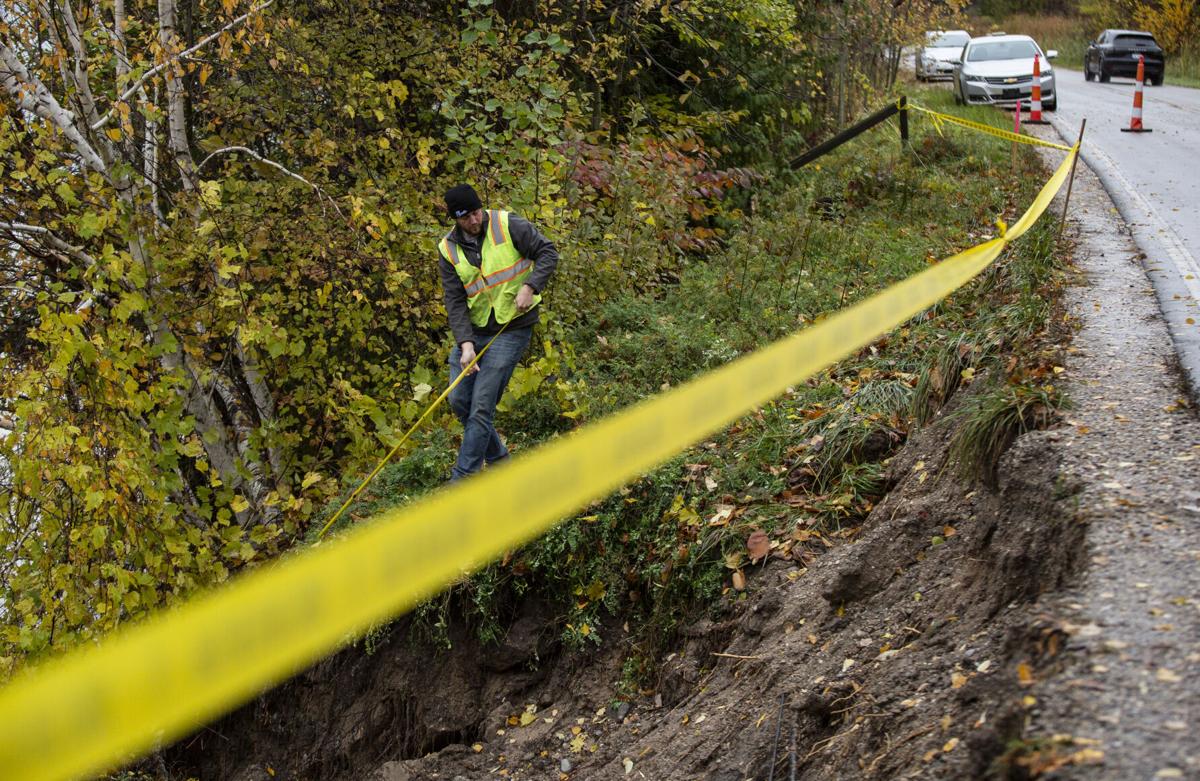 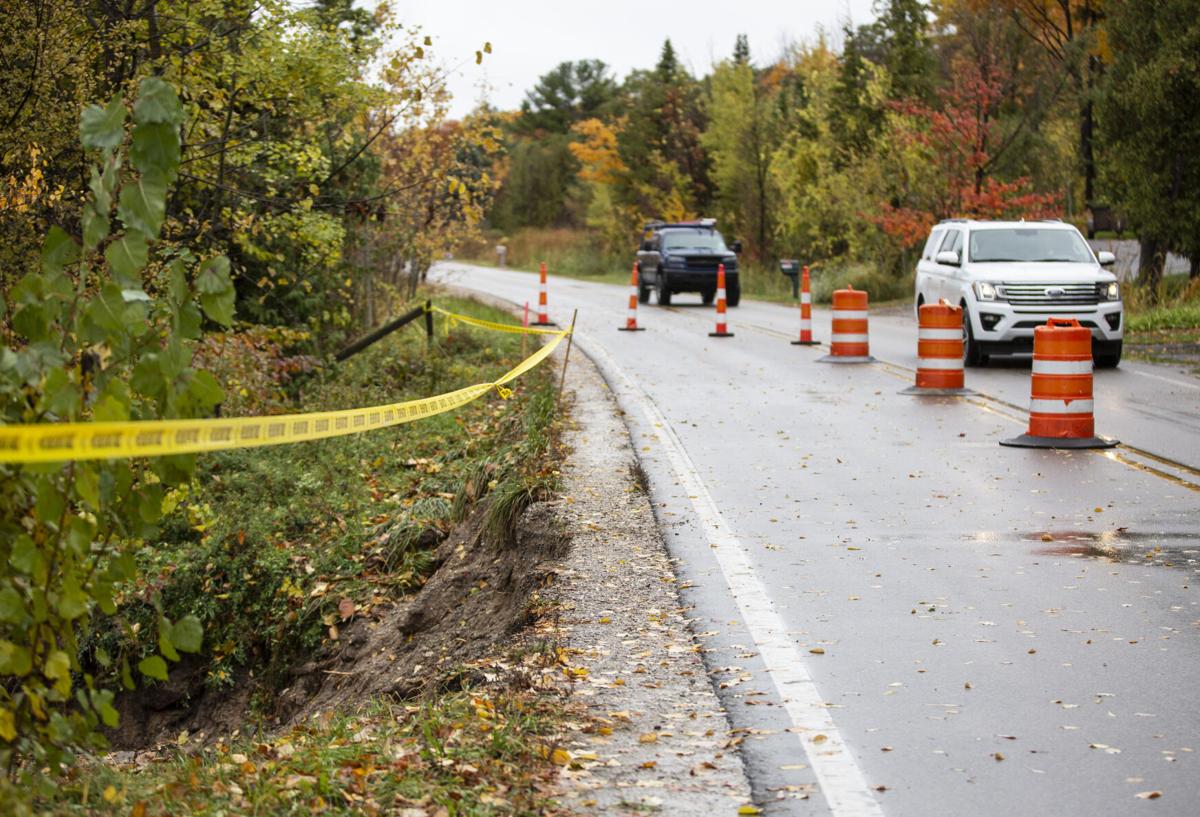 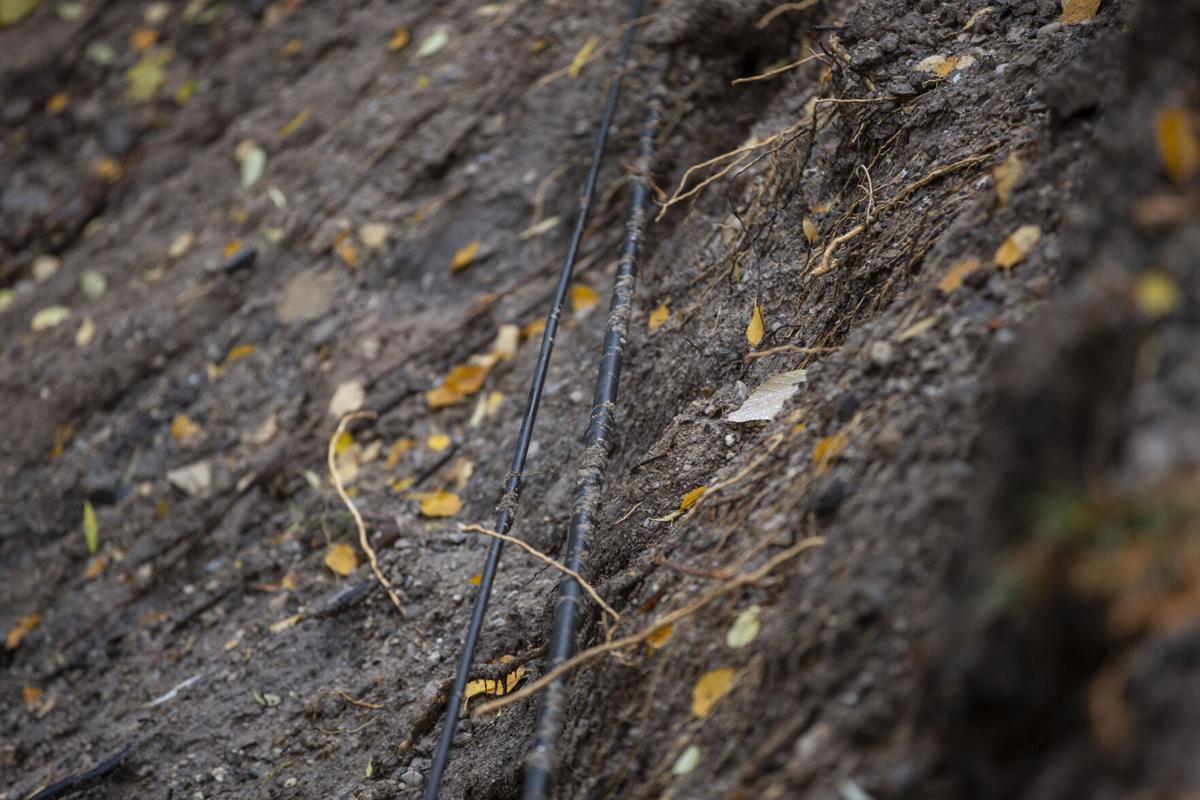 Motorists pass through a flooded section of South Airport Road in Traverse City on Friday.

Flood water gathers under a sign near the intersection of South Airport Road and Three Mile Road in Traverse City on Friday.

Flood water surrounds a house near the intersection of South Airport Road and Three Mile Road in Traverse City on Friday.

Flood water surrounds a car near the intersection of South Airport Road and Three Mile Road in Traverse City on Friday.

TRAVERSE CITY — A battering ram of system thunderstorms brought damage and flooding to Traverse City and much of northwest Lower Michigan.

The region is left soaked and soggy, with continued precipitation in the forecast through the weekend after a deluge soaked the region in the predawn hours Friday.

Federal weather forecasters reported a low-pressure system continued to bring drenching rain to portions of the region throughout the day Friday. Some areas were expected to receive in excess of 5 inches of rain between Thursday and Friday, officials said.

Flooding of low-lying areas occurred across the Traverse City region, including streams jumping their banks and streets brimming with water as storm drains became plugged with fallen autumn leaves.

Mitchell Creek swelled and flooded across Three Mile and South Airport roads in East Bay Township. Lautner and Bunker Hill roads were underwater in Acme Township, an intersection in between the East and West arms of Acme Creek. Kids Creek flooded 11th Street in Traverse City. There were more bursting rivers, still.

Even a near-shore portion of Peninsula Drive on Old Mission Peninsula washed away into Lake Michigan’s Grand Traverse Bay during the powerful overnight storms.

Experts said strong wind, buckets of rain and clashing air fronts created conditions ideal to wreak havoc on the northwest corner of the tip of the mitt.

Water levels on the Great Lakes and Michigan’s inland lakes have been brimming for more than a year. Groundwater levels have been high enough to inundate public and private infrastructure, flood storm sewers and muddle septic system functions.

That means when it rains — especially when it rains a lot in a short time period — all that water has nowhere to go. Between 3 and 5 inches of rain was expected to have fallen across the region by the end of Friday.

“There’s no easy solutions when we get these rainstorms we’ve just had,” said Mark Breederland, Great Lakes water levels expert and educator with Michigan Sea Grant in Traverse City.

He said oftentimes strong wind and atmospheric pressure changes will force shoreline water up onto land and into river outlets — called a seiche — in effect “pushing water up no matter if the water is coming down from rain.” That can lead to upstream flooding, Breederland said.

And plenty of rain was coming down thanks to competing air fronts, confirmed Andy Sullivan, meteorologist at the National Weather Service station in Gaylord.

“It was a battle zone between the warm, humid air from the south and the colder air from the north. They clashed and set up that storm pattern,” he said.

Storms kept forming along the battle lines running northeast from Frankfort to Drummond Island in the eastern Upper Peninsula. Sullivan called it “storm training,” a process by which storms churned out and then redeveloped over and over like a “real long train,” following along the line of contact between the warm and cold air fronts.

“The crazy thing about it was it was coming in waves, but it just kept coming,” he said.

Minervini said he spent the night raking leaves away from storm drains to keep the flooded Tributary AA from spilling into Building 50 at The Village at Grand Traverse Commons, as happened during a heavy downpour in late May.

Strategically placed sandbags also helped direct the runoff flow and other than a couple of leaky foundation spots, he said the historic buildings were unscathed.

Nearby Munson Medical Center, which also flooded in May, managed to escape harm in the Thursday-Friday storm, confirmed a hospital spokesman.

That wasn’t the case for a historic Traverse City school, though.

Central Grade School kept its doors closed Friday after heavy rain and a clogged pipe backed up the sewer system and caused a sewage overflow in the building Thursday evening.

The blockage still was being worked on as of Friday afternoon, but Traverse City Area Public Schools Superintendent John VanWagoner said Central still is set to reopen Monday for classes.

Art Krueger, Traverse City’s municipal utilities director, said the sewage backup into the school was less about the storm and more about a clog found in the district’s private service line that connects to the city’s sewer system. Contractors dug out roots and unmasked a new problem sent down the school’s toilets, he said.

“Now we have a new culprit in the sewers and it’s face masks, which shouldn’t be flushed,” Krueger said. “Don’t flush face masks. And don’t flush wipes, either.”

VanWagoner said the district’s other school buildings dodged any major flooding, save for some “pretty big puddles” in the parking lot at Traverse City High School. TC High sits on the north side of Three Mile Road just across from Cherry Capitol Airport’s east runway and just south of Parsons Road.

“As far as everything else, we’re doing OK,” VanWagoner said.

VanWagoner said he expected transportation issues later in the day with changing bus routes, notably those on Old Mission Peninsula. TCAPS officials received word from the road commission about what areas and roads bus drivers should avoid.

Krueger said the city “fortunately” didn’t have any sanitary sewer problems but street flooding was an issue thanks to the annual fall leaf pickup.

The first day city residents could put fallen leaves in the street was Thursday, and he said they did.

“We had knee-deep leaves plugging up the catch basins,” Krueger said.

And then there was the lightning.

Police and firefighters were first called to the scene after a report of smoke at the Reynolds Jonkhoff Funeral Home near Sixth and Pine streets, according to a Grand Traverse 911 post. The call came in at about 10 p.m. Thursday.

In a post, a funeral home official offered thanks to the several fire departments that worked to extinguish the small fire — Traverse City Fire Department, Grand Traverse Metro Fire and Elmwood Township Fire, as well as Traverse City Police Department and EMS workers.

The post states the small fire, suspected to be caused by a lightning strike, was quickly and carefully extinguished before major damage was done.

No one was injured, according to Traverse City Police Sgt. Matt Richmond, and investigators are confident the lightning strike caused the small fire.

Traverse City Fire Chief Jim Tuller said it was, indeed, a lightning strike to one of the funeral home’s spires during Thursday’s rolling storms that started the fire.

Fortunately, an employee was still inside and heard the strike.

As the smell of smoke grew stronger, they called 911, Tuller added.

“It was very, very fortunate — if no on was there, this could’ve been a very serious fire,” he said. “It’s a very historic building.”

The building suffered no significant damage, Tuller said, and the damage it does bear should prove an easy fix.

Continued precipitation is in the forecast for the region, according to the NWS.

A 40 percent chance of rain showers are expected throughout Saturday, then greater chances again Sunday afternoon into the evening. That rain can be expected to change into snowfall by 11 p.m. Sunday and continue into Monday, according to the NWS forecast.

But the precipitation in coming days should amount to much less than what fell during the Thursday-Friday storms, Sullivan said, though any additional precipitation exacerbates the soggy situation.

In fact, he said this year is setting up to be another of the wettest years in multiple places across northern Michigan. Such records were set last year for both Traverse City and Gaylord.

Traverse City beat the previous annual precipitation record by more than 13 inches and Gaylord did the same by more than 11 inches of rainfall, as previously reported by the Record-Eagle.

Breederland said not just rain and snow, but more shoreline erosion should be expected in coming weeks and winter months.

The combination of elevated water levels and windy, winter weather should be expected to bring continued erosion issues, he said.

“This is a battering with the high lake levels and we’re not even to November,” Breederland said, which he noted is widely considered the windiest month of the year in Michigan and its about a week away.

TRAVERSE CITY [mdash] Bonita "Bonnie" L. Smith, died Nov. 15, 2020, in Traverse City. She has lived the past 45 years in the Suttons Bay and Traverse City Area. Bonnie was born in Warsaw, Kentucky on Nov. 26, 1937, to the late Lillie Marshall Lillard and Noble Lillard. She is survived by her…