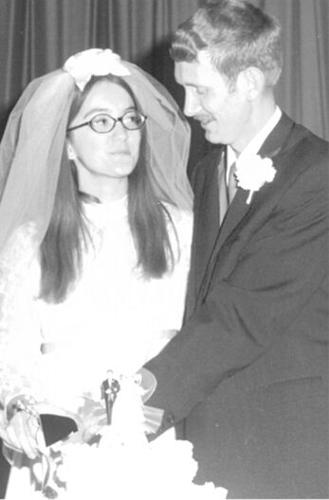 TRAVERSE CITY — Helen Jane Wolfe and Roger Scott Dewey were married on Dec. 27, 1970 at First Presbyterian Church in Harrisburg, Pennsylvania, while Roger was on Christmas leave from Navy flight training. The ceremony was officiated by the bride’s brother, the Rev. Dr. James Wolfe. Helen and Roger originally met on an outing club ski trip while both were attending Brown University.

Roger is a retired Navy Commander and helicopter pilot. Following his Navy career, he was a contractor for the U.S. Department of Energy in the Washington, DC area. Helen is a retired information services librarian from the Fairfax County, Virginia, Public Library system. They have two daughters, Margaret Dewey (Charles Denison) and Jocelyn Bothe (Mark Noonan).

Having lived in many different places and having seen a good chunk of the world, Helen and Roger felt that there was no better place to retire in 2004, than their cottage on the north shore of Crystal Lake, on a small portion of the Wolfe family enclave known as Pinecrest. A special bonus for two avid hockey fans is the short drive to Red Wings Training Camp and local high school hockey games in Traverse City. Because giving back to their community is important, Helen is currently treasurer of the board of trustees of Benzonia Public Library and Roger is board secretary of the Mills Community House Association.

Due to the Covid-19 pandemic, Roger and Helen have deferred the celebration of their 50th anniversary until later next summer, when their daughters and their partners can safely join them “Up North.”