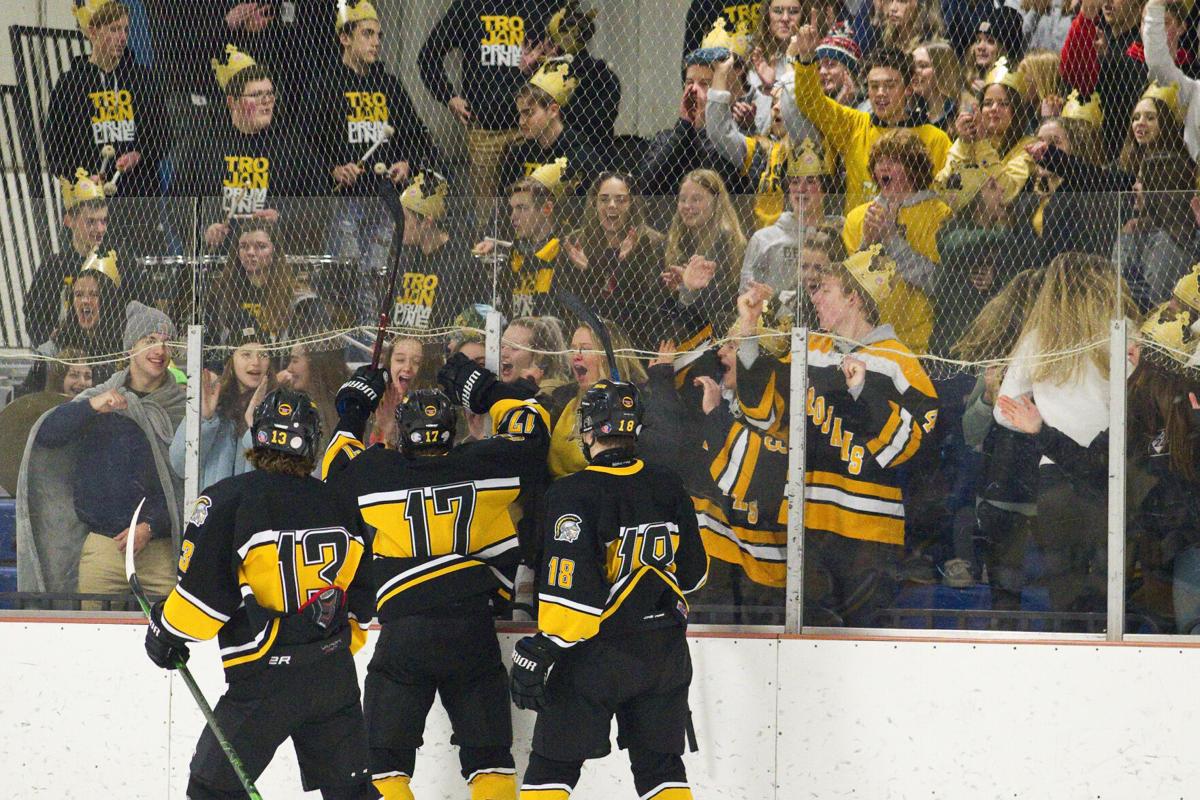 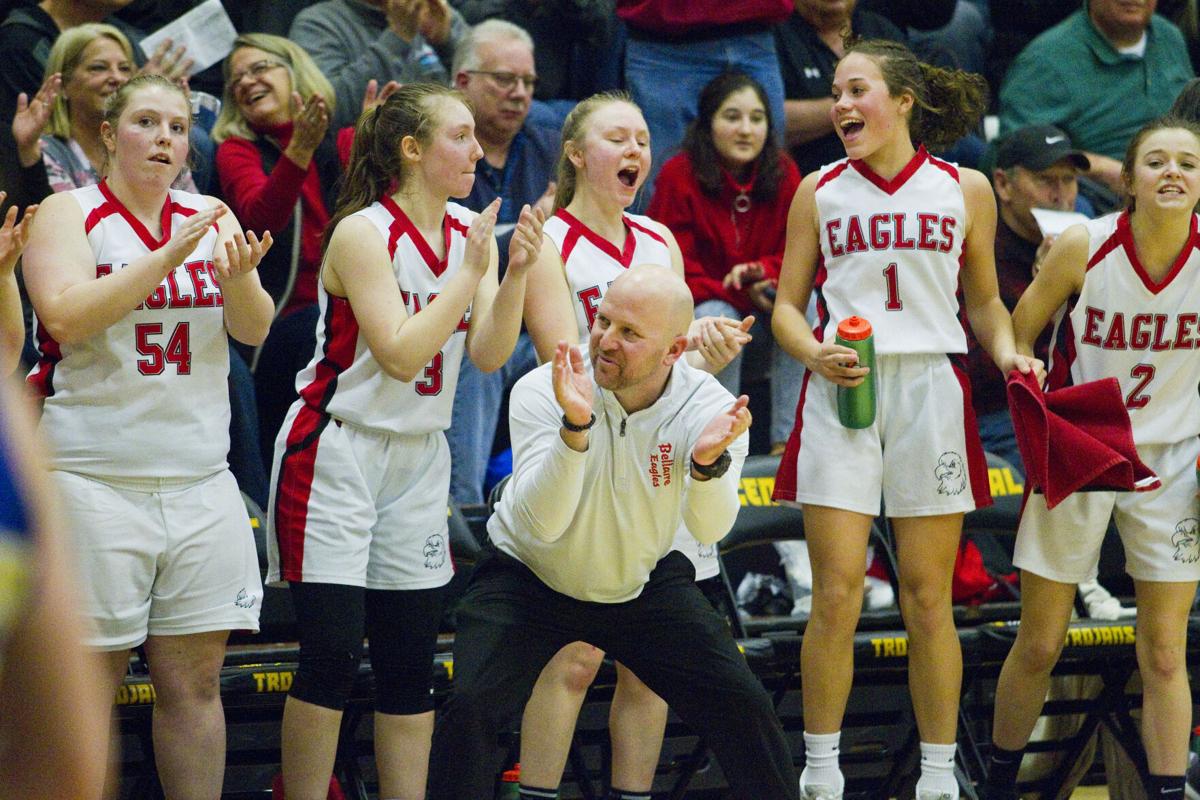 Bellaire coach Brad Fischer and his players celebrate a play against Onekama during a regional game in Traverse City. 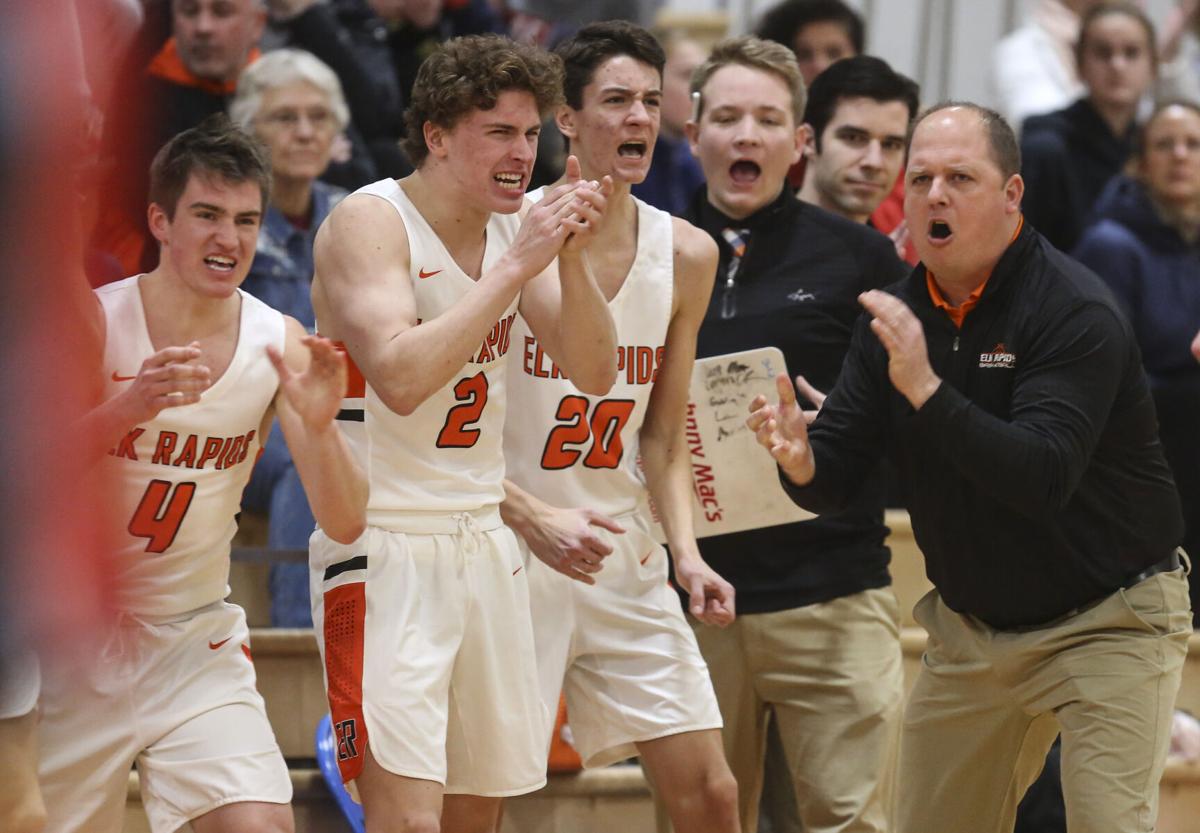 The Elk Rapids Elks cheer during a game against Boyne City at Elk Rapids High School.

Bellaire coach Brad Fischer and his players celebrate a play against Onekama during a regional game in Traverse City.

The Elk Rapids Elks cheer during a game against Boyne City at Elk Rapids High School.

Gov. Gretchen Whitmer confirmed that at a 1:30 p.m. press conference, allowing winter contact sports to resume as soon as Monday, exactly two weeks before the previous emergency order that put off many athletic events was set to expire.

“I kept my hopes up all day,” said Miller, a Traverse City St. Francis student and senior forward for the Bay Reps hockey team. “It’s my senior season, so I was really worried about not playing.”

Instead, the Reps have a home date Wednesday with Big Rapids.

Whitmer said the state “followed the science” and wasn’t influenced by an increasing outcry for high school sports to resume from athletes, coaches, parents, schools and administrators.

“Our numbers are now in a place where we can allow our kids to get back in the game with their coaches and teammates,” Whitmer said.

The return of basketball, hockey, wrestling and competitive cheer starts Monday, when teams can resume contact practices and even play games in basketball and hockey. Wrestling and cheer must wait until Feb. 12 for competition. Junior high athletics can also resume.

All indoor sports require masks. The only exceptions being boys swimming and wrestling, where it’s deemed almost impossible to mandate masks during competition. Instead, wrestlers must pass rapid testing the day of meets.

Athletes who don’t want to wear masks could have the option of taking COVID-19 antigen tests instead, but the details on that haven’t been released. It also wasn’t clear on whether that option could be taken individually, or if entire teams — including the opponent — would have to.

“Where masks are not compatible with the competition, (athletes) will be allowed to compete without masks if certain strict safety protocols are in place, including a testing regimen,” Whitmer said. “This is exciting news, and I’m so glad that our kids are going to be able to get back into playing the sports that they love.”

Michigan Department of Health and Human Services director Elizabeth Hertel added that spectators would likely be limited to two per participant.

“As a former college athlete myself, and the mother of three children who play sports, I know the important role that sports play in our family’s lives,” MDHHS chief medical executive Dr. Joneigh Khaldun said.

Even in situations when it’s not required, the strict testing protocol is recommended by MDHHS.

“We are counting on everyone to help make this work so we won’t eventually have to take steps backward again,” Hertel said.

Michigan High School Athletic Association executive director Mark Uyl said numerous items need to be further fleshed out between now at Monday, but that he was happy sports can begin anew. One of those issues is whether referees will be required to mask up.

“We saw the order today for the first time at 1:30, the actual order itself,” Uyl said. “We’re right now figuring out exactly where officials will fall in that order.”

Uyl said if a wrestler tests positive for COVID-19, that athlete would have to miss the event, and the team would have to contact trace to see if additional wrestlers would have to sit out as well.

Teams practiced for weeks in preparation for seasons that hung in the wind, and social distancing requirements barred contact at practices as well.

“What we’ve heard from all of our winter coaches is that our kids have never been in better condition, with all the conditioning that has gone on in the last three weeks,” Uyl said. “We’ve had a few wrestlers even joke that it’s felt like cross country practice the last three weeks as much as they’ve been running. So I don’t think our kids have ever been in better shape, which will allow us to make a very quick transition to contact competition and contact practices, right away next week.”

Let Them Play Michigan attorney Peter Ruddell of Honigman LLP issued a statement in response to Friday’s order saying, “We will need to review the details of the order issued today to determine the impact it will have on student athletes and their families across the state. After review, and if appropriate, we will take necessary action to dismiss the lawsuit.”

Just an hour before Whitmer’s press conference, the Michigan House of Representatives passed a resolution that urged Whitmer and her administration to lift the monthslong ban on organized sports across the state.

Sen. Dale Zorn, R-Ida, was the primary sponsor on a similar resolution that passed in the Senate with some bipartisan support.

“I believe, it’s my opinion, that the high school sports situation is the epitome of the unbalanced reaction the Governor has had,” O’Malley said. “There’s science and data that says these kids are doing exactly what you want, but you’re still saying they can’t participate.

“I think that the Governor is starting to feel the pressure, and its logical pressure.”

Andrew Rosenthal contributed to this report.

Inked Up: National Signing Day comes in different forms for class of 2021

TRAVERSE CITY — Skiers across the state enjoyed a unique opportunity since Jan. 15 — the abi…

The goal posts keep moving, but that won’t stop sports from plowing ahead.

Basketball is back Monday

BUCKLEY — Shelby Cade scored a dozen points in her first game on the boys varsity basketball team at Buckley, helping the Bears to a 77-63 hom…

86, of Fife Lake, died Tuesday, April 6, 2021. He is survived by his wife, Claudia (Rivas) Chalker; children, Ray, Teri Jean, Darryl, Dwain and Michelle; stepchildren, Brett and Brandy; and many, many grandchildren and great-grandchildren. He worked at and owned Auto Body Repair Shops. Priva…

91 of Traverse City passed away Feb. 5, 2021. The memorial mass will be held at 11 a.m. at St. Francis Catholic Church on Saturday, April 24, 2021. The family is being cared for by Reynolds Jonkhoff Funeral Home and Cremation Services..