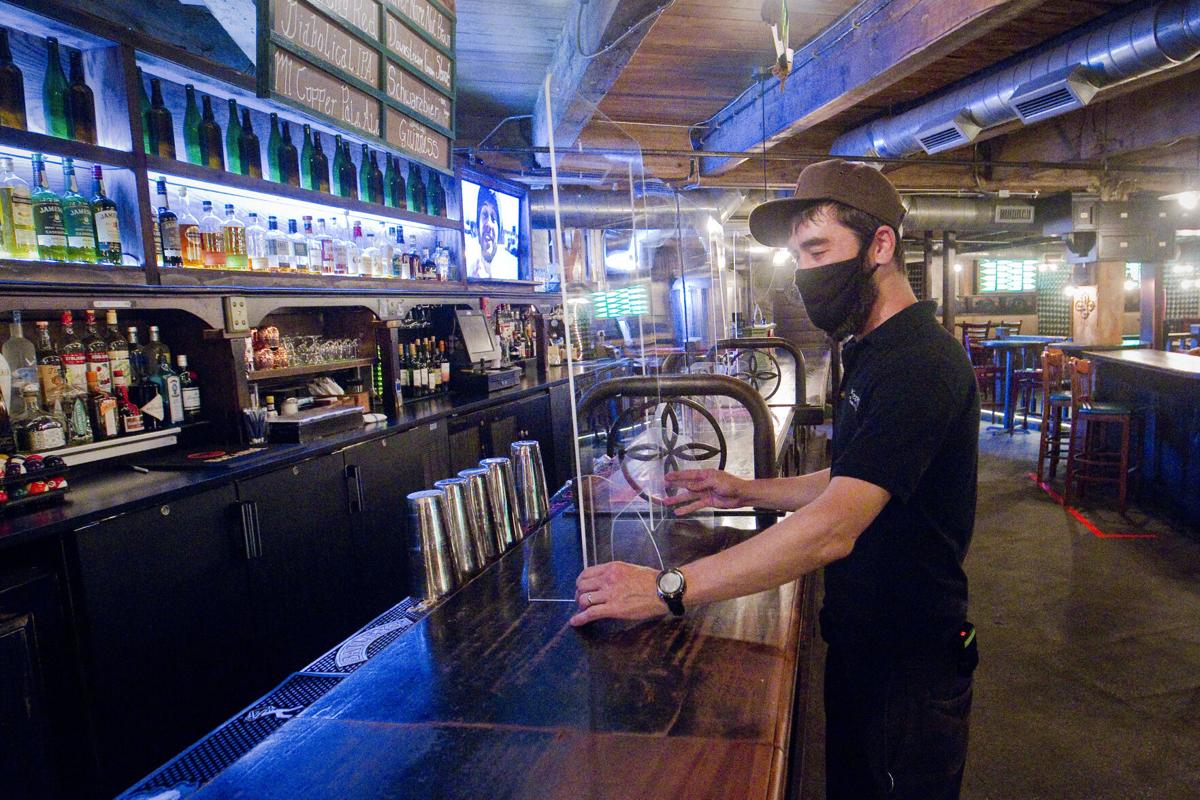 James Tulgetske sets up a plastic barrier on the bar on Thursday afternoon at Killkenny’s Irish Public House in Traverse City. 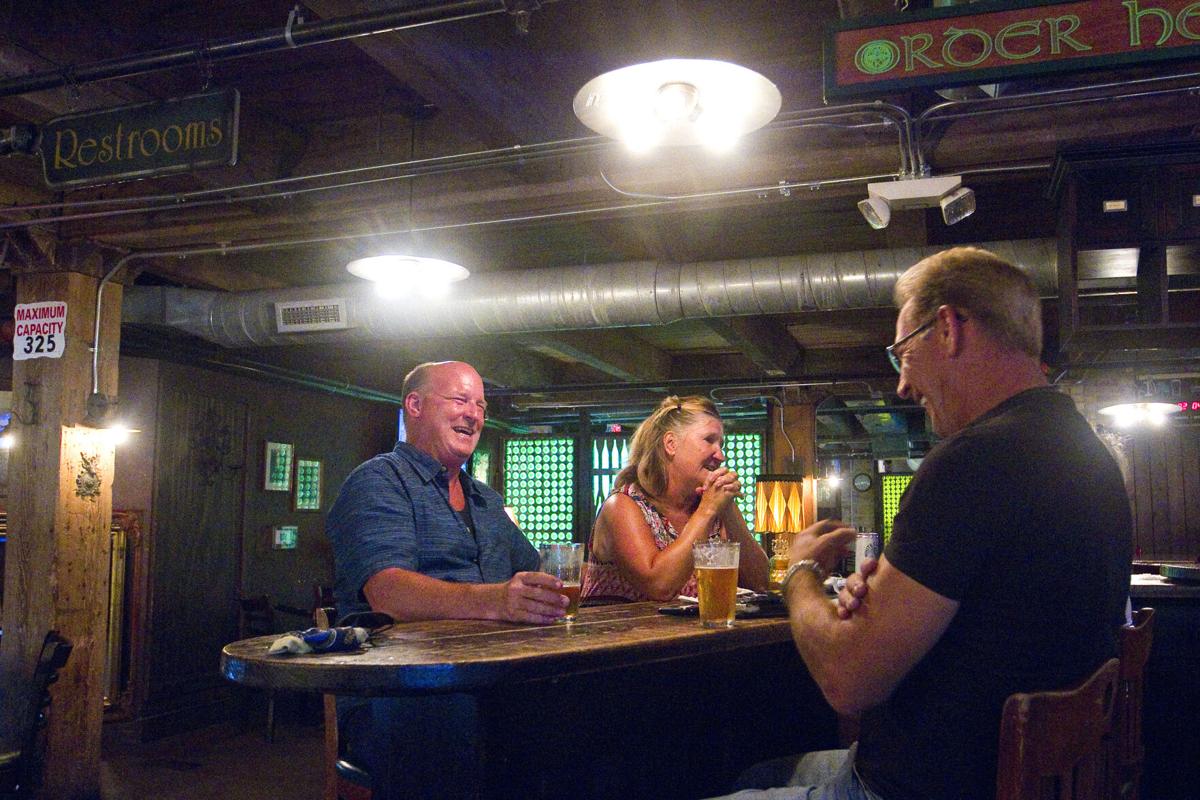 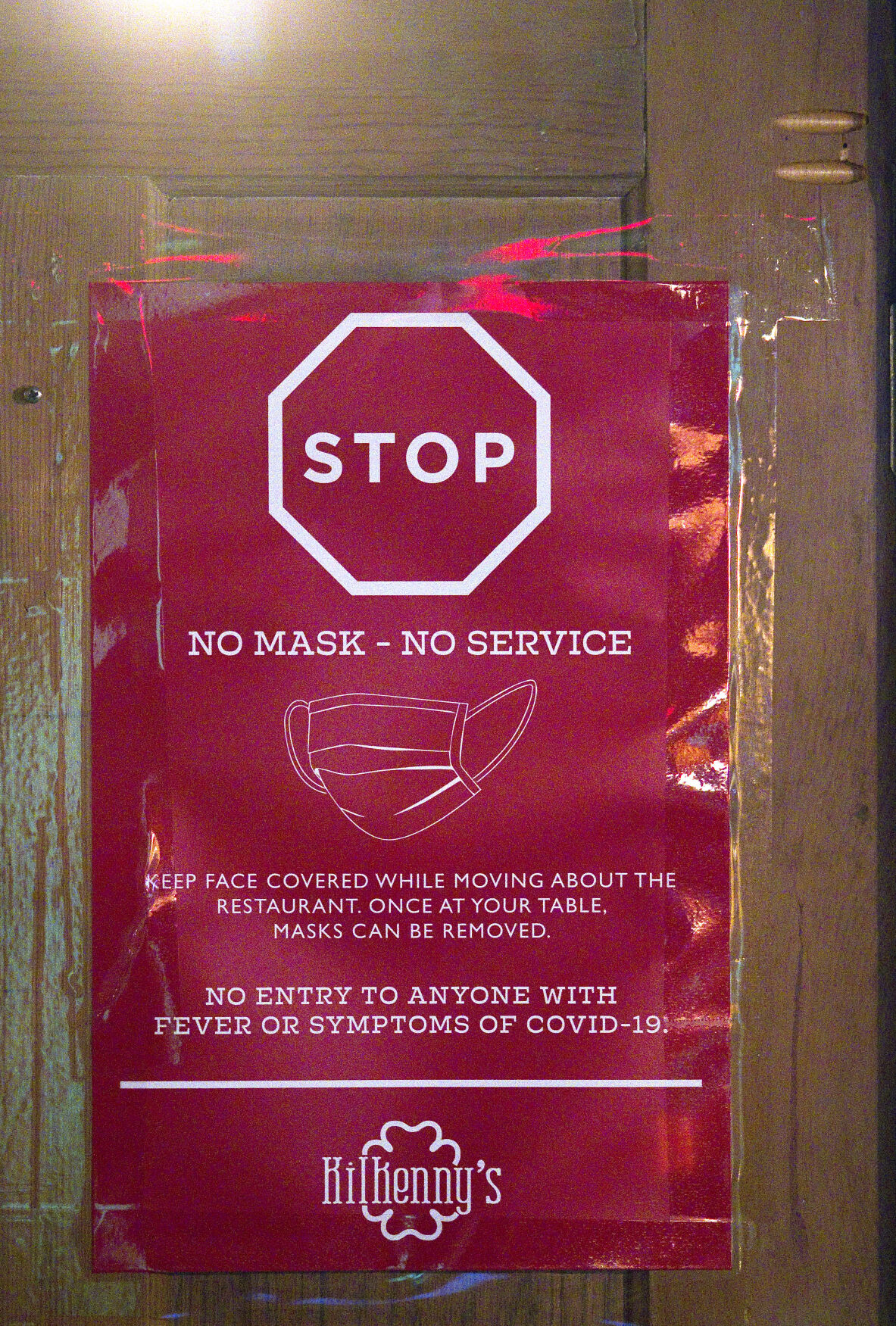 James Tulgetske sets up a plastic barrier on the bar on Thursday afternoon at Killkenny’s Irish Public House in Traverse City.

Kilkenny’s, Bootleggers & Dillingers and Low Bar all have said they will remain open after a pair of executive orders from Gov. Gretchen Whitmer announced Wednesday night closed indoor service at bars statewide that have less than 30 percent of sales in food.

Meanwhile, politicians criticized the order’s timing while COVID-19 infection data for the northern region has tended in the right direction.

“That does not mean that we do not hear and understand the worries of our community,” Lloyd said.

Attendance at Kilkenny’s will be limited to less than 50 percent and all guests will be required to remain seated in groups of 10 or fewer. Staff will now come to the tables to take orders, instead of guests lining up at the bar. Kilkenny’s will close at 1:00 a.m instead of 2:00 a.m.

Many, however, will not be as lucky.

“The longer this goes and everyday this goes on, more small businesses will not survive it,” said Rob Fowler, CEO of the Small Business Association of Michigan. “That’s what makes it such a difficult decision for the Governor, we get that, but that’s kind of the reality.”

Fowler said the SBAM has praised and echoed the stance taken by Traverse Connect, “stay safe to stay open.” Because of a high level of compliance, data shows people are not contracting COVID-19 in the workplace.

But he said Wednesday’s order sends a message.

“I think for all those who are anticipating that we’re going to continue to open things up one step at a time,” Fowler said. “A step back suggests we’re not on the path of reopening. We’re on the path of holding steady at best.”

Multiple Republican legislators criticized the timing behind the orders.

The final order was signed about 7 p.m. Wednesday. It became effective Friday, a month after the same actions were taken for the rest of the state and days after Whitmer held a press conference to discuss the state’s coronavirus response.

“Did she not have any inkling that this was going to happen 24 hours later when she held that press conference?” asked Republican State Rep. Jack O’Malley of Michigan’s 101st District.

O’Malley said he was traveling back from Lansing taking calls from constituents when he first found out about the order’s expected signing. When he found out through a text message, business owners, like many in Traverse City, were concerned about the order’s scope and reach.

“Her orders are so broad and so sweeping as opposed to surgical and focused,” O’Malley said. “Let’s say there was a issue in one area, maybe you focus on that area. Why bring in an area that’s 150 miles away, but it’s still in your region. It makes no sense.”

Rep. Jack Bergman of Michigan’s First Congressional District called Wednesday’s orders a “a true slap in the face” to small business owners in Regions 6 and 8 in a Twitter thread Thursday.

“The majority of employers in Northern Michigan and the U.P. need to thrive over the next few months to stay afloat this winter,” Bergman wrote. “These are businesses and workers who’ve gone the extra mile to comply with the state’s safety guidelines and stop the spread of the coronavirus.”

Bergman continued by saying his office was not informed of the decision before it was signed late Wednesday evening. He called the decision “baseless,” sharing a photo of the state’s data dashboard indicating no patients who tested positive for COVID-19 were hospitalized in the Upper Peninsula.

In Munson Hospitals, there are two.

“There is no data presented that leads one to make the decision to start closing northern Michigan and the U.P. while opening casinos in Detroit,” Bergman wrote.

O’Malley concurred that it was a confusing action to take at the same time.

“How can you open up the casinos and then back off because there were 43 cases off a sandbar on a lake in northern Michigan?” O’Malley said.

Hours after the restrictions go into effect, Whitmer is set to speak Friday at Camp Grayling, the Record-Eagle learned.

The governor is speaking at the National Guard’s traditional Pass in Review ceremony, a long-standing military tradition that began as a way for a newly assigned commander to inspect troops. It’s now a way to recognize accomplishments, outstanding performers and those who were killed in the line of duty.

85, of Grawn, passed away on Sunday, Jan. 17, 2021. A full obituary will appear in tomorrow's edition of the Record Eagle. A celebration of life will be held in the spring. Arrangements are taken care of by Kalkaska Funeral Home.