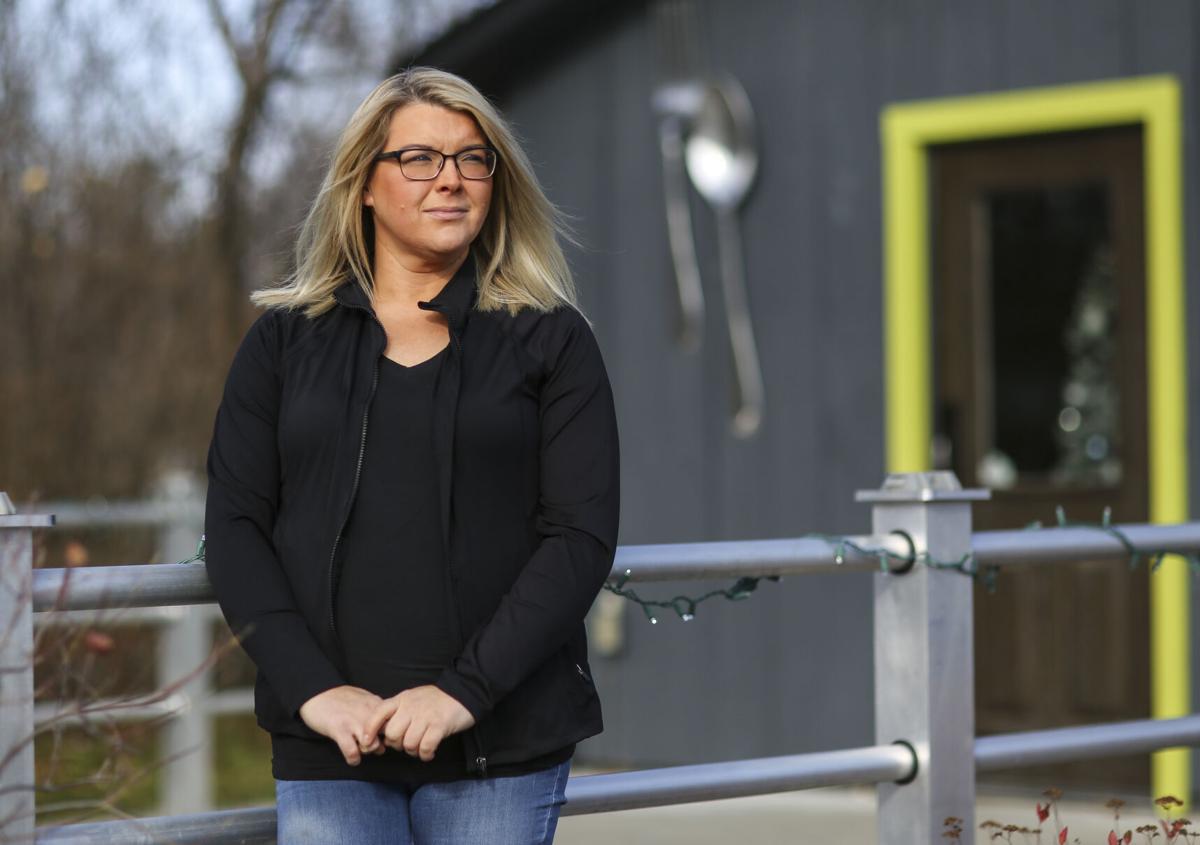 Ashley VanOrman: “How many service workers are going to be out of a job right before Christmas? They say three weeks isn’t a big deal, but you go three weeks without getting paid.” 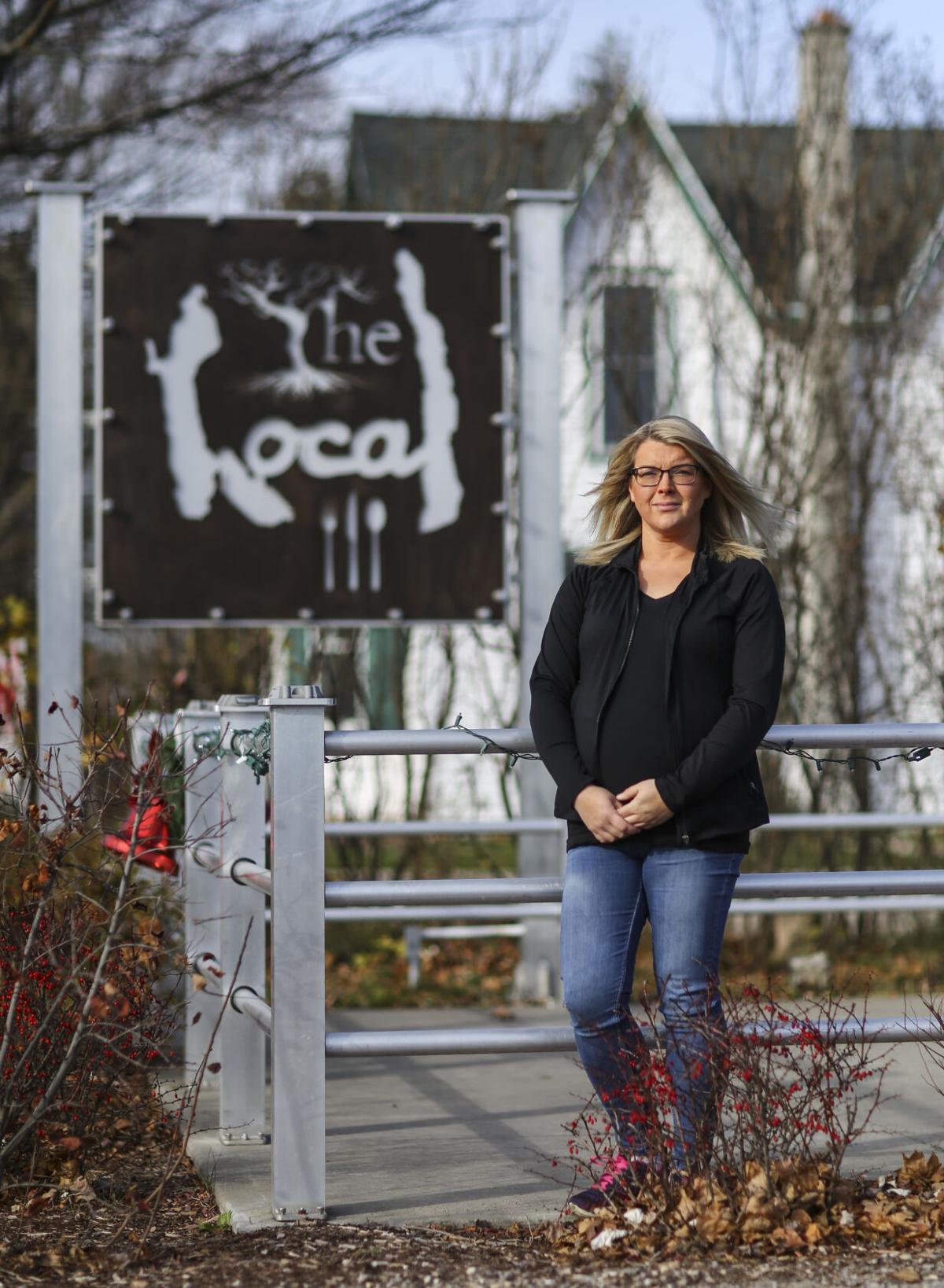 Ashley VanOrman at The Local in Elk Rapids on Wednesday.

Ashley VanOrman: “How many service workers are going to be out of a job right before Christmas? They say three weeks isn’t a big deal, but you go three weeks without getting paid.”

Ashley VanOrman at The Local in Elk Rapids on Wednesday.

ELK RAPIDS — When she left her job Tuesday afternoon, Ashley VanOrman departed with a few certainties.

The 34-year-old knew she didn’t have COVID-19. She knew she would return safely to her Rapid City home to her 10-year-old daughter. She also knew there’s another girl on the way, due on Valentine’s Day, with her boyfriend of two years.

But right now, the unknowns are weighing heavy on the waitress. The Local restaurant in Elk Rapids, where VanOrman has worked for nearly six years, dropped sit-down service as of Wednesday in response to a new state emergency order.

Restaurant owner and longtime VanOrman friend Jamie Wentworth said Tuesday she would keep the breakfast-and-lunch restaurant open — for carry-out only — “until the food runs out.” Supplies ran out Friday.

The Michigan Department of Health and Human Services on Nov. 15 announced a fresh set of restrictions designed to slow the spread of coronavirus. The rules began Wednesday and are set to last three weeks.

Restaurants cannot offer indoor dining, the emergency order states. Face masks must be worn except when eating or drinking while seated.

“Outdoor dining at a food service establishment is permitted,” Lynn Sutfin of the MDHHS told the Record-Eagle via email. “Additionally, a single household may dine inside an igloo, hut, or other small, enclosed space without violating the order, provided that employees enter fleetingly or not at all.”

The Local in Elk Rapids is one of the restaurants that simply closed instead of doing carry-out or delivery, forcing VanOrman and many other service workers to file for unemployment again. Round’s Restaurant in Traverse City also closed, as of Wednesday, for three weeks.

Unemployment benefits will be smaller this time

Unlike this spring, there is no federal $600 weekly Pandemic Unemployment Assistance waiting for employees. Other measures that earlier this year protected renters from eviction and homeowners against foreclosure also are not in place.

“I really don’t know what I’m going to do, to be honest, for that three-week period,” VanOrman said. “And hopefully it’s only going to be three weeks. Hopefully I can qualify for the whole $362, but even then I typically make double or triple that working at The Local every week.”

Another thing VanOrman knows is: She’s not alone. The timing of the closure and its effect on the service industry is stinging a wide swath of workers.

“There isn’t a whole lot up here,” VanOrman said. “How many service workers are going to be out of a job right before Christmas? They say three weeks isn’t a big deal, but you go three weeks without getting paid.

“All those people are going to be out on their (own) to figure it out, hoping they get that last little bit from unemployment.”

Effects will linger beyond three weeks

Making matters worse for VanOrman, The Local won’t reopen again in three weeks. The restaurant typically closes for the season just before Christmas, so VanOrman’s layoff will last an additional three weeks.

“I don’t see how I would make more money than I would spend,” Wentworth said of her decision to keep the restaurant closed until April.

One solution for employees would be to find another job until closed restaurants reopen. That may not work for VanOrman with a child due early in 2021.

“Nobody wants to hire a girl that is going to have to take maternity leave soon,” she said. “I’m not sure what I’m going to do.”

VanOrman’s boyfriend is out of work and is on disability from a dirt bike accident, so their holiday season is even more uncertain.

“Those all hit at a really great time,” said VanOrman, sarcasm dripping from her words.

Takeout only doesn’t cut it for some

While the tale of VanOrman and The Local may be extreme, it isn’t an isolated one.

Patty Cakes Restaurant & Bakery in Buckley is another Michigan restaurant that rode a rough sea in 2020.

“I closed down for two and a half months,” said Kellogg.

Wentworth made a similar decision with The Local. The Elk Rapids establishment remained closed until May 1.

“This just seemed up in the air,” Wentworth said. “We don’t make a lot of money in April anyway.”

When Gov. Whitmer later relaxed rules in northern Michigan, Kellogg couldn’t reopen her restaurant for another week because it took that long to order and take delivery of supplies. In the meantime, her normal crew of eight to 12 employees were out of work.

That crew included cook Emily Hill, 23, who — like many Michiganders — had trouble navigating the state’s suddenly overloaded unemployment insurance system.

“For the most part, it was pretty difficult,” Hill said, “because for the first month and a half, my account was on hold, and it was almost impossible to get through.”

She and her husband had to stretch their household budget to scrape by.

“For a month and a half, we were living off just his income, which was very difficult,” said Hill. “Once (unemployment payments) finally came in, it did help.”

It allowed the couple to “catch up on the bills that we either couldn’t pay or were behind on,” she said.

The state hopes this week’s expected surge in unemployment applications will result in fewer problems for filers than in the spring.

“The UIA has increased capacity, improved workflow, and other internal systems, and reduced red tape to meet the unprecedented level of claims that have been filed since the pandemic began,” Unemployment Insurance Agency Acting Director Liza Estlund Olson said in a release this week. “These efforts have positioned the agency to better deal with large fluctuations of demand if necessary.”

But after filing for unemployment for the first time ever in the spring, VanOrman is hoping it’s smoother the second time around. She said she already was back to work this spring before all expected unemployment payments landed in her bank account.

“I’m nervous to have to do it again,” said VanOrman, who admitted that unemployment, plus the $600 Pandemic Unemployment Assistance, allowed her to “pay my bills and buy groceries.”

Adjusting to the new reality

“I’ve had, actually, a pretty good summer. I created outside dining, with picnic tables and everything. So it actually worked out pretty good for us,” she said. “When I reopened, I knew I was going to have to have more hours, because I could only have half as much seating.”

Patty Cakes is on an even keel financially, she said. But this week’s new three-week closure delivered a fresh wave of uncertainty.

“Since we reopened, we do do quite a bit of carryout,” Kellogg said. “I’m hoping that it just keeps rolling in and gets better.”

Patty Cakes employee Hill doesn’t know if business at the restaurant will continue strong enough to keep her paychecks coming the next three weeks — or if she will again be laid off.

“It’s questionable,” she said. “We’re going to be doing carryout only, so depending on how that goes, it’ll really make a difference.”

If a second layoff does come for Hill, it’ll be tougher this time around. That $600 in federal money is no longer available.

“I was making the $362 plus that ($600),” she said, “so that was pretty comparable to what I was already bringing home. Whereas now it would be more difficult because it would be less. I mean, it would still help compared to no money, but ...”

Round’s restaurant in Traverse City is taking the opposite tack from Patty Cakes.

“We’re shutting down completely,” said Manager Kevin Whiting. “We tried running to-go last time, and we didn’t bring in enough business to cover the cost of the labor. So we are going to be shutting down for three weeks. So everybody’s getting a temporary layoff again.”

The restaurant has 18 workers who will go without paychecks for at least the next three weeks.

Employee Leighanna Whiting, Kevin Whiting’s niece, emerged from the pandemic’s first round of restrictions with household budget relatively intact. But she isn’t sure what the next three weeks will bring.

“During the last shutdown, I had another (second) job,” said Leighanna Whiting. “Luckily, I was able to work through it the last time.”

But now she has just one full-time job — at Round’s.

“This time it’s a little different. I’ll have to be looking into that unemployment,” she said.

Many food service owners and employees are hoping for a return to normal come Dec. 3. Not everyone is confident that will happen on schedule.

“I really don’t know what I’m going to do, to be honest, for that three-week period.” Ashley VanOrman