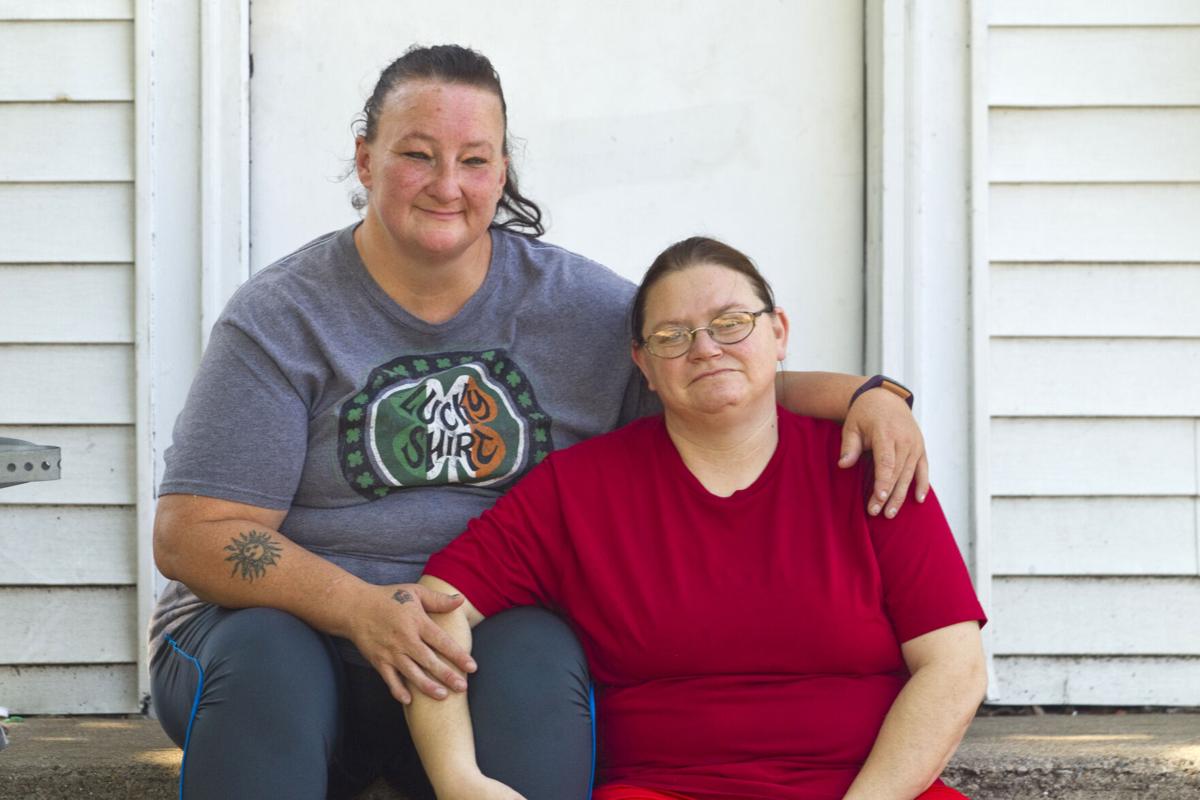 Tanya Lucha, left, and Bobbie Temple sit outside their home in Cadillac, where they have lived for more than a year. 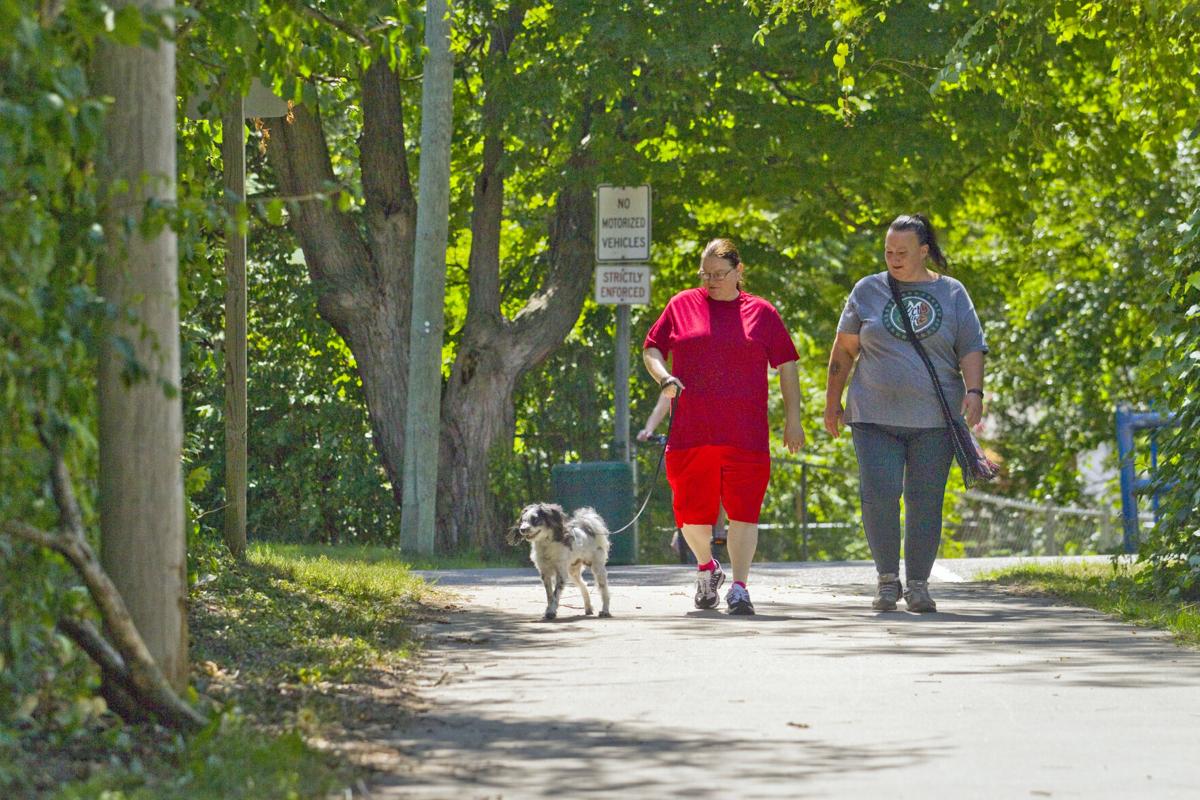 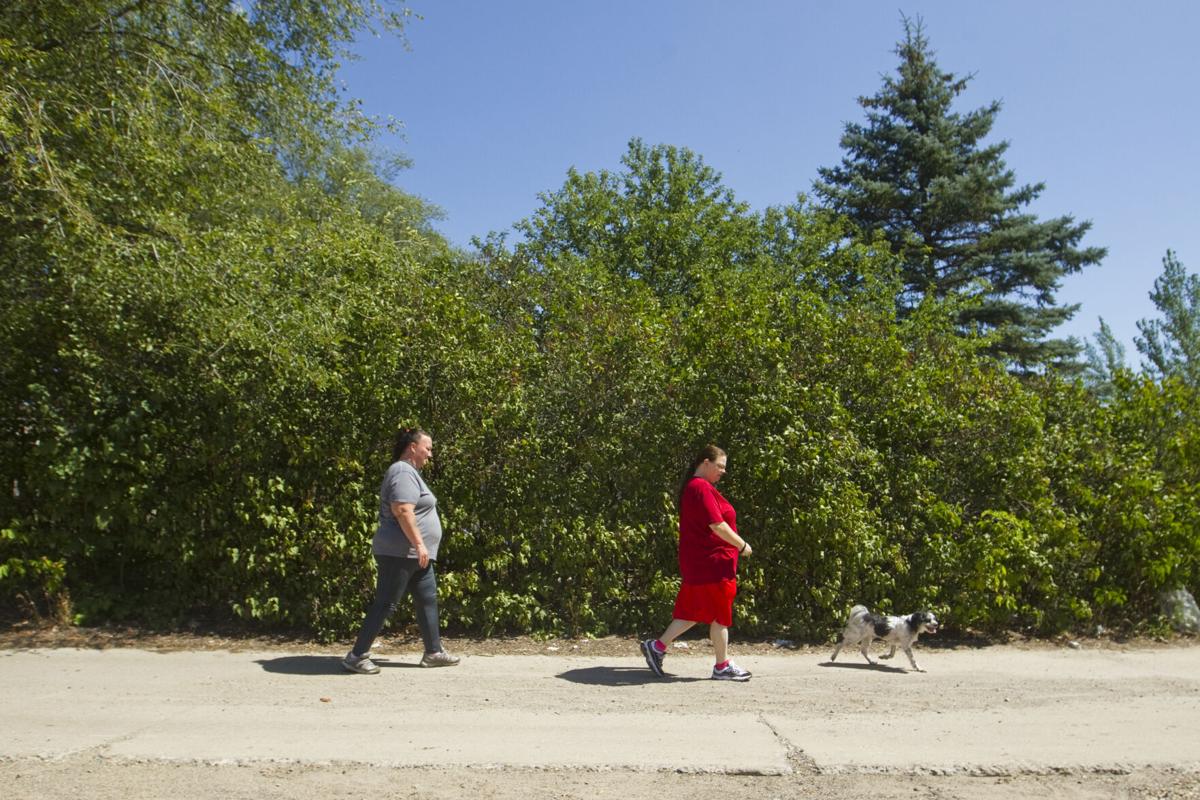 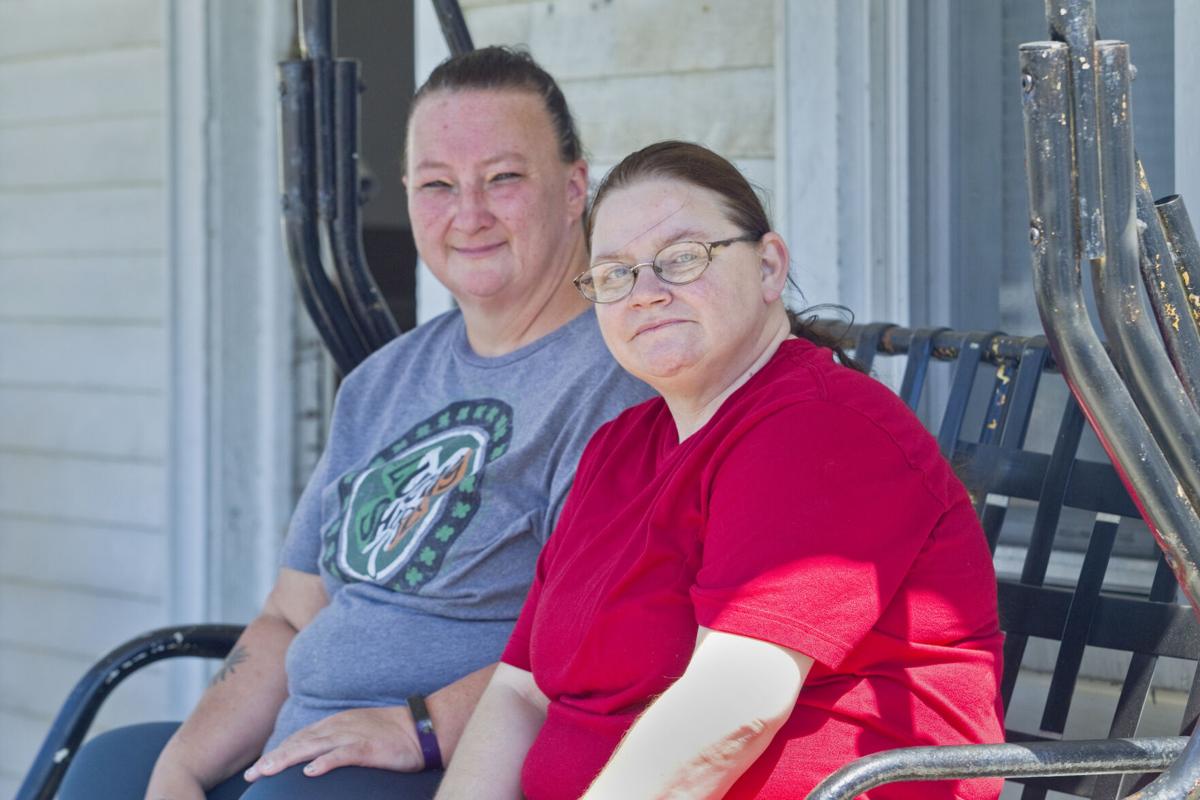 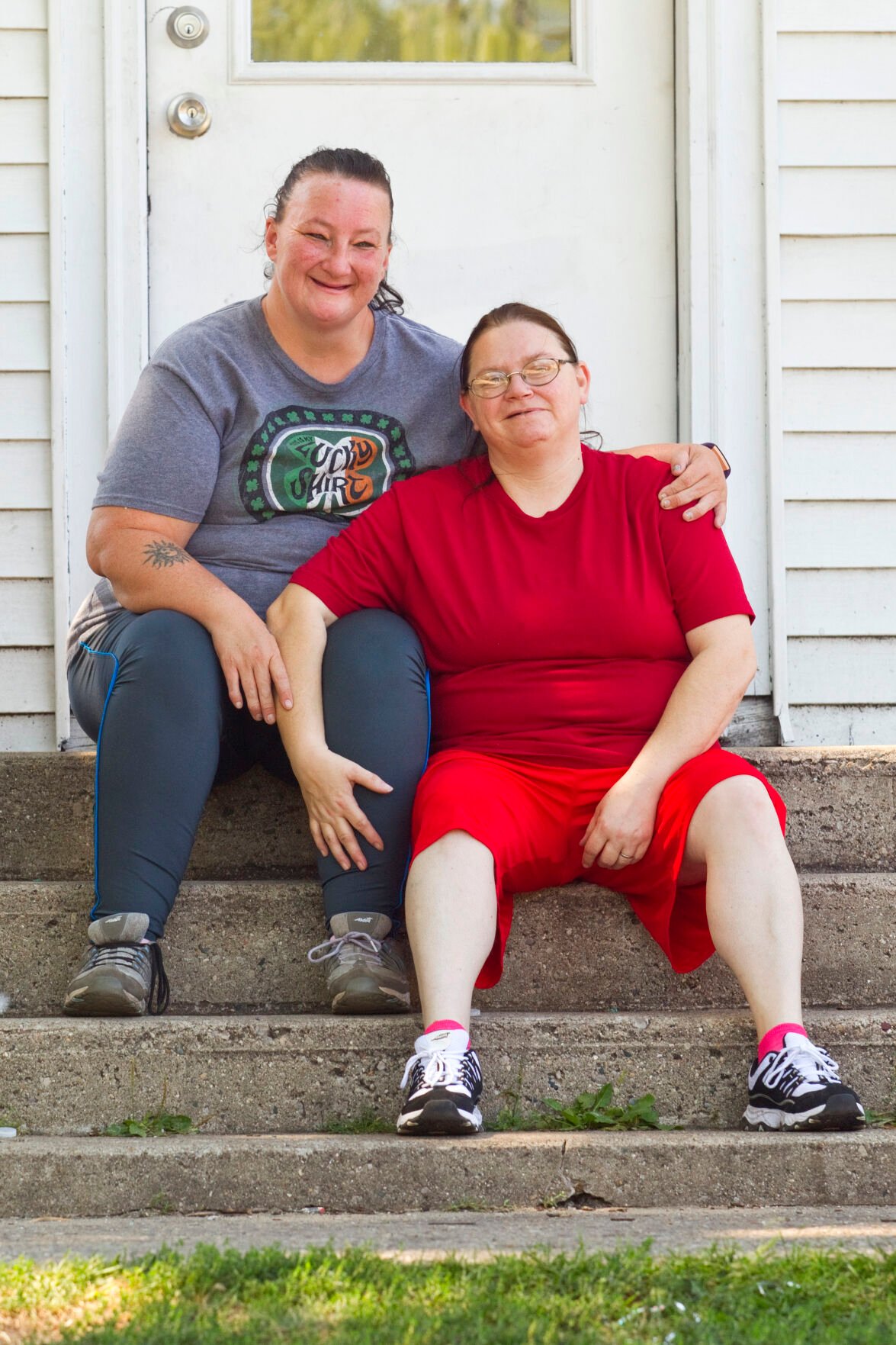 Tanya Lucha, left, and Bobbie Temple sit outside their home in Cadillac, where they have lived for more than a year.

If the lurking tendrils of a panic attack hadn’t furled around the restless 46-year-old, her girlfriend’s late-night weeping made sleep impossible.

Lucha’s nightmares weren’t the type to fade at sunrise — they grew in the daylight.

“I couldn’t eat, couldn’t sleep. With my health issues, I was just getting so stressed,” said Lucha, who receives $700 each month from Social Security Disability. “I was just afraid of being homeless again.”

She’s not the only one tossing and turning at night.

Lucha and her girlfriend of six years, Bobbie Temple, joined thousands of Michiganders who face late payment notices and snowballing back-rent since March, when the COVID-19 pandemic and an ensuing recession swept the nation.

Those anxieties worsened as layoffs, cutbacks and uncertainty collided last month with an end to federally boosted unemployment payouts and the expiration of state and federal moratoriums on eviction proceedings.

As more people find themselves in need, their safety nets are falling.

Michigan’s moratorium, which was originally established via executive order by Gov. Gretchen Whitmer, expired July 16. The expiration allowed residential landlord-tenant cases return to daily court dockets and people can, and will, face eviction.

It means households living paycheck-to-paycheck, locals dealing with the unemployment system’s red tape and every person still out of work amid COVID-spurred layoffs have a new fear on the horizon — homelessness.

Local data suggests 35 to 40 percent of northern Michigan residents fall into those categories — one missed paycheck from disaster.

“That financial strain is real and it’s immediate, no question,” said Matt McCauley, CEO of Networks Northwest, which focuses on connecting locals with employment opportunities. “These working families may — and likely have had to — make some tough choices.”

Lucha and Temple spent months living out of their car before a call for help and stroke of luck landed them in the second-floor apartment they now call home.

“I just … I did not want to go down that road again,” Lucha said, recalling the worries that pulled her from sleep from April into July. “(Bobbie) was afraid we were going to have to put our dogs in the pound, because it (would be) hard to try to live in a car with them again.”

Those past troubles returned in late March, when Temple reported to her factory shift to be told she was being laid off, Lucha said.

A week later, a letter in the mail informed Temple she had no job to return to.

When Temple finally found work her new boss could only offer 15 or 16 hours per week.

They’d been living off Lucha’s disability — only enough to cover rent each month.

“You physically cannot live off of $700 a month,” Lucha said. “(That’s when) I knew we were gonna keep going into the hole.”

The couple owed more than $2,800 in missed rent payments by the end of July. Temple had little family to reach out to, and Lucha refused to burden her three grown children.

Lucha gathered courage and went to her landlord, Holly — who’d saved the couple from their last bout of homelessness through support from the Northwest Michigan Community Action Agency.

The nonprofit organizes its own eviction diversion program, according to Programs Manager Sarah Hughes. Since July, NMCAA officials have also been tasked with facilitating the region’s portion of Gov. Whitmer’s statewide Eviction Diversion Program, which she signed into existence via executive order in late June.

The program allotted $50 million of federal CARES Act funding toward settling landlord-tenant disputes — ideally, paying what’s owed to landlords and heading off eviction for those who fell behind.

Case managers help tenants and landlords reach a settlement to secure continued housing in exchange for a chunk of what they’re owed, Hughes said. If they agree to work under the program, landlords must halt eviction proceedings and forgive any remaining post-payout balances.

Eligibility depends on household income, how much is owed and how much a tenant’s monthly rent is, said Nichole Johnson, an NMCAA housing case manager. Unpaid rent compiled before March 1 won’t be included in rent forgiveness, she added.

The process tends to go quickly and smoothly, Johnson said, and cases are often wrapped within days — provided there’s buy-in from all sides.

Johnson guided Lucha, Temple and their landlord through that process soon after its mid-July implementation.

Hughes couldn’t say how many will be helped — but an influx of calls have kept case managers busy.

Ashley Halladay-Schmandt, director of the Northwest Michigan Coalition to End Homelessness, has seen an identical jump in calls. Normally, the group fields about 15 per week, she said.

Since the moratorium ended, that number jumped to more than 40.

Other community resources have seen a similar wave of calls.

For many in Lucha’s shoes, asking for help isn’t so easy.

“It’s scary for a lot of people right now,” said Tony Lentych, Traverse City Housing Commission executive director. “Nobody wants to have to admit they may not have a job in a few months.”

Not everyone is eligible — and for those who are, only so much funding is available.

NMCAA was allotted about $500,000 to work with, Hughes said. It’s a lot of money, but northern Michigan’s pricey rentals leave a question of how long it’ll last.

“There’s a lot of anxiety from both sides — ‘if I don’t get help paying this, I have nowhere else to go,’” Johnson said. “The shelters seem to be full all the time, there’s no rentals out there right now.”

It’s a hard thing for advocates to process — those who can’t be helped may have no other place to go.

“We’re worried that people have exhausted all those resources,” said Ryan Hannon, Goodwill street outreach coordinator. “Before the pandemic, there were more people experiencing homelessness than the system could help. Any addition only creates more strain and chaos in the system.”

Hughes hopes to stretch those dollars as far as possible and keep as many families off northern Michigan’s streets as possible. Still, tenant-landlord settlements can be expensive.

“We’ve seen bills over $10,000 for back rent for one client,” Hughes said. “I’m hoping that it helps a ton of people — as many people as we absolutely can.”

In Detroit, demonstrators gathered around a city courthouse Aug. 17 to protest the moratorium’s end and call for a full stop to the city’s evictions, according to a Detroit Free Press report.

A Michigan Radio look into the matter from July 16 touted concerns and warnings from housing experts.

For now, there’s been little talk of continued funding for the state’s Eviction Diversion Program, and a now-expired, more limited federal moratorium’s fate remains in the air, the Washington Post reported.

Nationally, some 23 million people are at risk of eviction as moratoriums expire, according to the Associated Press. Along with the federal moratorium, another 30 state moratoriums have ended since May, according to a Princeton University study.

Experts predict the problem will only worsen in coming weeks as 30 million people remain unemployed, and extra benefits run dry.

And the problem isn’t going away.

Lentych said that even if the COVID-19 pandemic recedes, pending evictions, trashed credit scores and deep financial wounds won’t disappear with it.

For those willing to navigate it, relief is out there — at least a temporary relief from anxiety and sleepless nights.

“(It was a) miracle, basically,” Lucha said. “Now that we can start new again and get back on track, that’s one less worry.”

At least, until funding runs dry.

Those in need of help with rent repayment can reach the Northwest Michigan Community Action Agency at 844-900-0500.

Find other community resources by texting 211.