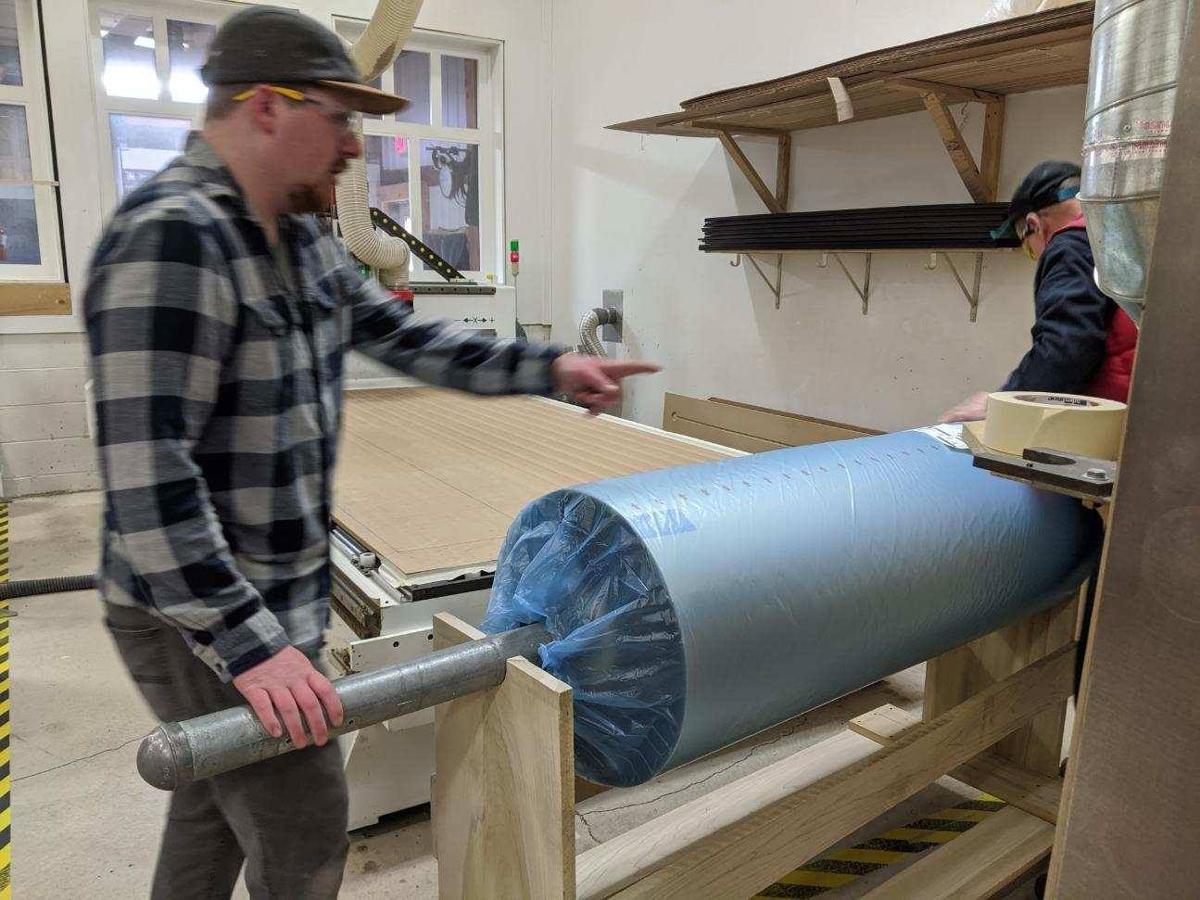 Workers at Shaggy’s Copper Country Skis in Boyne City prepare to make face shields for use by medical professionals. 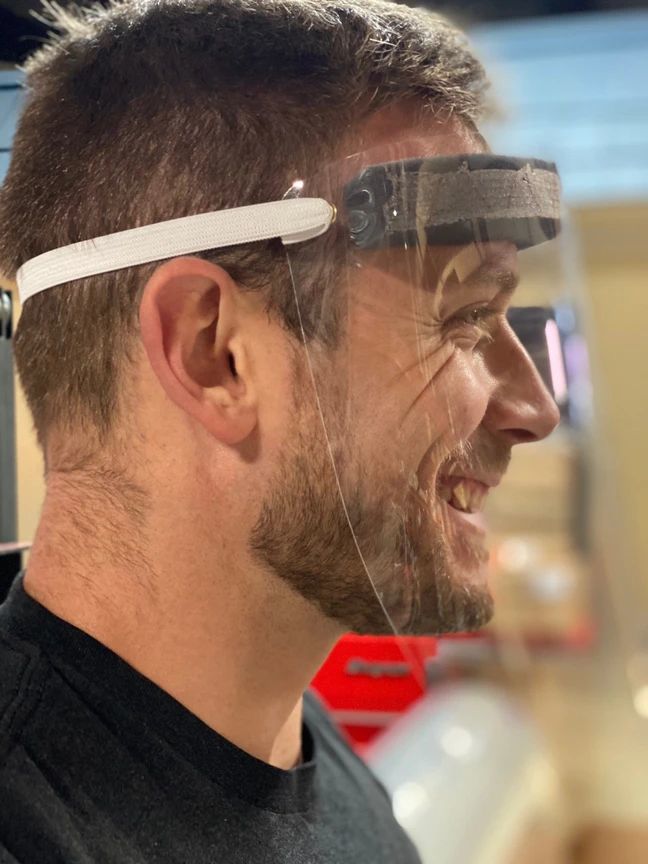 1-800-STENCIL employee Greg Hoese models a disposable face shield being made at the Boyne City company. 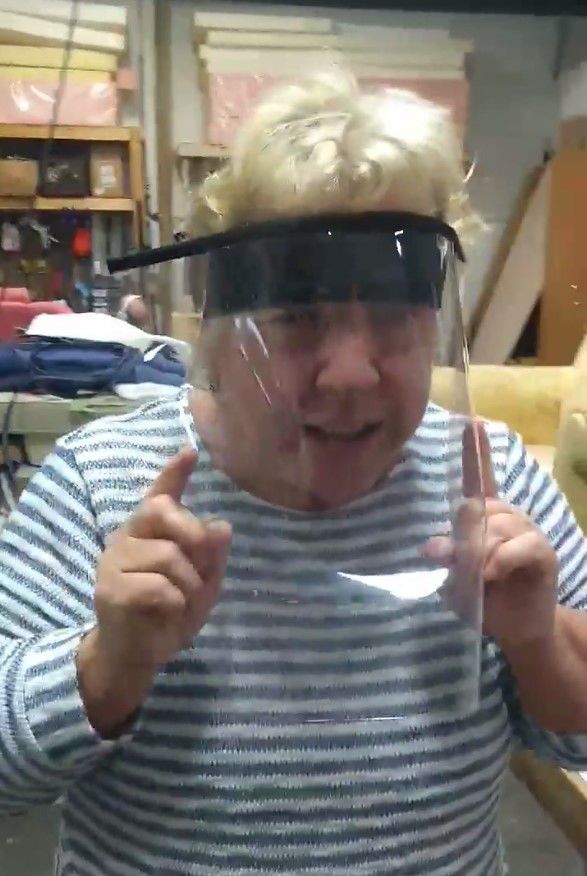 The Upholstery Alternative owner Colleen Fryer models the face shield she is producing in Traverse City in this screen capture from a video she posted on social media. 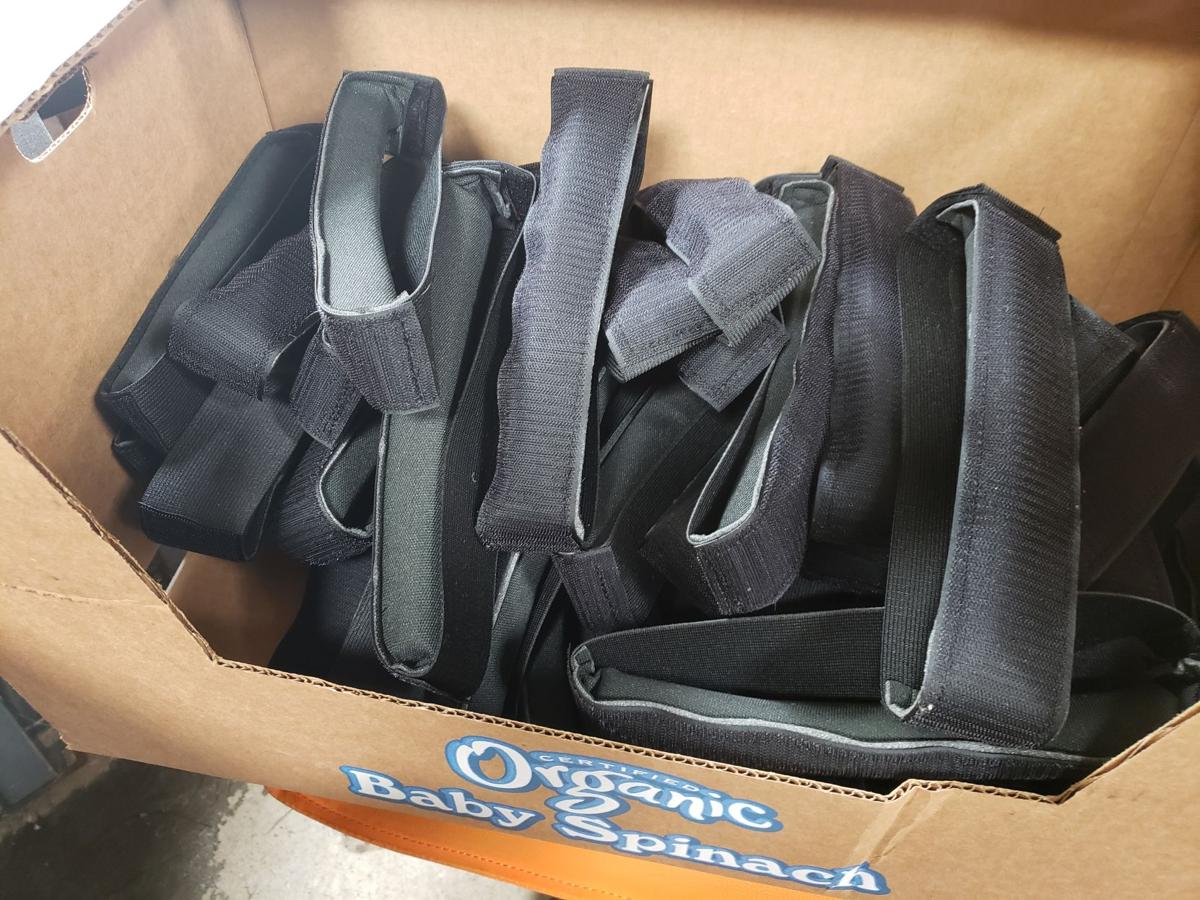 Completed headbands fill a box at The Upholstery Alternative in Traverse City.

Workers at Shaggy’s Copper Country Skis in Boyne City prepare to make face shields for use by medical professionals.

1-800-STENCIL employee Greg Hoese models a disposable face shield being made at the Boyne City company.

The Upholstery Alternative owner Colleen Fryer models the face shield she is producing in Traverse City in this screen capture from a video she posted on social media.

Completed headbands fill a box at The Upholstery Alternative in Traverse City.

A ski maker, an upholsterer, a parking lot stencil company and a 3D-printing startup are among businesses that are keeping workers employed while simultaneously filling a need for personal protective gear during the COVID-19 pandemic.

All share the dual motivations of helping protect medical workers from the spreading virus and keeping their own workers out of the unemployment system, which is seeing staggering enrollment increases because of nationwide shutdowns.

The competition to source protective gear has intensified in recent days as coronavirus deaths have mounted quickly in Italy, Spain and New York, the most lethal hot spot in the U.S. Medical facilities everywhere need filtration masks and transparent face shields to protect staff working with COVID-19 patients.

“We do upholstery and slipcovers,” said Colleen Fryer, owner of The Upholstery Alternative in Traverse City. “And now face shields. We have to stay open somehow. I like to help in any way possible.”

“When all this started happening, right around the time schools were shutting down,” said Jeff Thompson, co-owner of Shaggy’s Copper Country Skis in Boyne City, “we put a post up on our Facebook page that just said, ‘Hey, these are our capabilities. If we can help out anyone, let us know.’”

“The idea in general was, we saw a very simple product that I know our facility had the capability of producing,” said Jonathan Thompson, owner of 1-800-STENCIL in Boyne City.

Jeff and Jonathan are brothers. They separately came up with the idea of keeping their employees on the payroll by swiveling efforts from their primary products to personal protective gear. They combined efforts after learning they both had settled on producing face shields.

“My company and his company were kind of working parallel on the project without knowledge of each other doing it,” said Jonathan. “When we found out we were basically doing the same thing, we made the decision to partner up on it and pool resources.”

Workers at both companies began cutting and gluing face shields last week. Shaggy’s is keeping seven people on the payroll. 1-800-STENCIL is keeping five people working. Together, the two companies had churned out more than 13,000 face shields in their first week of production.

“We do look at this as a disposable product — it is something that everybody needs, and it has to get out there,” Jonathan said. “We are simply trying to lower the financial burden on the state from the unemployment aspect, as well as keeping our people around. We want these to go to institutions, we want them to go to the hospital systems.”

The two Boyne City companies have sold to McLaren Northern Michigan Hospital in Petoskey, and are getting orders from other hospitals in Michigan and beyond.

The Upholstery Alternative’s Fryer created her own product design based on materials she had on hand.

“I designed a face shield based on what I had here in the shop and my knowledge of how to sew it together,” she said.

Fryer and her crew of five employees began making the reusable face shields just more than a week ago and have completed several hundred.

“The women’s clinic purchased some,” she said, and others are earmarked for Grand Rapids facilities and New York City’s Rikers Island jail.

DreamLab Industries LLC owner Brandon Williams reprogrammed his 3D printers in Traverse City to make antimicrobial face masks that he is marketing to the public. Williams also designed a device he calls the Handy Touch. Attachable to a keychain, it is intended to allow people to turn door handles and interact with touchscreens without actually touching them.

A couple days after Shaggy’s made its social media post, McLaren Northern Michigan asked the company if it could produce personal protective equipment. It arranged to deliver samples to the company in Boyne City, but a more direct delivery method presented itself — Thompson was in the hospital with his wife, who had just given birth.

“We were actually in the recovery room, and the vice president of McLaren Northern Michigan came and dropped off some samples and said, ‘Hey, do you think this is something you can do?’” said Jeff Thompson.

“All of the pieces came together quickly,” McLaren Northern Michigan Chief Executive Officer Todd Burch said in a release. “When we called the shop they told us that one of the owners, Jeff Thompson, and his wife had just had a baby and were already in the hospital.”

On the spot, Thompson determined that his company probably could make face shields, though a couple of other products the hospital needed appeared beyond its capabilities.

Other hospitals since have begun doing business with the Thompsons’ combined face-shield effort.

Fryer posted her creation on social media and hopes more sales will flow naturally. She’s proud of her design, which features a hook-and-loop fastener between headband and shield, which can be disinfected.

“Being there’s such a scarcity of personal protection, I thought it would be a good idea to make something they can wash and reuse.”

James "Jim" Joseph Beckett, 97, passed away at home in the care of family on Friday, May 29, 2020. Jim's full obituary and service details will appear in a later edition of the Record Eagle. Jim and his family are in the care of the Reynolds-Jonkhoff Funeral Home and Cremation Services.