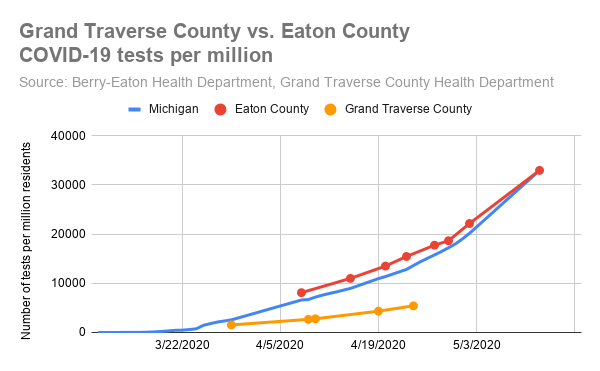 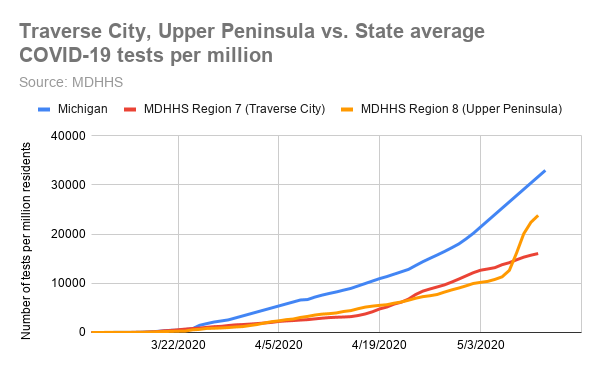 TRAVERSE CITY — Grand Traverse County attracted attention from health officials and residents alike during the past few weeks for its unusually small number of confirmed COVID-19 cases — as few as 19 until about a week ago.

But experts say test results likely provide a skewed view of the virus’ presence in the county. That’s because, while the Grand Traverse County’s positive test results are extraordinarily low, other data shows the county isn’t much different than other similarly sized Michigan communities.

Residents have expressed concern over the number of locally reported COVID-related deaths, a tally that appears high when compared to the number of confirmed cases. Many asked whether the county simply had an unusually high death rate from the disease, or whether local testing efforts simply haven’t captured an accurate picture of the virus’ spread in the region.

Data indicates the scale of testing in Grand Traverse County may have contributed to skewed statistics.

A Record-Eagle data analysis found the number of deaths in Grand Traverse County is in line with other counties of similar size. Eaton County, for instance, has reported six deaths among 161 cases to date according to the latest numbers from the Michigan Department of Health and Human Services.

Eaton County’s substantially lower ratio of deaths to confirmed COVID-19 cases appear as if the disease isn’t the same.

Shah says that is clearly not true.

“One thing that we’re doing badly in America is we are under counting deaths attributed to COVID,” Shah said. “The error rates are huge, because, No. 1, the definition of what counts as a COVID death changes. You have to have a positive test, and then only you get counted.”

What made Eaton County different, according to data from the Berry-Eaton Health Department, was a per-capita test rate significantly higher than Michigan’s statewide average.

Officials declined to provide the Record-Eagle the most up to date statistics, indicating they no longer track the number of tests administered as more test locations opened in the county.

Region 7 remained far behind the statewide trend as of May 13.

MDHHS has not immediately provided answers to multiple questions the Record-Eagle asked beginning on May 4.

Anne Barna, Public Information Officer for the Berry-Eaton Health Department, said testing numbers in Eaton County initially were buoyed by the capacity at nearby medical facilities in Lansing.

“What we saw happening early on is different hospitals had different capacities to test people,” Barna said. “At this point most providers can do COVID-19 testing.”

Barna said state officials plan to expand testing in areas not already saturated, but she said the state focus so far is on those where COVID-19 has hit the hardest; Michigan’s majority-minority communities.

“We know that about 40 percent of the deaths (in Michigan) are in African Americans,” said Dr. Joneigh Khaldun, Michigan’s chief medical executive. “There are various reasons for that including disparities and poverty and people having to come out for essential work.”

Dr. Jean Kerver, a professor of epidemiology at Michigan State University’s Traverse City campus, said one explanation for the small number of detected cases in Grand Traverse County may be earl spread during the first weeks of the pandemic.

“That is right when social distancing came into play,” Kerver said. “What could have happened (in Grand Traverse County) is physicians told people to socially isolate and people did what they were supposed to do. They called and they didn’t go and infect other people.”

Kerver, who also volunteers in the state’s contact tracing efforts, said testing was not available for those contacts in March regardless of if they were showing symptoms. People who had contact with the virus were told by physicians to stay home and isolate and she hopes that’s what actually happened.

“To the extent that days made a difference, we know that,” Shah said. “We see the experience of Los Angeles versus San Francisco, New York versus California, how a week delay in a lockdown order allowed for exponential spread.

“This is, despite our best intentions, the nature of the density of the population.”

Is the region's testing problem solved?

Throughout April, political gridlock between Gov. Gretchen Whitmer and the White House came into public discussion.

Beginning with criticism by President Donald Trump in a televised town hall on Fox News, Whitmer responded the following day that she’d repeatedly made it clear to the White House what the state needed in terms of lab materials.

“I know people are tired of ‘swab,’ ‘swab,’ ‘swab.’ What is so complicated about a swab? They’re not that complicated, but each of these tests depend on a specific type of swab,” Whitmer said. “When our shipment from the federal government comes in and it is 100 percent foam swabs, it means we can’t execute those for all of these other tests that we have.”

Whitmer has said the state is committed to administering 15,000 tests per day in May with a goal of doubling that tally to meet the CDC’s recommendation of testing 2 percent of the state’s population on a weekly basis.

Since then, Grand Traverse County’s number of confirmed cases increased by three this week alone.