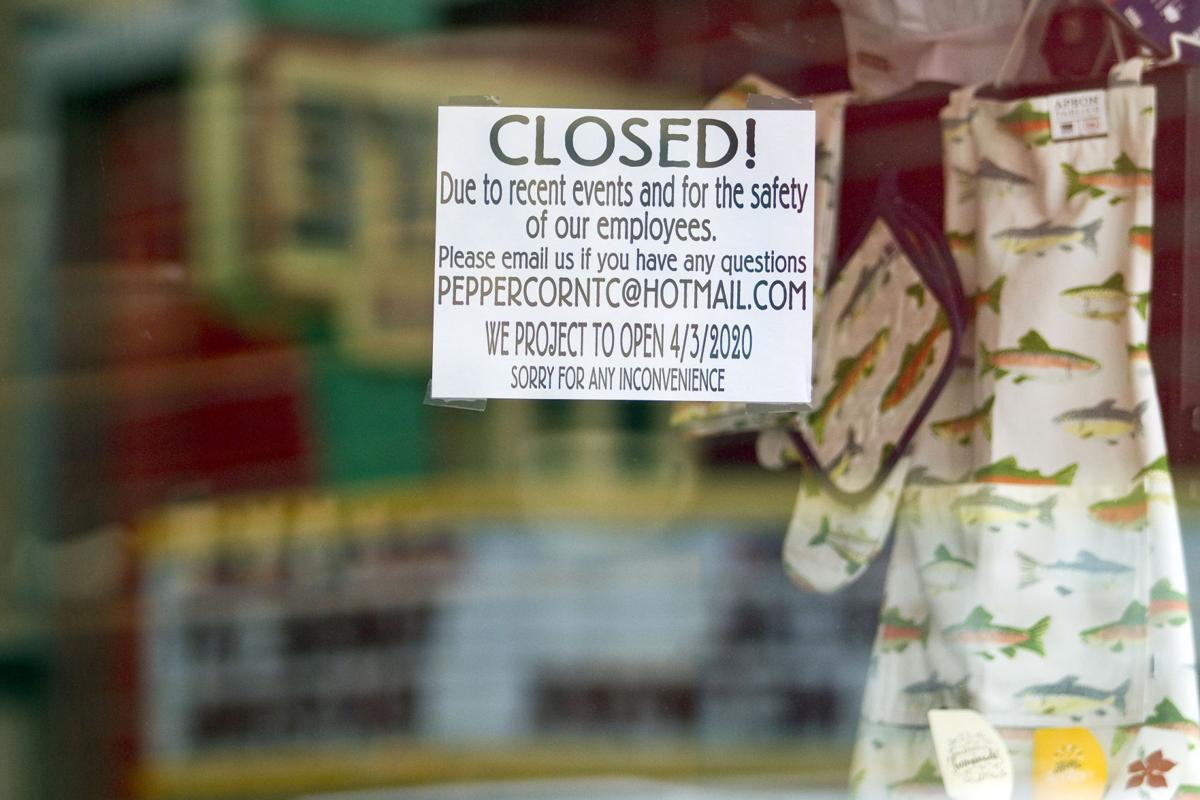 A sign alerts customers that Peppercorn will be closed, hopefully to reopen on April 3, in Traverse City. 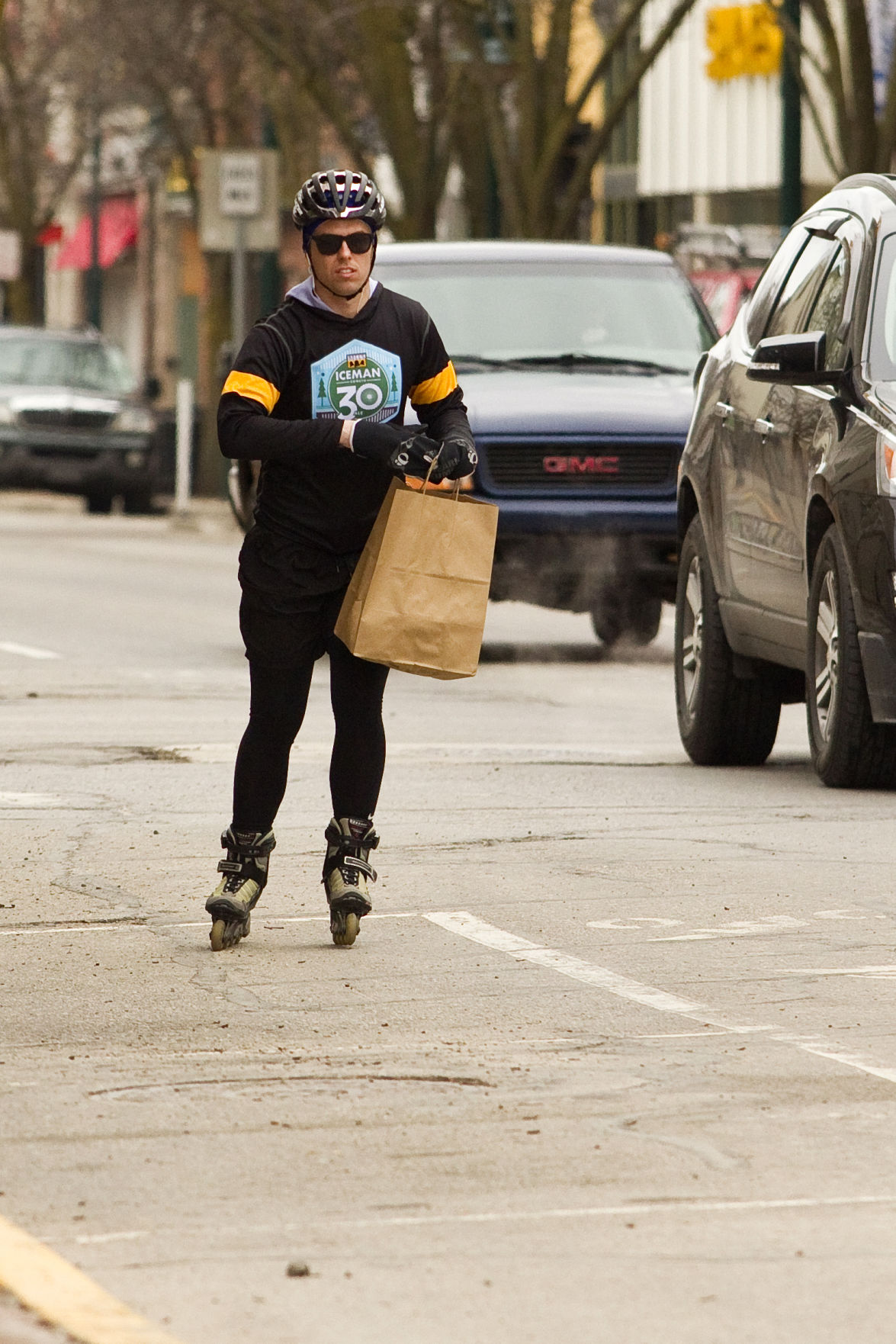 Wes Sovis brings food from Brew in downtown Traverse City to a friend quarantined following travel, shortly before Gov. Gretchen Whitmer’s order for residents to stay at home to help prevent the spread of the COVID-19 virus. 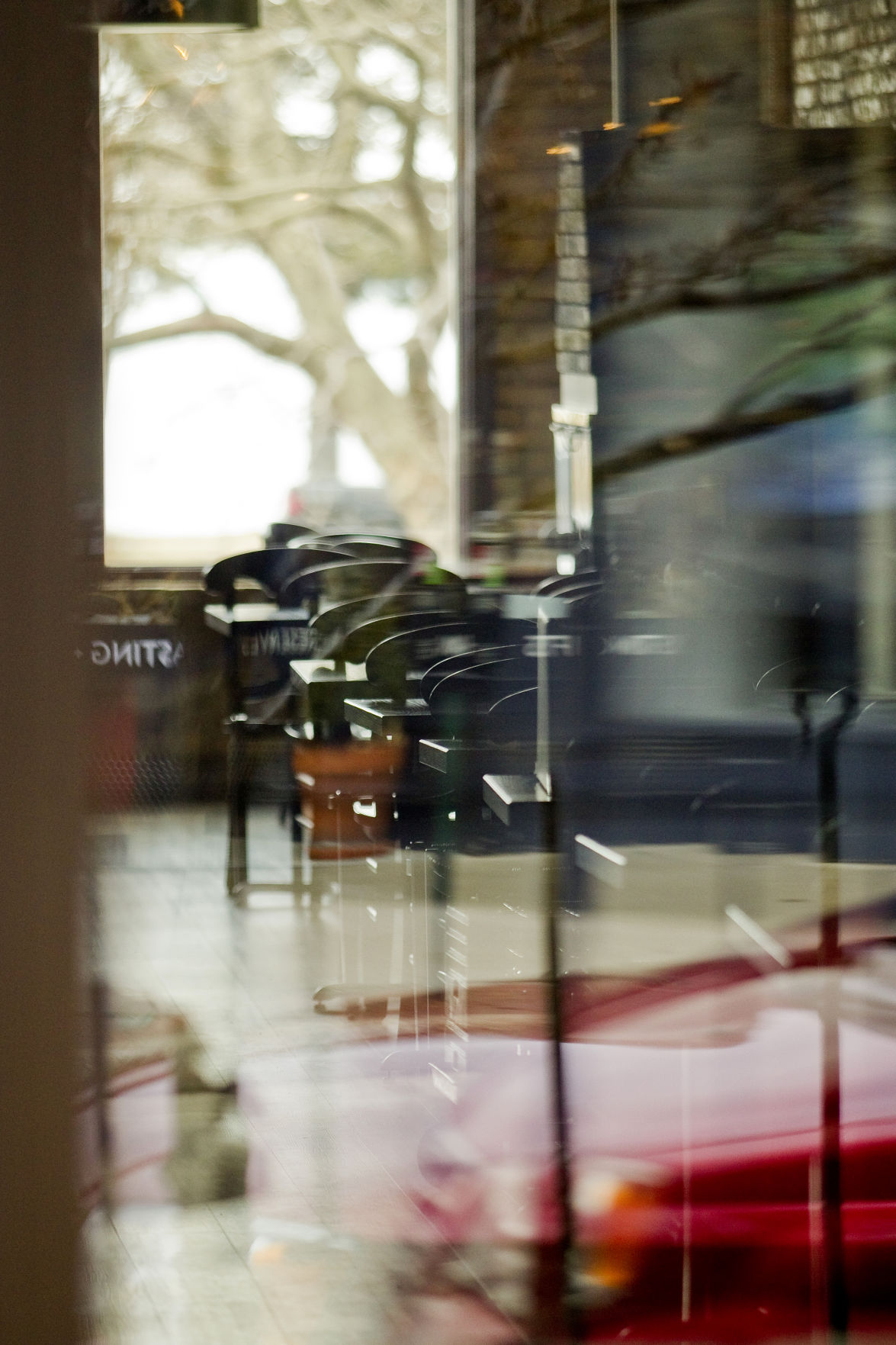 Empty tables sit inside Amical in Traverse City. Gov. Gretchen Whitmer ordered residents to stay at home, starting at 12:01 p.m. Monday, to help prevent the spread of the COVID-19 virus.

A sign alerts customers that Peppercorn will be closed, hopefully to reopen on April 3, in Traverse City.

Wes Sovis brings food from Brew in downtown Traverse City to a friend quarantined following travel, shortly before Gov. Gretchen Whitmer’s order for residents to stay at home to help prevent the spread of the COVID-19 virus.

Empty tables sit inside Amical in Traverse City. Gov. Gretchen Whitmer ordered residents to stay at home, starting at 12:01 p.m. Monday, to help prevent the spread of the COVID-19 virus.

Gov. Gretchen Whitmer said she ordered the dramatic step to save lives.

“This is not a recommendation. This is an order,” she said.

The order will begin at 12:01 a.m. Tuesday and last for a minimum three weeks. Essential businesses such as grocery stores, gas stations, banks and pharmacies will be open, and people can run, walk, hike and ride bikes as long as they stay 6 feet from others.

Whitmer said the measure is required because too many people continued to go out and about unnecessarily.

“You are not immune from this. You can get this virus,” she said, adding people can carry the virus and sicken others for weeks before knowing they are themselves ill.

Whitmer’s restrictive order does, however, allow for people to travel between two homes in the state, or to travel from another state to a home in Michigan, or vice versa.

Not everyone thinks that’s wise.

Traverse City Mayor Jim Carruthers said people should shelter in place, wherever they are and not travel up north because they believe it may be safer.

“People may be bringing the virus with them without knowing it,” Carruthers said from his own self-isolation at home.

The mayor recently returned to Traverse City from a trip to Puerto Rico to celebrate his wedding. He entered quarantine by choice because it’s the standing marching orders from health experts, he said.

Carruthers said those who may own retreat property up north but don’t live here year-round shouldn’t travel here to escape the virus. They should hunker down where they already are for the length of the quarantine, he said.

Not only might travelers carry the virus with them, Carruthers said, but they may put excess stress on medical treatment facilities that already don’t have enough supplies and equipment. There are more hospital beds, medical workers and ventilators in downstate hospitals, he said.

“You might be better off to stay where you are,” Carruthers said.

He said it’s easy to understand how watching spring unfold in northern Michigan may be a temptation during this stay-home order, but this is a health crisis during which people should heed the medical experts’ warnings.

“It’s not a vacation. That’s what people need to realize. They need to stay at home, not go to their vacation home,” Carruthers said. “Our privilege is getting the best of us.”

“According to the governor’s executive order, people are able to come to their vacation homes, summer homes or second homes in northern Michigan. However, this definitely poses a threat to us, as we don’t know where these people are returning or coming from. They very well could be coming from an area that has a high rate of community transmission,” said Wendy Hirschenberger, health officer for the Grand Traverse County Health Department.

She recommends those traveling from a high-risk area with community transmission of COVID-19 should self-quarantine for 14 days. It’s a matter of safety for others, she said.

“It is very important for people who are out conducting essential personal business like grocery shopping or going to the pharmacy to be very mindful to follow the rules of washing your hands, not touching your face, staying home when you are sick, because with the influx of people returning, there is a higher chance that you could be exposed in our community.”

Michelle Klein, director of personal health for the Benzie-Leelanau District Health Department, said anyone who does travel to an up north home should have a plan in place.

That plan should include having provisions delivered or picked up curbside to minimize community spread, as well as being able to contact primary caregivers for testing orders should they begin to feel sick, she said.

“If you get sick up here, what’s your plan,” Klein said.

As the first full week of spring starts, the phone has been ringing at Leelanau Vacation Rentals in Glen Arbor. The nature of the calls are not the usual though.

As much as the calls may likely mean “it’s going to be a tough summer,” Ihme said the negative calls are positive for northern Michigan.

“Everybody really needs to stay home and be safe,” Ihme said.

People who own vacation properties in the area appear to be sheltering in place rather than fleeing to in northwest Lower Michigan, according to area property management companies.

“I haven’t had any of them (property owners) call. Not a one,” said Tim Cooley, owner of Cooley Property Maintenance in Interlochen. “I haven’t seen that. I have not seen that at all.”

“But right now we don’t have anybody working,” Cooley said. “Everybody’s at home. We’re doing the right thing.”

Cooley manages about 18 properties. All currently are vacant.

“They’re not coming up yet,” Cooley said of his clients. “We haven’t gotten rid of all our snow yet, and a lot people aren’t set up for summer yet.”

Tim Webb, president of Granville Property Management, also said he hasn’t heard of anyone coming north earlier than usual in an effort to escape more populated areas because of the COVID-19 scare.

Whitmer said the virus is spreading exponentially in Michigan and figures doubled during the recent weekend.

Michigan is in the top five states in the nation in number of confirmed COVID-19 cases.

Without a cure or vaccine, social distancing is the only tool available to help the state’s medical providers, she said.

“We have a shot at helping our health care system meet our needs,” Whitmer said.

Hospitals and health care workers across the state will be overwhelmed and unable to treat all those who will require care unless “additional aggressive measures” are taken, Whitmer said.

Michigan health officials have recorded more than 1,300 confirmed cases of COVID-19, the disease caused by the novel coronavirus, as well as at least 15 deaths.

If Michigan authorities don’t act, predictive models show there will be as many as 5,000 cases of COVID-19 in five days, said Dr. Joneigh Khaldun, the state’s chief medical executive.

“We are acting right now to decrease that number,” she said.

Under certain models, it’s possible that more than 70 percent of Michigan residents — 7 million people — could become infected, and 1 million would need to be admitted to hospitals, unless the virus is slowed down, Whitmer said.

The goal is to buy time so hospitals are not overwhelmed and have a “fighting chance” by creating surge capacity, accelerating testing and developing therapeutic drugs, Whitmer said.

Locally, at least 13 of the state’s identified cases have been found in residents of northwest Lower Michigan.

There are four cases in Otsego County, three cases in Charlevoix County residents, two in Grand Traverse, and one each in Leelanau and Wexford counties, health officials reported.

Officials at the Health Department of Northwest Michigan said several people may have been exposed at a restaurant just south of Gaylord — Bennethum’s Northern Inn — on March 12 and March 14.

New cases discovered in Manistee and Kalkaska counties were announced Monday by officials with Health Department District No. 10. No extra details were yet known about those patients, and the cases have not yet been included with statewide statistics.

Whitmer’s Monday order follows others that limited crowds at popular gathering spots and closed schools. Bars, fitness clubs and theaters are closed, and restaurants can only prepare food for carry-out. Many church services have been canceled.

Any local plans for enforcing the governor’s order remained in the works Monday.

“At least at this point, we’re gonna look at that and see,” he said Monday afternoon. “Hopefully, people will stay at home.”

“We’re gonna have to rely on everybody to do their part. We’ll address each situation as it comes up,” he said. “I think we’re fortunate with our community — that everybody will respect the order and do what they need to do to protect everybody.”

A state police spokesman, Lt. Mike Shaw, tried to ease any anxieties: “It’s not martial law. It’s not a lockdown. It’s a way for you to protect your family.”

For most people, the coronavirus causes only mild or moderate symptoms, such as fever and cough. For some, especially older adults and people with existing health problems, it can cause more severe illness, including pneumonia. The vast majority of people recover.

According to the World Health Organization, people with mild illness recover in about two weeks, while those with more severe illness may take three to six weeks to recover.

Record-Eagle reporters Brooke Kansier, Mark Urban and Dan Nielsen, along with the Associated Press, contributed to this article.

99, of Traverse City, passed away Monday April 6, 2020. Memorial services will be announced at a later time. The family is being cared for by the Reynolds-Jonkhoff Funeral Home.

87, of Traverse City, passed away on Saturday, April 4, 2020 at Munson Medical Center, in the loving care of her family. A full obituary will be published in the later edition of the Record-Eagle. Please share a memory with Clarine's family by visiting her tribute page at www.reynolds-jonkho…

92, of Traverse City, passed away peacefully on Friday, April 3, 2020 at the Grand Traverse Pavilions. Shirley's full obituary will appear in a later edition of the Record-Eagle. The family is in the care of the Reynolds-Jonkhoff Funeral Home and Cremation Services.

88, of Traverse City, passed away April 3, 2020. Funeral arrangements are pending at this time. The family is being cared for by the Reynolds-Jonkhoff Funeral Home.