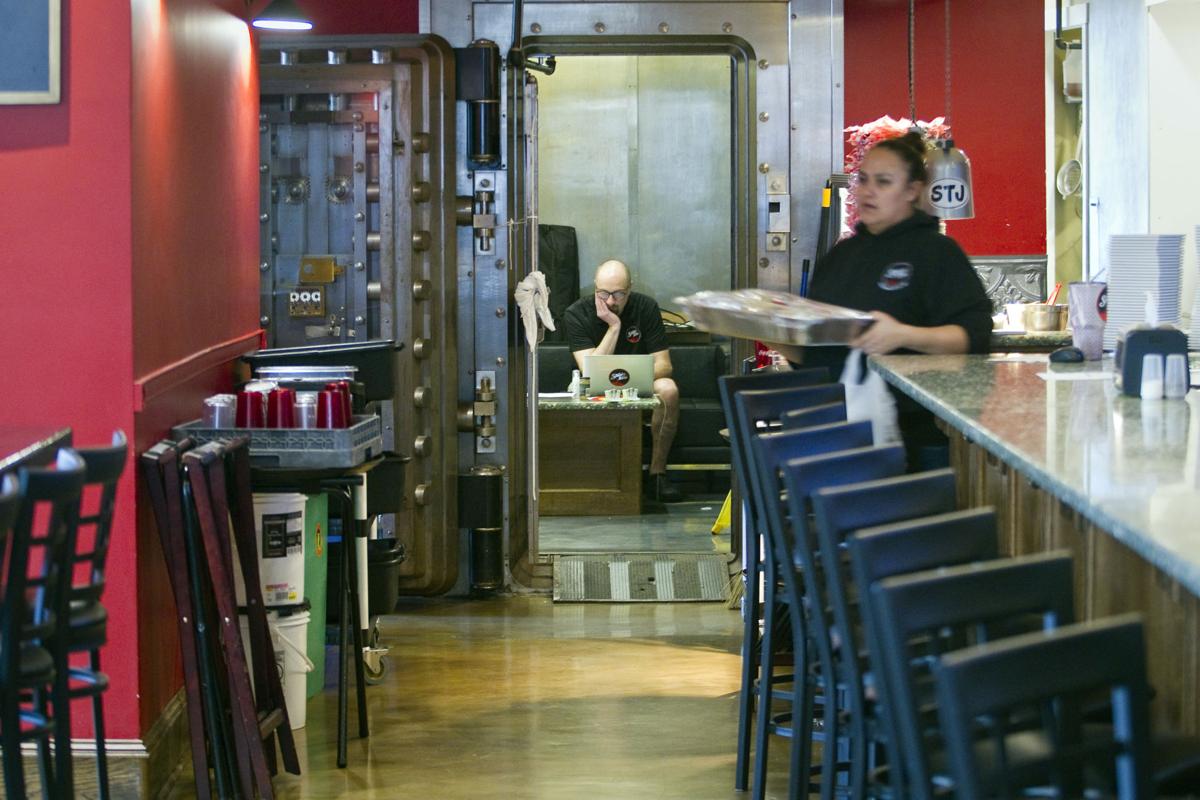 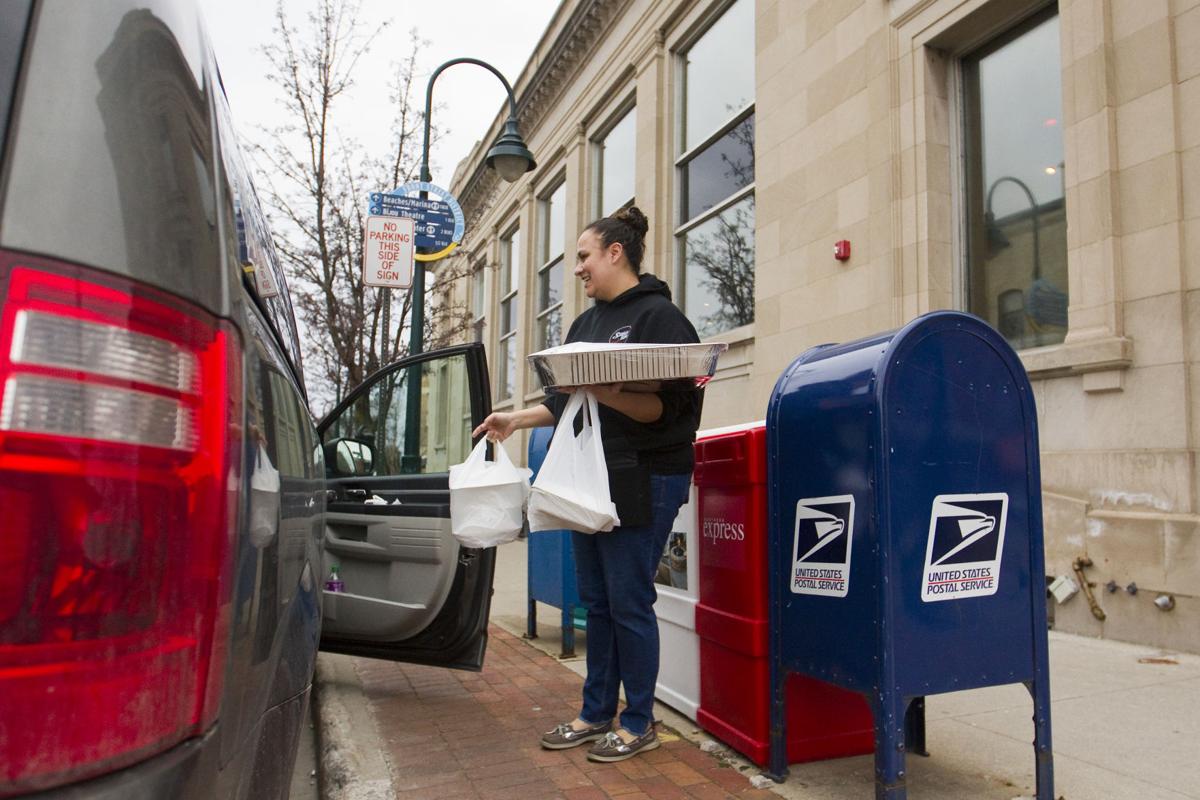 Teia John-Wheelock carries an order at Sparks BBQ to a customer's car as downtown Traverse City restaurants and bars prepare for a State of Michigan order to close their doors at 3 p.m. on Monday, March 16, 2020, with the exception of carryout/delivery service.

Teia John-Wheelock carries an order at Sparks BBQ to a customer's car as downtown Traverse City restaurants and bars prepare for a State of Michigan order to close their doors at 3 p.m. on Monday, March 16, 2020, with the exception of carryout/delivery service.

TRAVERSE CITY — State health officials found the first two cases of COVID-19 in northern Michigan — one in Traverse City and the other in Gaylord.

State laboratory results on Monday identified patients at Munson Healthcare hospitals in both cities as presumptive positive cases for the COVID-19 disease caused by the novel coronavirus disease. One patient remains hospitalized and the other went home to recuperate in isolation.

“I do know the state lab only has the capacity to do about 100 tests a day,” Klein said. “I know they are prioritizing.”

Health department officials will interview the patient to identify and contact anyone he may have exposed, then monitor his condition during isolation until he is no longer contagious, officials said.

Officials with the Health Department of Northwest Michigan could not be reached late Monday about the date the Otsego County man was tested.

This is the second COVID-19 case for the four-county district department after a Charlevoix County woman tested positive for COVID-19 Friday in a downstate hospital following international travel. However, that patient has not yet returned home to northern Michigan.

Munson officials said all safety precautions recommended by the U.S. Center for Disease Control and Prevention and World Health Organization were followed in treating both patients.

Meanwhile, the entire region spent Monday reeling with news that tourist town Traverse City and surrounding communities may by design seem a bit abandoned in coming days and weeks.

Michigan Gov. Gretchen Whitmer on Monday banned dine-in eating at restaurants and ordered the closure of all bars, movie theaters, gyms and other sports facilities to curb the spread of the coronavirus. The expanded prohibition effectively forced social distancing meant to slow down the infection rate across the state.

The move is expected to severely crimp northwest Lower Michigan’s economy, where hundreds of area residents work in the impacted fields.

“There are places where it’s going to hurt the bottom line more than others. There are some businesses that use this week to stay open next week. They live week to week like people that live paycheck to paycheck,” said Scott Lama, general manager at Dillinger’s Pub in downtown Traverse City.

At the same time, local medical care providers are setting up for expected waves of patients who will require testing and perhaps treatment for COVID-19. With each case identified, health officials expect some related community spread.

Michigan currently logged at least 56 positive cases of COVID-19, nearly all in downstate areas. Among the cases announced Sunday was the state’s first infected child, a 5-year-old boy from Oakland County.

Whitmer last week declared a state of emergency in Michigan, closed all schools, prohibited gatherings of more than 250 people and restricted visits to hospitals, nursing homes and other facilities.

In Traverse City, Munson Healthcare officials canceled non-urgent and elective surgeries to free up space for the expected COVID-19 patients to come. Oncology and inpatient surgeries may receive special consideration.

“Patients who have been issued a lab order for COVID-19 testing from their primary care provider will be directed to the mobile collection site where samples will be taken to send to the state lab,” said Dianne Michalek, Munson’s vice-president of marketing and communications.

The mobile specimen collection center went live during the weekend, but only one person has so far come through to be screened, she said. Michalek also said because there are a limited number of test kits available, careful consideration will be given to who will be tested.

That lack of available test kits is a failure of government, said Sue Ann Bell, assistant professor of nursing and disaster response expert at the University of Michigan’s School of Nursing.

“We can likely assume there are infected people across all of Michigan,” Bell said on a telephone call from San Diego, where she’s been deployed as a member of a federal disaster response team.

The assistant professor said because so many Michigan residents likely are already infected with the new coronavirus, social distancing is key in order to not overrun medical facilities. That’s especially the case in more rural areas where resources are fewer, she said.

“As we all know, we are in uncertain and unprecedented times,” Bell said.

For most people, the virus causes only mild or moderate symptoms, such as fever and cough. For some, especially older adults and people with other health problems, it can cause more severe illness, including pneumonia.

The disease has infected more than 169,000 people worldwide, and more than 6,500 people have died.

The U.S. surgeon general said Monday that the United States is about where Italy was two weeks ago in the coronavirus struggle, a sign that infections are expected to rise.

“We are at a critical infection point in this country, people,” Surgeon General Dr. Jerome Adams told Fox News. “When you look at the projections, there’s every chance that we could be Italy.”

Yet he said the U.S. has opportunities to mitigate the pandemic.

About 3,800 cases have been reported in the United States and so far, more than 65 people have died from coronavirus. Although the numbers may not be directly comparable, the trajectory is, as Adams sees it.

Michigan state officials established a hotline for residents to call for answers to general questions. The hotline number is 1-888-535-6136 and is staffed between 8 a.m. and 5 p.m. daily.

The Associated Press and Record-Eagle reporter Mark Urban contributed information for this article.

If you feel sick