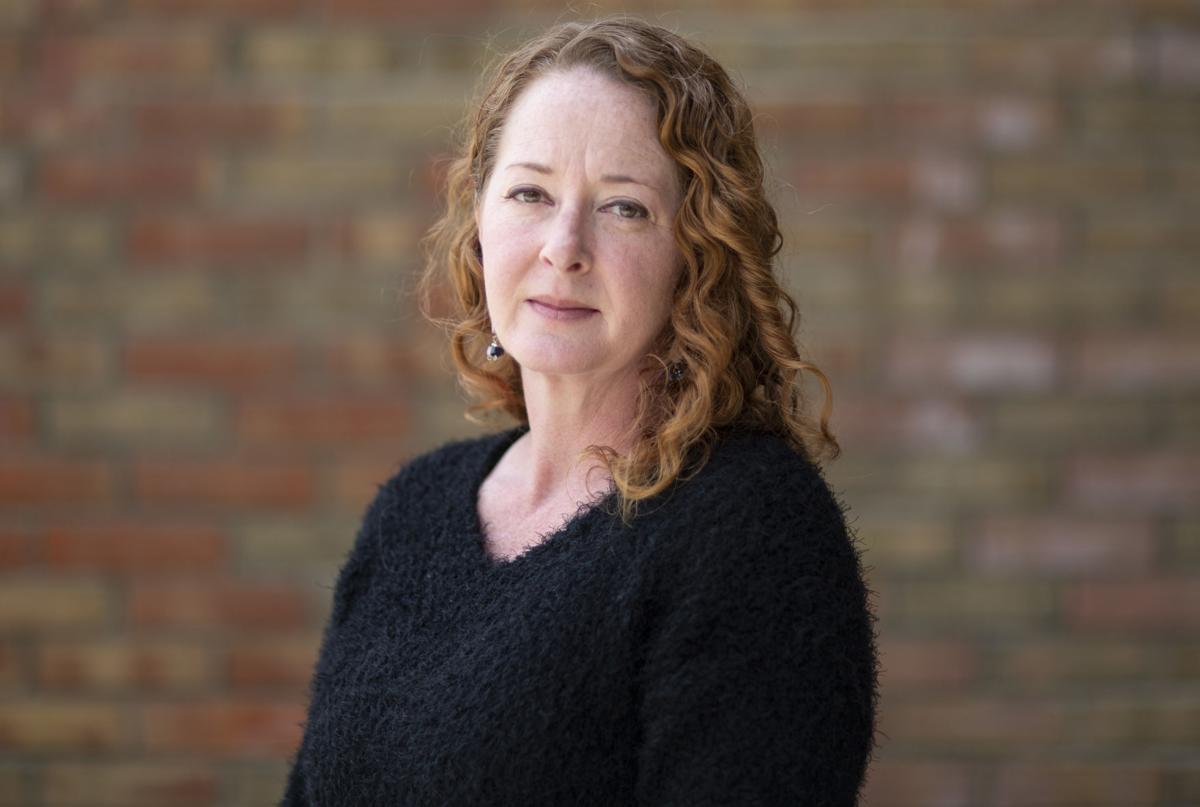 Women’s Resource Center Director of Advocacy Kristi Cogswell Boettcher poses for a portrait outside of the center in Traverse City. 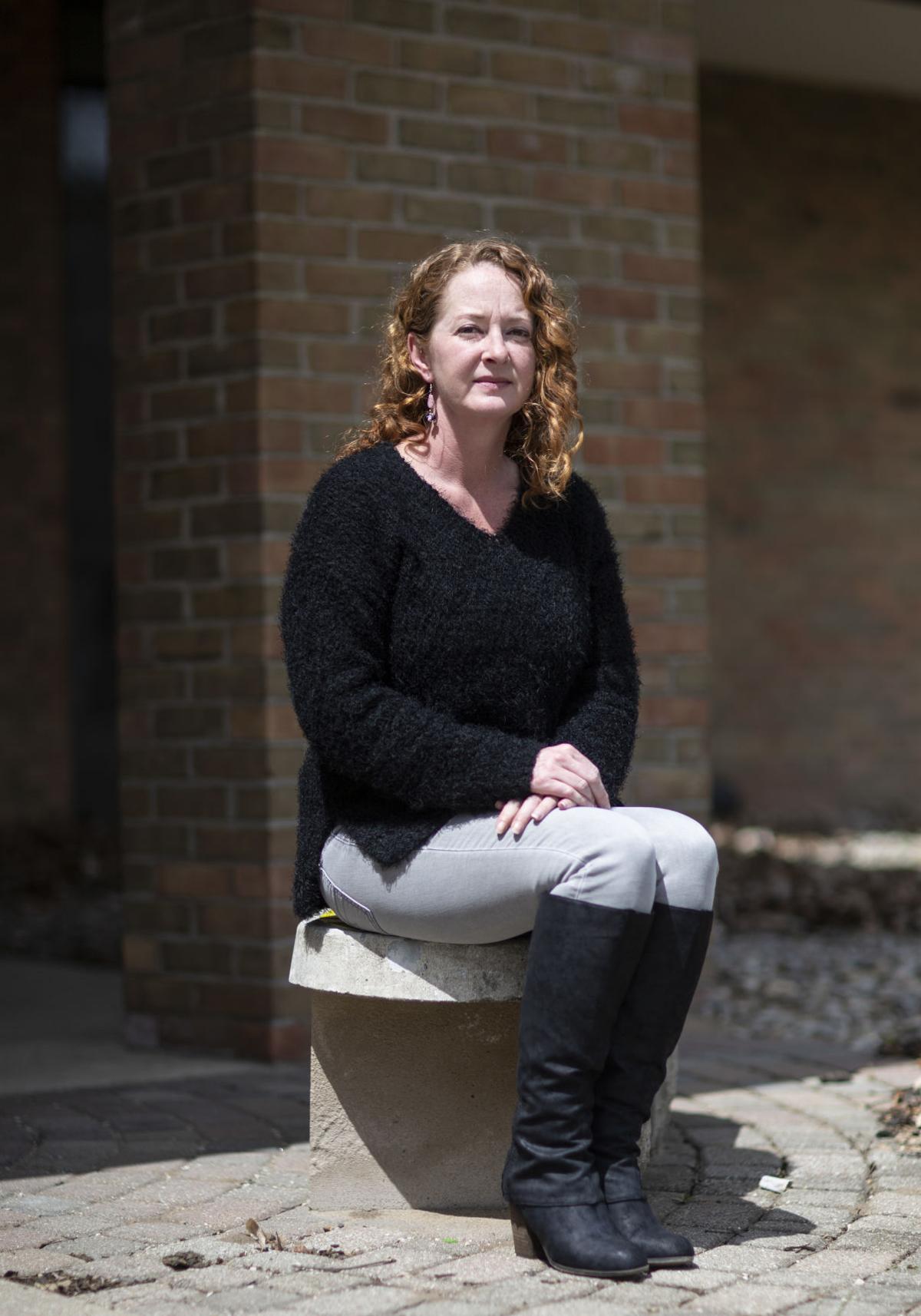 Women’s Resource Center Director of Advocacy Kristi Cogswell Boettcher poses for a portrait outside of the center in Traverse City on Tuesday. Boettcher is a survivor of domestic abuse. The center's building is closed to the public, but phones are staffed daily.

Women’s Resource Center Director of Advocacy Kristi Cogswell Boettcher poses for a portrait outside of the center in Traverse City.

Women’s Resource Center Director of Advocacy Kristi Cogswell Boettcher poses for a portrait outside of the center in Traverse City on Tuesday. Boettcher is a survivor of domestic abuse. The center's building is closed to the public, but phones are staffed daily.

TRAVERSE CITY — There are 15 years and 1,000 miles between Kristi Cogswell Boettcher and her abuser.

Even so, she still hangs on to a three-inch thick file that contains police reports, financial information and a letter written by her former insurance agent.

The agent had called Boettcher when her soon-to-be ex-husband tried to increase her insurance policy from $50,000 to $500,000.

“That was very scary,” Boettcher said.

She canceled the policy and asked the agent to write down the details, just in case. Her family members knew where the file was and they were instructed to take it to the police if anything ever happened to her.

That was in 2005 in South Carolina. She now has a new life in Traverse City, where as the director of advocacy for the Women’s Resource Center she helps other women who are being abused. Phones at the center are staffed daily, despite the office being closed during the pandemic.

One day advocates are overwhelmed with calls and the next day there may be no calls, said Juliette Schultz, executive director of the WRC, which helps those impacted by domestic and sexual violence.

For a domestic abuser, control of a victim is the goal and isolating them from friends, family and co-workers is a way of controlling them, Schultz said. The isolation imposed by the stay-at-home order coupled with an abuser who may be laid off from a job has created the ideal conditions for abuse to take place, she said.

Some survivors, as they are known, are in crisis and need to get out. Some want to know what their options are. Others need help with food, diapers or baby formula, especially now.

But many are hunkering down and waiting for the pandemic to blow over before taking any action, Schultz said, and that may be putting them in danger.

“My fear is that they’re not going to get out, that there is not going to be a good time to leave,” Boettcher said.

Grand Traverse County Undersheriff Michael Shea said he happened to look up at the call screen early Monday morning and saw two domestic violence incidents. The calls caught his eye because domestic calls at that hour are rare because people would normally be at work.

Shea said that while the numbers of domestic assaults are not up from this time last year, the assaults themselves are much more serious. The county has seen six felonious domestic assaults — those committed with a weapon that require medical attention — since March 17, compared to two during the same time period last year.

The serious nature of the assaults could indicate that there were prior incidents at the same address that went unreported, but are now escalating, Shea said.

Traverse City has more than 300 domestic violence reports per year, said police Chief Jeffrey O’Brien. Calls that come in are at all different levels and all are investigated, he said.

“We have domestic violence every day,” O’Brien said. “Some of them are arrested and some aren’t, but we deal with it every day in Traverse City.”

Benzie County had 14 domestic assaults in March, compared to the four or five the county usually sees, including a man who threatened to kill his family and attacked several law enforcement officers.

Undersheriff Kyle Rosa said the number of incidents went down in April, but they are much more serious, including one felony domestic assault with a weapon.

There have been several more non-domestic assaults, Rosa said, as well as a homicide in which a man is accused of standing in his neighbor’s driveway and shooting him through the window.

An abuser sometimes prompts a person to ask a judge for a Personal Protection Order to protect themselves from threats, harassment, stalking or harm from that abuser. PPOs are good for about six months, but Michigan recently extended until July 21 all those that were set to expire before June 1.

The most dangerous time for a victim is when they are attempting to leave or have left an abuser, with statistics showing that assaults requiring a visit to an emergency room go up during that time, as do homicides, Boettcher said. The homicide risk stays elevated for two years after a victim leaves, she said.

The abuser also goes back and forth between threats of “I’m going to kill you,” to “I love you, please come home,” Boettcher said.

For some, the WRC may be their only support, Schultz said.

“It’s a really difficult situation because it can be really isolating when a survivor wants to leave,” Schultz said. “She can feel really alone.”

Boettcher said what she went through 15 years ago set her on a path to becoming a better person. She was angry for a long time — at her abuser, at police officers there who did nothing when she called for help — until she knew she had to let go.

“Finally I realized that me holding on to all that anger was like me taking poison and waiting for him to die,” she said.

She began volunteering at a domestic violence shelter and found she loved it. She was good at it and she was helping people, she said. She got her master’s degree in clinical psychology, got remarried and when she moved to Traverse City two years ago there was an opening at the WRC.

Schultz says that anyone who has asked for help in a domestic violence situation is considered a survivor, Schultz said.

“As soon as somebody picks up the phone, reaches out and asks for help they become a survivor,” she said.

Schultz wonders if there will be a wave of survivors who step forward when things get back to normal.

“My question is, is that number exacerbated by COVID-19,” Schultz asked. “I don’t know the answer to that.”

The Women's Resource Center hotline is staffed 24/7 with local advocates who are ready to help. Please call: