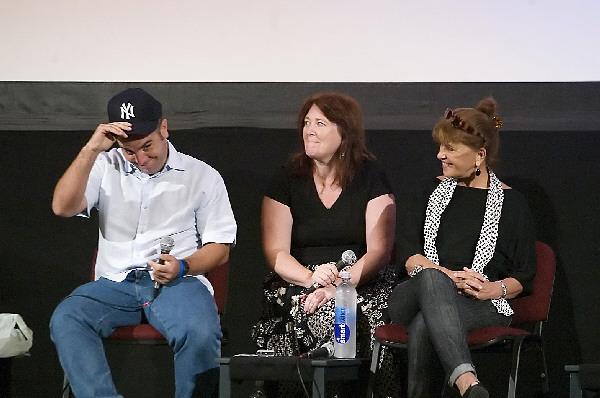 Cuban director Ian Padron puts on a New York Yankees hat as interpreter Bryn Lynch, center, and actress Mirta Ibarra watch during a "We Live in Cuba and We Make Movies" panel at the City Opera House. 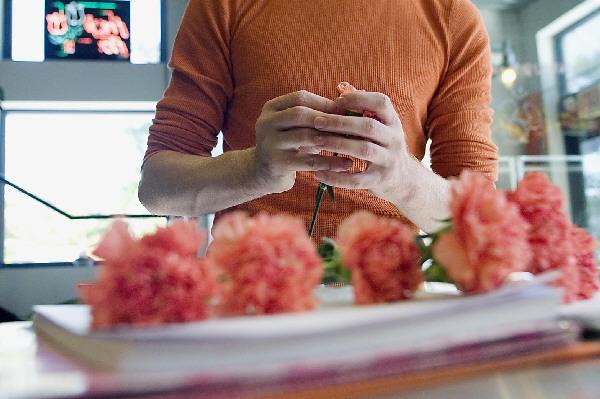 Floral artist Derek Woodruff works on arrangements for an upcoming wedding in his Floral Underground studio in Traverse City. Woodruff is a contestant on a TV reality show for floral designers on the Logo network.

Cuban director Ian Padron puts on a New York Yankees hat as interpreter Bryn Lynch, center, and actress Mirta Ibarra watch during a "We Live in Cuba and We Make Movies" panel at the City Opera House.

Floral artist Derek Woodruff works on arrangements for an upcoming wedding in his Floral Underground studio in Traverse City. Woodruff is a contestant on a TV reality show for floral designers on the Logo network.

Oh, what a year it was. From the first Cherry-T Ball Drop to a community mural project that brought together thousands of volunteers of all ages and abilities, the year was packed with events calculated to delight the senses.

The year began on a high — to a low — when an estimated 5,000 revelers crowded downtown Traverse City for the first Cherry-T Ball Drop. The combination New Year's countdown and "fun"raiser not only generated good will but 3,500 pounds of food and toiletry items for the Goodwill Inn food pantry. And while a last-minute power outage dimmed the lights on the "cherry" — a giant Zorb water walking ball --it didn't dim hopes for an annual celebration.

"It was fun, it was heartwarming, it was a great event," said Ruth Blick, director of marketing for Goodwill Industries.

Building on its success as a "community-based, community-supported cultural resource for the people of Michigan," the Wharton Center for Performing Arts took over management of the City Opera House and established its first Performing Arts Series at the restored Victorian landmark.

Although many applauded the move, saying it would boost the city's entertainment profile and offer area audiences more choices, some questioned whether the region, already struggling with lower concert attendance amid a poor economy, could support more programming.

Only time will tell.

Winter "up north" may be no joke for some, but the first Traverse City Comedy Arts Festival provided plenty of laughs.

The February event, organized by the Traverse City Film Festival, featured stand-up and improv by some of the country's funniest comedians, humorists and satirists including the always-caustic Roseanne Barr.

Hosts Michael Moore and Jeff Garlin even presented funny movies, including an outdoor screening of "Groundhog Day" — accompanied by a warming tent, patio heaters and hot drinks and food.

If you missed Joan Rivers' virtual appearance in "Joan Rivers: A Piece of Work," don't fret. The documentary now is out on DVD.

Cuban filmmakers charmed audiences at the Traverse City Film Festival with their talent, personality and stories of perseverance in a country that is poor in resources but rich in the arts.

Filmmaker Ian Padron ("Dreaming in Blue"), Director Juan Carlos Cremata Malberti ("Viva Cuba!"), actress Mirta Ibarra ("Strawberry and Chocolate") and Cuban Film Institute Vice-President Rosa Maria Rovira got a standing ovation as they took the stage at the City Opera House for a morning panel discussion. But they brought down the house when Padron presented festival founder Michael Moore with a baseball cap from the Havana-based team, Industriales, and donned a Yankees cap himself.

Stay tuned for a "sister city film festival" that could bring the Havana Film Festival to TC.

The Michael Cera movie "Youth in Revolt" opened in theaters early this year. Filmed partly in Frankfort and a Lake Leelanau RV park, the crew and its cast attracted crowds while cameras rolled in 2008.

Moviemakers picked Michigan to film in because of the state's tax incentive program.

Derek Woodruff made it to the finale of a floral design reality show and took the whole town with him.

Woodruff, owner of Floral Underground, starred on "The Arrangement" on the Logo network this fall. The final episode screened before more than 400 people at the State Theatre.

"People are in shock that I didn't win," he said. "Even pros in the industry." But the reception in Traverse City has been overwhelmingly positive, he said. "People no longer need to see my portfolio. They book me without meeting me."

Woodruff planned to spend Christmas with family in California, as well as meet up with the entire cast of "The Arrangement" for the first time since they finished filming in May.

"We accomplished everything we set out to do, which was to bring the best writers in America to Traverse City before packed houses and create great conversations about great stories," said founder and author Doug Stanton.

The yearlong series has grown into a premier book event, attracting authors and publicists who want to come to northern Michigan to reach readers.

It took a village — and 2,600 painted tiles — to raise a mural on the Front Street side of Maxbauer Ace Hardware.

The 13-by-50-foot Community Mural Mosaic was completed in November and depicts downtown Traverse City and its "bayscape" during the National Cherry Festival.

"When you walk down there now you see people commenting on it," said Ace store operations manager Shawn O'Brien. "So many people I know who drive past have said it's something to look at while waiting for the light. It's certainly more welcoming than the white wall that used to be there."

The project took eight months and brought together artists and non-artists, locals and summer visitors, young and old, who paid $5 each to paint a 6-inch-square tile at one of several community painting events organized by Artcenter Traverse City. Sue Flannery's entire family participated, painting 13 tiles adjacent to each other.

"Family members can come back in 30 years and view the mural with new family members and actually point out which part of the mural we painted," Flannery posted on the Artcenter website.

National acts continue to make the trek to Traverse City, whether it's Blues Traveler rockin' a paella-fueled crowd at Clinch Park or Sheryl Crow and Colby Caillat tunes wafting across Green Lake. Jason Mraz warmed a crowd at the latest season concert Interlochen ever hosted.

But local artists made world headlines this year, including Breathe Owl Breathe's glowing review from The Independent in London for their latest album, "Magic Central," and Song of the Lakes wowing Swedish crowds with some Great Lakes-inspired music.

Possibly the most famous band we hadn't heard of, Salem, with Traverse City's John Holland and Heather Marlatt, got a shout-out on a recent episode of "Sound Opinions," from WBEZ in Chicago, where the band spends most of its time, for their "King Night" album. The public radio show especially liked "Redlights" on the new album. The show said Salem is "one of the pioneers of the style alternately called drag, witch house or haunted house." We want in on that.

And yet there are still plenty of places to eat in Traverse City, as new restaurants open almost as fast as old ones close.

The Bay Leaf went with "European rustic" to replace the tropical Catch Island flavors. A new Grand Traverse Pie Co. is planned for 101 N. Park St. Blue Tractor swallowed up the Cuban restaurant so well you might not even know it was missing, unless you're hankering for, well, a Cuban sandwich.

And don't forget the bustling east end of Front Street, with the Cooks House in new digs on Wellington, Nine Bean Rows in the old Cooks House and, mmmm, Simply Cupcakes nestled in between.

Despite the revolving door, northwest Michigan continues to make a name in foodie circles, with an emphasis on local, fresh and delicious.