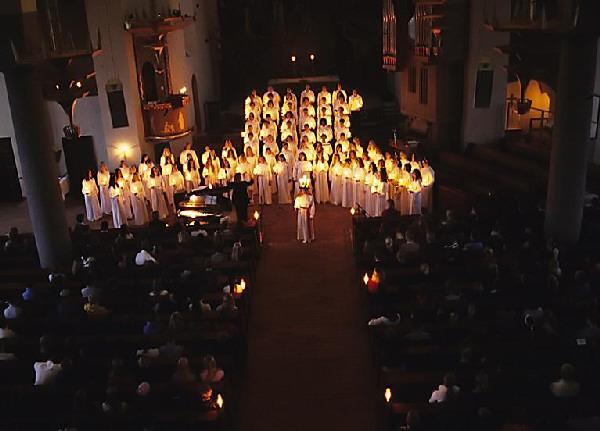 A photo by Paola Gianturco from her exhibition of festivals for women; this one is of a Santa Lucia celebration in Sweden. 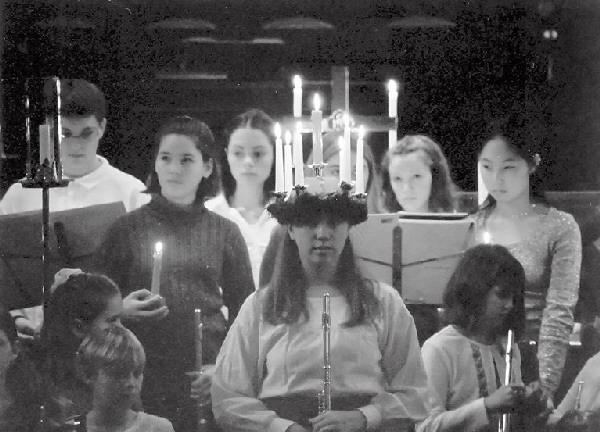 A previous St. Lucia celebration with the traditional crown of candles.

A photo by Paola Gianturco from her exhibition of festivals for women; this one is of a Santa Lucia celebration in Sweden.

A previous St. Lucia celebration with the traditional crown of candles.

Lily Schwartzbach remembers the dresses, the candles and the brown cookies.

Schwartzbach, 16, is a Rotary exchange student in Traverse City this year and will be missing the St. Lucia celebrations in her hometown of Jyllinge, Denmark.

The Scandinavian traditions will be in full force at the St. Lucia Celebration at the Dennos Museum Sunday, Dec. 12, whether in the ginger cookies, called "pepparkaka" in Swedish, or the St. Lucia walk, complete with white dresses, a crown of candles and the traditional Santa Lucia song, which Schwartzbach is quick to sing.

The Scandinavian holiday dates back to 284 when Lucia, a young Italian girl, refused to renounce her faith.

"She declared her Christianity to the Romans," said Lisa Johansson, a half-Swedish musician helping organize Sunday's events. Lucia was executed when she was 20 and later declared a saint when her image appeared in the sky across Europe.

"I think it was probably the northern lights," Johansson said, but it made for a good story.

Lucia also was dedicated to helping the poor and anyone bringing a canned or dry good item for the Father Fred Foundation will receive $1 off the admission price of $7. Admission for Dennos Museum members is $5.

The celebration is scheduled for 1-5 p.m., with the concert scheduled for 3 p.m. in Milliken Auditorium. Johansson, who has directed St. Lucia concerts for 25 years, will be directing flutists from the Northwind Flute Studios.

"It's happy-sad Eastern European music," Lisa Johansson said. "A little bit like Celtic, kind of a blend. They're neighbors after all," she said of the Scandinavians and Celts. "They conquered back and forth."

Other entertainment includes singer-songwriters Emma Cook and Dianne and Noemi DeRib; vocalist Sage DeAgro, poet bard Norm Wheeler; and a guest appearance by Song of the Lakes. Both Johanssons are members of the group, which toured in Sweden this summer.

Emma Cook will wear the crown of candles for the St. Lucia walk, which promises to be dramatic and beautiful, said Diana Bolander, curator of education and interpretation for the Dennos Museum Center, 1701 E. Front St., on the main campus of Northwestern Michigan College.

"I'm Swedish and I remember seeing pictures of us all dressed up with candles and crowns," said Bolander, whose ancestors on her father's side immigrated to the U.S.

St. Lucia celebrations are often linked with the winter solstice or seen as a lead-in to Christmas.

This program is presented in conjunction with the Celebrating Women exhibition of photo journalist Paola Gianturco's photography featuring festivals for women in the countries of Swaziland, Poland, India, Sweden, Brazil, and Morocco. Admission to the St. Lucia Celebration includes admission to Dennos Museum exhibitions.

86, of Fife Lake, died Tuesday, April 6, 2021. He is survived by his wife, Claudia (Rivas) Chalker; children, Ray, Teri Jean, Darryl, Dwain and Michelle; stepchildren, Brett and Brandy; and many, many grandchildren and great-grandchildren. He worked at and owned Auto Body Repair Shops. Priva…