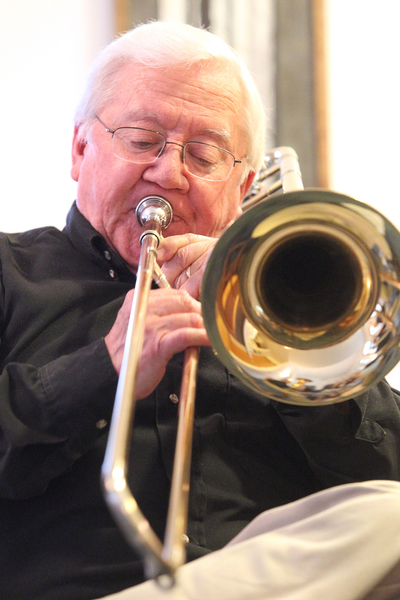 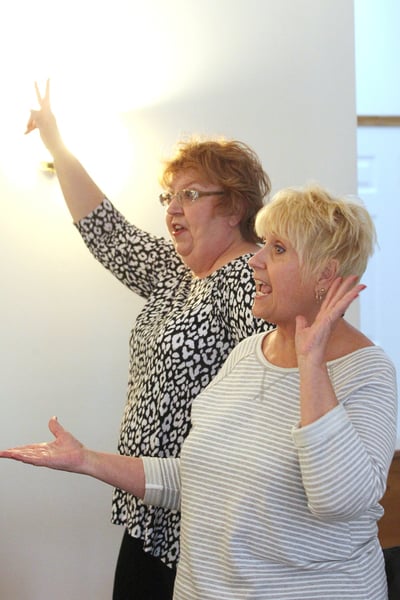 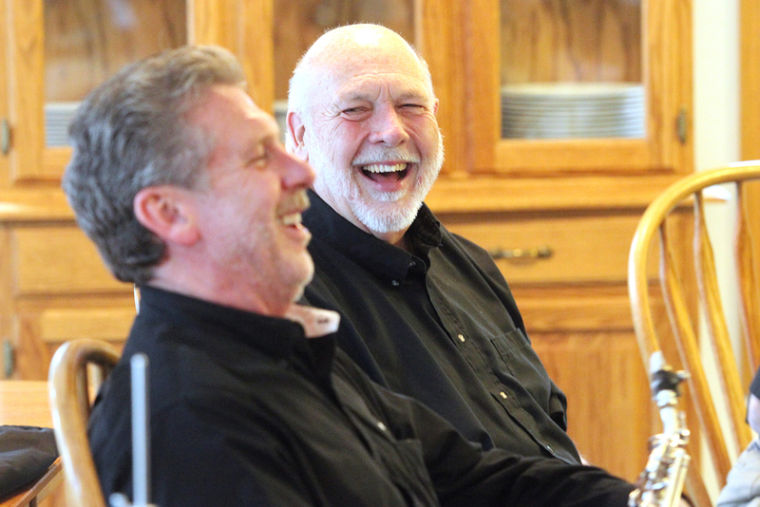 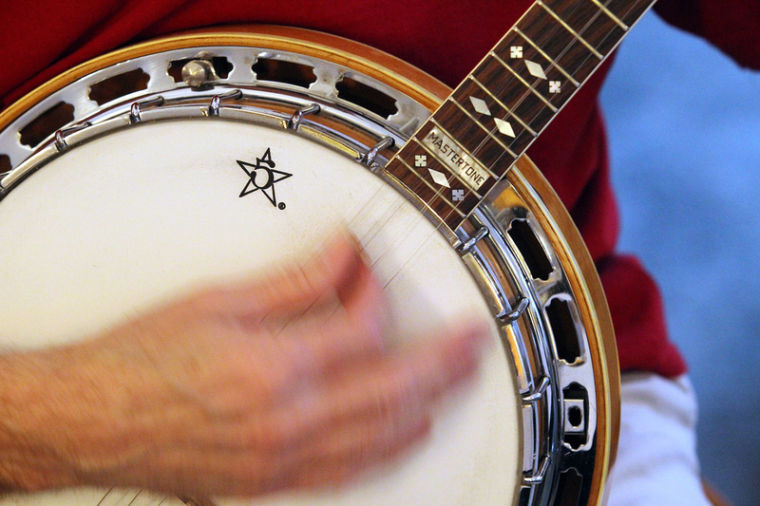 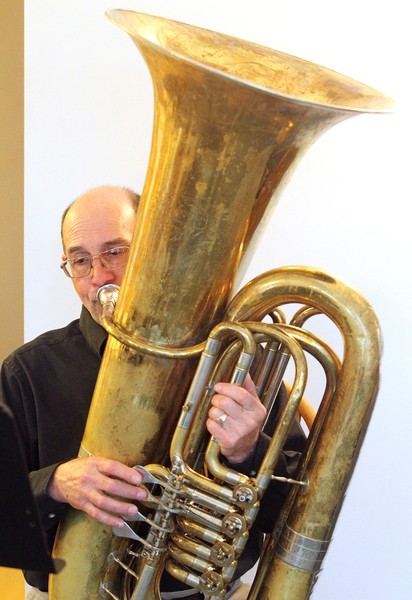 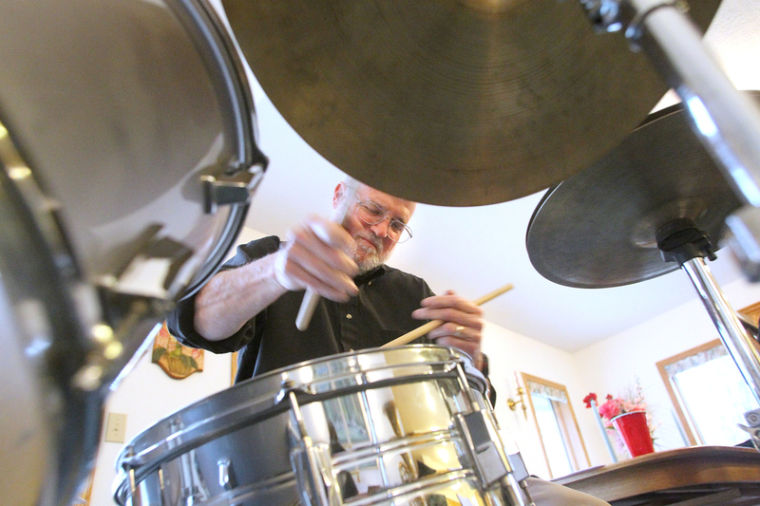 Don Frost plays the drums during a rehearsal of The Backroom Gang, Tuesday. 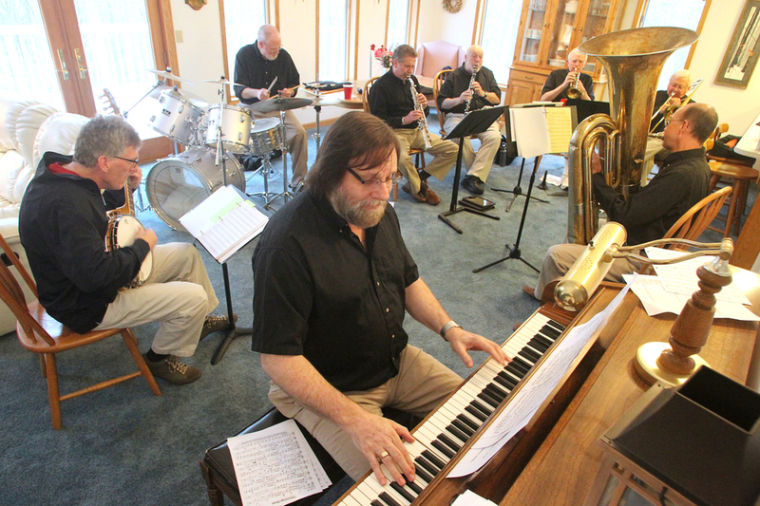 Don Frost plays the drums during a rehearsal of The Backroom Gang, Tuesday.

TRAVERSE CITY — It never takes long for the members of The Backroom Gang to get themselves back in sync.

The band has been around for 45 years and most of its members started playing with the group decades ago. They’ve survived the ebb and flow of musicians coming and going. They’ve also survived a decline in interest in their genre.

The Dixieland jazz ensemble gathered into a familiar circle Tuesday night in Hal and Jan Fisher’s home near Suttons Bay. The seven instrumentalists and two vocalists wanted one last brush-up before their first major gig of the busy season. It’s an appearance at the Traverse City Elks Lodge #323 at 5:30 p.m. Saturday.

“They’ve all been doing it for so long, it just falls in place,” said Jan Fisher, one of the group’s two female vocalists. “It’s mostly goofing off ... it’s pretty loose.”

Don Frost set the tempo on the drums, and the circle of band members picked up the music.

It’s a familiar gathering consisting of a bit of musical rehearsal interspersed between a lot of camaraderie.

“We have to get together and get in sync,” said Don Frost, the group’s drummer. It’s a chore that doesn’t take long, even after a winter apart. Only two of the group’s members use sheet music, the rest know the tunes by heart, he said.

Frost, a retired obstetrician/gynecologist with a penchant for constructing working steam locomotives, claims he is the “illegitimate” musician of the bunch despite playing music since age 15.

Heck, a tally of the members’ combined years of music experience would require a calculator.

The group’s youngest member, Fred Szczepanski, 57, plays piano and sings. Its oldest member is in his early 70s, Frost said.

“It’s amazing that the band has been together this long,” Frost said. “Most of us are on the high side of our 60s.”

The gang certainly has seen changes during the years. Frost remembers being recruited to play washboard with a precursor to The Backroom Gang in 1969 while its founding members lived in Ann Arbor. Two years later, the group formed officially.

They typically got together in the back room of the eatery to play music, hence the name of the band. It later moved to Traverse City and played a regular gig at Dill’s Olde Town Saloon from 1976 to 1999. Between then and now, the ensemble toured to jazz festivals, plays a handful of gigs each summer and performs a series of five charitable shows each summer at a local church.

Dixieland is the oldest form of jazz and is very lively, said Frost.

“This is the old type of jazz,” said Bob Core of the Cherryland Jazz Club, the group sponsoring the show. “It’s very melodic.”

“We call it happy music. It’s really hard to just sit there and listen to the music unless you’re a grump. Their feet will start to move like this,” Frost added.

Anybody interested in a taste of the genre can attend the Saturday evening concert at the Traverse City Elks Lodge #323, 625 Bay St. Tickets to the show cost $10 and the doors open at 5 p.m. The Backroom Gang will begin playing at 5:30 p.m.

Editor's note: Fred Szczepanski's last name was misspelled because of a reporter's error. His name has been corrected. — Feb. 19, 2020.

BENZONIA — Michael Ray Smith, of Benzie, passed away Oct. 16, 2020 at the age of 67. Michael was born on July 11, 1953 in Ludington to his parents Raymond and Evelyn Smith. Michael was an avid collector of guns, knives and other items. He loved to read, hunt, and fish. He especially loved hi…

was born March 8, 1949 in Hendersonville, North Carolina, to John and Yvonne Gordon. She passed away on Oct. 15, 2020. Ramona is survived by husband Bob; daughter, Angela; nine grandchildren; and 12 great-grandchildren. In lieu of flowers or cards she requested any memorials to the butterfly…